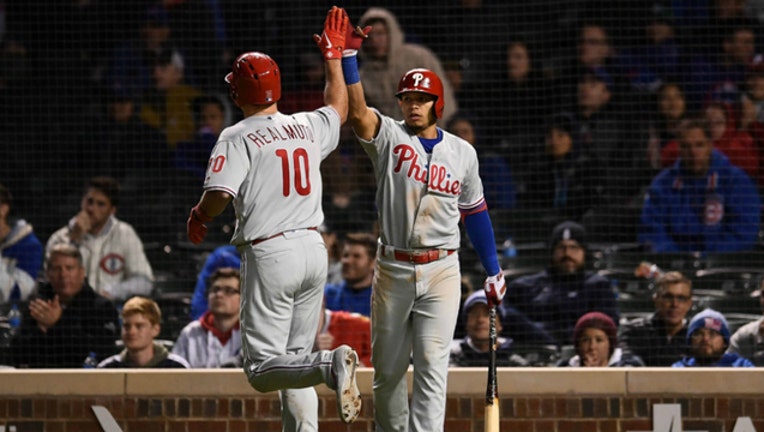 CHICAGO (AP) - The memories came flooding back to Jake Arrieta as the fans showered him with cheers when he stepped to the plate for the first time.

His 4½ seasons in Chicago included an NL Cy Young Award in 2015, a drought-busting World Series championship in 2016, two no-hitters and an All-Star selection. There were plenty of ovations, just none quite like this.

Arrieta allowed one run over six innings in his return to Wrigley Field, J.T. Realmuto hit a solo homer in the 10th and the Philadelphia Phillies beat the Chicago Cubs 5-4 on Monday.

Realmuto connected with two outs against Kyle Ryan (0-1), driving a 1-2 fastball a few rows into the left-field seats to decide the opener of a four-game series between the NL East and Central leaders. But the night belonged to Arrieta.

He got a warm welcome on a chilly evening during the pregame introductions and was greeted with a standing ovation when he came to the plate in the third inning. He responded by tipping his helmet toward the crowd while Yu Darvish stepped away from the mound.

"It felt great," Arrieta said. "Kind of something that I experienced pretty much from Day 1 here with the fan base. Cubs fans all across the country, all across the world, they really respect and appreciate what guys are able to do here for them. It means a lot. It really does. I'll never forget this city, the fan base, the organization and everything that they did for me. It was 4 1/2 incredible years of my career."

It was a fitting reception for a pitcher who played such a huge role in turning those "Lovable Losers" into drought-busting champions. Arrieta left to sign with Philadelphia before the 2018 season. But the mark he left in Chicago won't fade anytime soon.

"I loved it," Cubs manager Joe Maddon said. "I absolutely loved it. Very happy that our fans - which you would expect from our fans - would acknowledge him like that. ... Jake deserved it. Absolutely."

Arrieta gave up eight hits in his first appearance at Wrigley Field since beating the Los Angeles Dodgers in Game 4 of the 2017 NL Championship Series.

"It brings back a lot of memories of what we were able to do as a team, from beginning in '13 all the way through '17," Arrieta said.

Héctor Neris (1-1) worked a scoreless ninth. Adam Morgan struck out Jason Heyward leading off the 10th, and Juan Nicasio earned his first save since last June 28 when he got Daniel Descalso to ground into a double play after giving up a single to Albert Almora Jr.

Philadelphia scored three runs with two outs in the sixth against Darvish for a 3-1 lead. Realmuto hit an RBI single, and César Hernández followed with a two-run triple to right that ricocheted off the side wall and bounced over Heyward's head.

The Cubs scored three in the eighth against Seranthony Domínguez. Descalso drove in two with a triple to left-center, then was rewarded home when the relay from shortstop Jean Segura ricocheted off his right foot and into Chicago's dugout.

Philadelphia tied the game in the ninth against Brad Brach when Maikel Franco doubled and came home on a two-out bloop single to right by Segura.

Anthony Rizzo had three hits, including an RBI single.

Cubs: SS Javier Báez (jammed right heel) sat out his first game after starting the first 44. He was hurt fielding a grounder in the third inning and exited in the sixth. ... Closer Brandon Morrow has started throwing again after experiencing a setback in his recovery from offseason elbow surgery. President of baseball operations Theo Epstein said Morrow threw from 45 to 60 feet Monday in Arizona. The Cubs shut down Morrow's rehab last month after he didn't recover well from a bullpen session. ... Epstein also said reliever Pedro Strop (strained left hamstring) threw a 25-pitch bullpen session Monday.