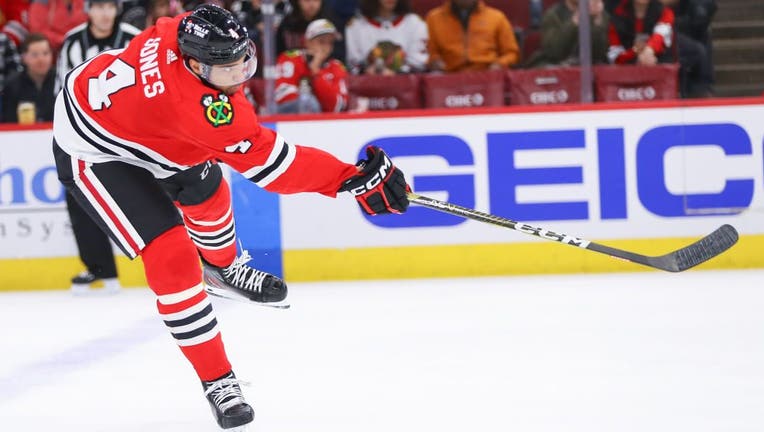 Chicago Blackhawks Defenceman Seth Jones (4) looks on after shooting the puck during a game between the Buffalo Sabres and the Chicago Blackhawks on January 17, 2023 at the United Center in Chicago, IL. (Photo by Melissa Tamez/Icon Sportswire via Get

CHICAGO - Seth Jones was frustrated after he missed the net on a prime scoring opportunity in the second period.

The All-Star defenseman felt a lot better when the game was over.

Jones scored two goals, including the winner 2:24 into overtime, and the Chicago Blackhawks rallied for a 4-3 victory over the Buffalo Sabres on Tuesday night.

Philipp Kurashev had a goal and two assists for Chicago, which was coming off an ugly 8-5 loss to Seattle on Saturday. Connor Murphy also scored, and Petr Mrazek made 30 saves.

Chicago trailed 3-1 after two periods, but Jones rallied the Blackhawks in the third. Kurashev got a piece of Jones’ shot for his sixth goal at 1:34, and Jones tied it at 3 with a long wrist shot from the point with 56 seconds left.

Anderson was screened by Blackhawks forward Tyler Johnson on Jones’ third goal of the season, and the goaltender felt there should have been an interference call.

"On the replay, from what I’m seeing, obviously I don’t make the calls, but his left foot’s in the crease, his elbow goes into my glove, not allowing my glove to make the save," said Anderson, a native of nearby Park Ridge.

Buffalo defenseman Mattias Samuelsson had a shot go off the post before Jones’ tying score.

A streaking Jones took a pass from Johnson in overtime, and his backhand got under Anderson before sliding over the line. Jones yelled and pumped his arm after the puck went in.

Chicago jumped in front on Murphy’s fourth of the season. The defenseman got a nice pass from Kurashev and beat Anderson with a wrist shot from the right circle 8:41 into the first.

Olofsson tied it at 1 when he knocked in a loose puck in front at 12:15, and Buffalo grabbed the lead on Thompson’s goal with 6.9 seconds left in the first. Jeff Skinner passed it over to Thompson, who eluded Jones before poking it in.

It was Olofsson’s third goal in his last four games and No. 18 on the season. He has five goals in five career games against Chicago.

Thompson scored his 32nd goal in 43 games after he had a career-best 38 in 78 games last season. He had no goals and two assists in his previous five games.

The Sabres opened a 3-1 lead 6:21 into the second when Krebs converted a slick backhand on a breakaway. Blackhawks forward Max Domi set up Krebs’ first career short-handed goal with an ugly turnover.

Blackhawks goaltender Alex Stalock was in the mix to start, but he was placed in concussion protocol before the morning skate. Jaxson Stauber was recalled from the minors to back up Mrazek.

Stalock sustained a concussion Nov. 1 against the Islanders, and then returned on Dec. 23 against Columbus. Chicago coach Luke Richardson said Stalock was "bumped in practice" on Monday.

"You never know how things react with people but we’re just going to take precaution and put him on that protocol right now and just hopefully it settles down quicker than last time," Richardson said.

Blackhawks: At Philadelphia on Thursday night.