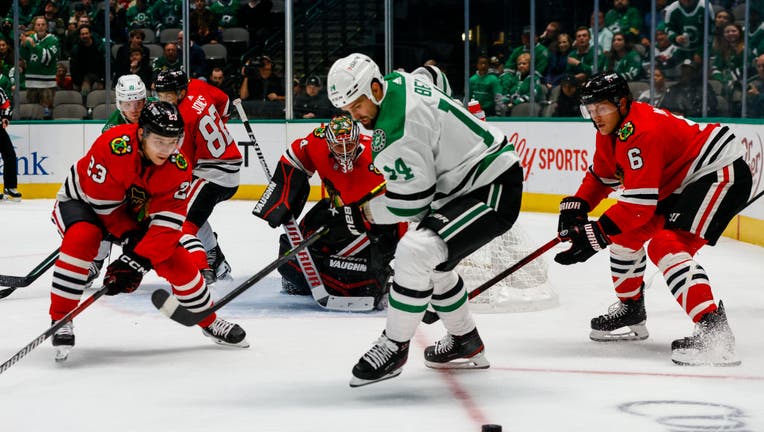 DALLAS - Jason Robertson was merely a footnote on a night he tied the Dallas record for points in consecutive games.

History-making rallies can do that.

Radek Faksa scored with 1:33 remaining, and the Stars erased a three-goal deficit in the final 10 minutes for a 6-4 victory over the Chicago Blackhawks on Wednesday night.

After allowing a goal at 9:37 of the third to fall behind 4-1, Dallas became the first team in NHL history to trail by at least three goals that late and win in regulation, according to STATS.

As for Robertson, he scored the first goal of the game to give him points in 13 consecutive games, getting even with Dave Gagner from the first season the franchise was in Texas after moving from Minnesota in 1993.

Then Robertson scored the last on an empty-netter to finish a five-goal third for the Stars, who extended Chicago's losing streak to five games, all in regulation, while beating the Blackhawks for the fifth consecutive time.

At that point, the crowd had already been sent into delirium, witnessing the first rally from a three-goal deficit in the third period in the NHL this season, and the first for the Stars since 2015-16.

"When you're on the road like that and a crowd gets in it and the team gets momentum, it's hard to stop," said Chicago's Seth Jones, who scored against his hometown team in a three-goal second period to erase a 1-0 deficit. "We have to find a way to just calm down."

Less than a minute after Maxi Domi put the Blackhawks up 4-1, captain Jamie Benn scored for Dallas on a power play after Domi was called for tripping.

About four minutes after that, Mason Marchment and Ty Dellandrea scored 14 seconds apart to get the Stars even.

Dallas probably would have settled for overtime, but Faksa sent a rebound toward the net from a nearly impossible angle along the goal line in the final two minutes.

Faksa raised his arms as if he had scored, but play continued. It was stopped soon after, and replay showed the puck sneaking under the legs of Petr Mrazek and crossing the goal line before getting swept out by Chicago forward Jason Dickinson.

"I wasn’t sure because I was kind of behind the goal line," Faksa said. "I knew at least half the puck was in, but I couldn’t tell if it was all the way in. Right away, when I came on the bench, they told me it’s in."

After Jones got Chicago even, Andreas Athanasiou and Connor Murphy pushed the lead to 3-1 in the second. Captain Jonathan Toews had his 500th career assist on Murphy’s goal.

The Central Division-leading Stars outshot the Blackhawks 22-5 in the third, but all the pressure didn't seem like it would matter after Domi's fifth goal of the season.

"We kind of didn't have the same work ethic and sat back a little, not trying to protect it, they were coming hard," Chicago coach Luke Richardson said. "We just didn't handle it well. On every goal, it was something probably different."

Robertson, who started the night third in the NHL in goals, has 16 goals overall and 14 during the streak. The 23-year-old has 10 assists during the run.

Four players in the franchise’s Minnesota era had longer streaks, including Brian Bellows’ record 20-gamer in 1986.

Dallas defenseman Jani Hakanpaa wasted no time getting retribution after Chicago's Jarred Tinordi leveled Dellandrea with a crunching hit near center ice in the first.

Hakanpaa pushed Tinordi from behind as both skated into Dallas' offensive zone, where they dropped the gloves and exchanged several punches. There was no penalty for the hit.

It was Jones' first game since Oct. 29. The defenseman had been sidelined by a right thumb injury.

Stars: Dallas welcomes former coach Rick Bowness for the first time since his offseason departure as Winnipeg visits Friday. Bowness missed the Jets' first trip to Texas because of COVID-19.