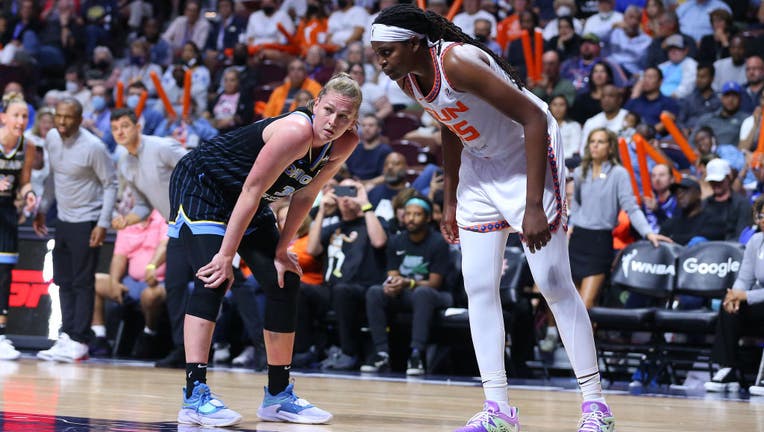 UNCASVILLE, Conn. - DeWanna Bonner and Courtney Williams each scored 19 points to help the Connecticut Sun rout the Chicago Sky 104-80 on Tuesday night and force a decisive Game 5 in their WNBA semifinal series.

Alyssa Thomas added 17 points for Connecticut, which will travel to the second-seeded Sky for the winner-take-all game on Thursday night.

It’s the second consecutive playoff series for each team that has gone the distance. Both Chicago and Connecticut had to go on the road in the third game of their opening-round series and win to reach the semifinals because of the new playoff format that saw the higher seeded team host the first two games of that best-of-three set.

Connecticut coach Curt Miller has been saying for the entire series that his team would have to make the game "messy" to beat the Sky. Getting into a high-scoring game wouldn’t benefit the Sun.

That wasn’t the case Tuesday, as the Sun raced to a 22-6 lead, scoring 10 of the first 12 points. Thomas was a big reason why with seven points, four rebounds and two assists in the first five minutes. The All-Star forward had six points total in Game 3 and seven in Game 2 — both Connecticut losses.

The Sky got back within eight by the end of the first quarter, but couldn’t get much closer as Connecticut had an answer for every Chicago run — thanks to Thomas, Bonner and Jonquel Jones.

Chicago got within 38-33 midway through the second quarter before the Sun went on a 15-5 run to restore the double-digit advantage. DiJonai Carrington had five points during the burst that was capped by Thomas’ layup with 1:01 left in the half.

Candace Parker, who had been stellar in the first three games of the series, scored her first points of the game on a 3-pointer 16 seconds later that got the Sky within 53-41. Connecticut scored the final five points, including a layup just before the buzzer by Carrington that made it 58-41 at the break.

WNBA Commissioner Cathy Engelbert honored Sun forward Brionna Jones before the game with the league’s Sixth Person of the Year award. Jones received 53 of the 56 votes from a national media panel. It’s the first time Jones has won the award.

The Sky are trying to be the first team to repeat as champions since Los Angeles did it in 2001-02. Six other defending champions reached the finals since then, but all lost in that round. ... The UConn women’s basketball team was in attendance, sitting a few row up from the Chicago Sky bench. ... Bonner moved into seventh on the all-time postseason scoring list in WNBA history.