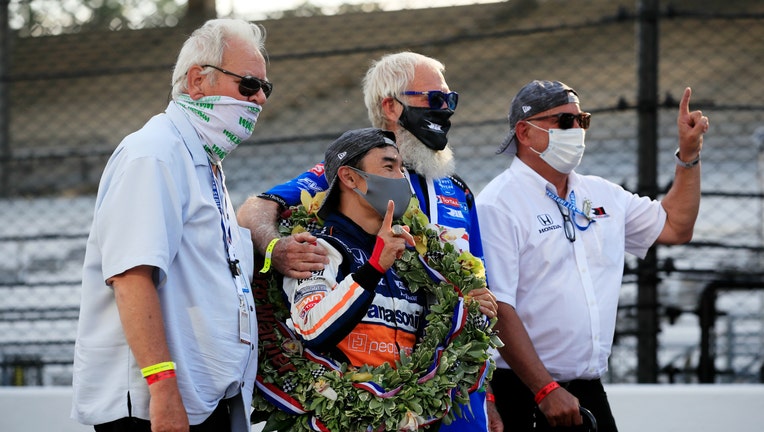 INDIANAPOLIS, Ind. - The long, white beard cascading out from David Letterman's mask as he climbed onto the new-look winner's podium at Indianapolis Motor Speedway was evidence of just how long it's been since the longtime "Late Show" host joined team co-owner Bobby Rahal in celebrating an Indy 500 victory.

While the Honda-powered cars of Andretti Autosport had been the talk of the paddock leading up to "The Greatest Spectacle in Racing," which was postponed from its typical Memorial Day weekend date because of the coronavirus, it was the Hondas behind Rahal Letterman Lanigan Racing that managed to dash Scott Dixon's hopes of a second Indy 500 win.

"To even be here, to be in the pits, to be part of the activity -- this is some DNA we're talking about," said Letterman, who grew up in the Broad Ripple neighborhood of Indianapolis. "We're always as kids on the outside-looking in, and now we're on the inside and enjoying it and winning the race. For me it's a thrill."

Dixon had dominated all race before Sato found himself in the lead with five laps to go. And when teammate Spencer Pigot wrecked heavily exiting Turn 4 to bring out a caution and effectively end the race, not only did Sato have a second victory of his own but teammate Graham Rahal had a third-place finish to match the best of his career.

Letterman is an astute enough racing aficionado to know winning the Indianapolis 500 is no easy task, even though it may have once seemed like it. He had bought a share of the team formed by 1986 race winner Bobby Rahal in the mid-90s, but he began spending more time in the garage area in 2004, when the team adopted its current name.

That's when Rice won just about everything -- the pole, the pit stop competition and ultimately the race.

There have been plenty of near-misses in the intervening years. Vitor Meira was second to Dan Wheldon in 2005, and Sato crashed while challenging Dario Franchitti for the win in 2012. Graham Rahal fifth three years later, and Sato finished third behind Simon Pagenaud and Alexander Rossi just last year.

Perhaps it was all those close calls that made for some emotional words from Letterman to his winning driver on Sunday.

Graham Rahal did a fine job in his own right. He laid low most of the hot, sunny afternoon at Indianapolis Motor Speedway, steering clear of wrecks that claimed Rossi and others, and putting himself in position for the biggest win of his career.

There's no telling whether he would have had anything for Sato and Dixon if IndyCar decided to red-flag the race and force a green-white-checkered finish. But it was nonetheless a photo-worthy finish when Sato crossed the finish line flanked by his teammate on one side and Dixon on the other, especially amid the canyon-like ocean of empty front-stretch seats.

"We belong in the conversation of who are the best teams out there," Bobby Rahal said, "and I take great pride in that. As an owner, you just know how hard it is to put an organization together to do all this."

Rahal joked that he's never introduced as a three-time IndyCar champion, but rather the winner of the 1986 Indy 500. That prompted Letterman to joke, "I'm typically introduced as a television has-been, so for me this is a delight."

"I have very little to do with the functioning of this organization, so all of this is reflected positively on me," he said. "When we won it in 2004, honest to God, it was like I had been hooked up to some powerful electrical generator, and I thought I would never experience anything like this again in my life. It was life-changing experience, and here we are in 2020 and I get to go through this again."