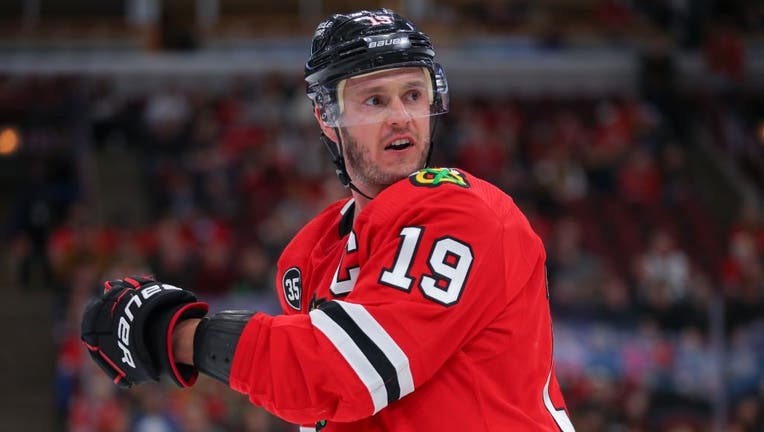 Chicago Blackhawks center Jonathan Toews (19) reacts to a call during a game between the Buffalo Sabres and the Chicago Blackhawks on March 28, 2022 at the United Center in Chicago, IL. (Photo by Melissa Tamez/Icon Sportswire via Getty Images)

CHICAGO - Tage Thompson scored the tiebreaking goal on a fortunate bounce with 10.6 seconds left and the Buffalo Sabres rallied from four down to beat the Chicago Blackhawks 6-5 on Monday night.

Victor Olofsson had two goals and an assist to help the Sabres win for the first time in three games. Kyle Okposo, Vinnie Hinostroza and Alex Tuch also scored for Buffalo.

Thompson, the team leader with 28 goals, broke his stick on a shot from left wing. The puck caromed off the boards behind the net and hit Chicago goaltender Kevin Lankinen’s left skate before going in.

"I was already halfway to the bench," Thompson said. "I turned around and saw them chasing me down. I had no clue."

"When it went against that back wall, it does click in your mind that it can bounce back and back in," Granato said.

Tuch forged Buffalo’s second tie of the night with a slot deflection of Olofsson’s pass with 2:14 to play. Olofsson took Casey Middlestadt’s feed and relayed it to Tuch.

Alex DeBrincat gave Chicago a 5-4 advantage midway through the third period with his 38th goal of the season and fourth in four games, but the Blackhawks blew yet another lead.

"We stopped playing the game the right way," interim coach Derek King said. "They took it upon themselves to do what they wanted to do. We’re disappointed. We’ll see the next game how disappointed they are."

"We just let them walk in everywhere, and make plays through us, and no sticks on pucks, and go down the list," Toews said with disgust.

Buffalo’s comeback began when Olofsson scored twice in just under six minutes, beating Lankinen on a one-timer from the right circle with the Sabres on a power play, then sending a wrist shot over Lankinen’s glove from the left circle 10:24 into the second.

Buffalo cut the deficit to 4-3 on Okposo’s deflection of Dylan Cozens’ shot at 14:32, a drive that caromed off the right skate of Blackhawks defenseman Erik Gustafsson just before it beat Lankinen.

The Sabres tied it on former Blackhawk and Chicago native Hinostroza’s 11th goal, a tip rebound off a slot scramble 2:39 into the third.

"There’s no one in there who has a me-first mentality," Thompson said of his teammates. "You see one guy jump over the boards and go hard. You want to follow that up with another good shift."

Lankinen made 29 saves. Dustin Tokarski had 15 for Buffalo.

The Blackhawks dominated the first 22 minutes, scoring four times on nine shots. Then the Sabres countered with a 15-shot second period and pulled within a goal after 40 minutes.

De Haan opened the scoring at 7:53 of the first, converting Taylor Raddysh’s feed. Lafferty made it 2-0 at 13:44 with a deflection of Jake McCabe’s point shot.

The Blackhawks led 3-0 on Toews’ 10th goal of the season in his 999th NHL game. His power-play backhand was set up by Philipp Kurashev on a give-and-go with 3:05 left in the first.

At 1:21 of the second, Jones’ three-quarter speed wrist shot beat Tokarski to make it 4-0.

NOTES: De Haan’s goal gave him two in a season for the first time since 2016-17. The defenseman had scored once in each of the last four seasons. … Buffalo C Colin Miller went into COVID-19 protocol on Sunday. … Chicago forward Tyler Johnson came off injured reserve and out of concussion protocol before the game, going back in the lineup on the third line. … Chicago F Kirby Dach didn’t dress because of a non-COVID-19 illness.

The Sabres open a four-game homestand against Winnipeg on Wednesday.

The Blackhawks begin a two-game road swing at Florida on Thursday.