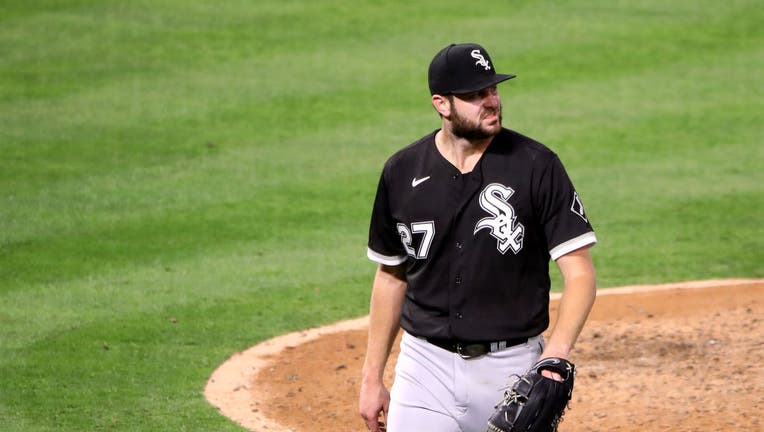 Lucas Giolito #27 of the Chicago White Sox reacts at the end of his mound appearance against the Los Angeles Angels during the sixth inning on Opening Day at Angel Stadium of Anaheim on April 01, 2021 (Photo by Katelyn Mulcahy/Getty Images)

ANAHEIM, Calif. - Mike Trout smacked a single down the left-field line to drive in David Fletcher in the eighth inning, and Angel Stadium rocked with the roar of a crowd much bigger than the 13,207 masked people in attendance.

The Angels’ first opening day win since 2013 felt big in almost every way to a team and a sport that could use some good news.

Trout delivered the tying single and Shohei Ohtani scored the go-ahead run on Albert Pujols’ groundout in the eighth inning, leading Los Angeles’ rally to a 4-3 victory over the Chicago White Sox on Thursday night.

Trout and Pujols came up big in the eighth against powerful Chicago reliever Aaron Bummer (0-1) in front of the biggest sports crowd in the Los Angeles metroplex since the start of the pandemic.

"It was nice having the fans back in the stands," Upton said. "There was a lot of energy, and it kind of locks you in. Bummer has got great stuff, and we were just trying to fight him."

Fletcher opened the eighth by beating out an infield single off Bummer’s glove. Second baseman Nick Madrigal then made a throwing error on a hard-hit grounder from Ohtani, and Fletcher took third on a passed ball before Trout smacked a single to left.

Upton drew an 11-pitch walk to load the bases for Pujols, whose high-bouncing groundout easily scored Ohtani. Pujols’ RBI was the 16th of his career on opening day, the most among active players.

"(Bummer) does his job, gets groundballs, and the last run scored was on a chopper," La Russa said. "That’s baseball. If you put the ball in play, good things happen, and it happened for them."

Mike Mayers (1-0) pitched the eighth, and Raisel Iglesias needed just eight pitches in the ninth to earn the save in his Angels debut.

Adam Eaton hit a tiebreaking, two-run homer in his first game back with the White Sox.

Lucas Giolito retired the Angels’ first 11 batters and pitched two-hit ball into the sixth inning for Chicago. The Southern California native baffled the Angels’ lineup his first time through, striking out six of nine largely with his changeup.

Giolito left with a 3-2 lead, but the Angels jumped on Bummer and kept new closer Liam Hendriks out of the game.

"Giolito threw a heck of a game and put us in position to win," Eaton said. "Trout is barreling on 96 (mph), and Upton comes up and puts a really good at-bat together. Circumstances were tough, but that’s kind of how we drew it up for our (pitchers)."

Dylan Bundy yielded six hits and three runs with six strikeouts over six innings in his first opening day start for the Angels.

White Sox: OF Adam Engel went on the 10-day injured list with a strained right hamstring, and LHP Jace Fry was placed on the 10-day IL to recover from a microdiscectomy.

The 76-year-old La Russa is back in Chicago’s dugout 34 years after he was fired and nine years after he last managed in the majors with Pujols and the Cardinals. La Russa was a special adviser to the Angels’ front office last season.

La Russa’s first significant strategy decision of the season perhaps showed a willingness to change with the times: He pulled Giolito after 87 pitches in the sixth inning so he wouldn’t face Trout a third time.

Pujols went 0 for 4 with one huge RBI in the 21st opening day start of his career. The 41-year-old Pujols matched Eddie Murray and Al Kaline for the second-most opening day starts in baseball history, trailing only Pete Rose’s 23.

Pujols is one of five players to make at least 10 opening day starts with the Angels. Garret Anderson holds the franchise record with 13, while Trout has started the last nine straight.

Fletcher began his fourth big league season by going 1 for 4 with two uncharacteristic strikeouts as the Angels’ leadoff hitter and second baseman. He signed a five-year, $26 million contract earlier in the day.

Dallas Keuchel looks to extend his career-long mastery over the Angels when he takes the mound against Andrew Heaney. Keuchel is 12-2 with a 3.36 ERA in 18 appearances against Los Angeles.