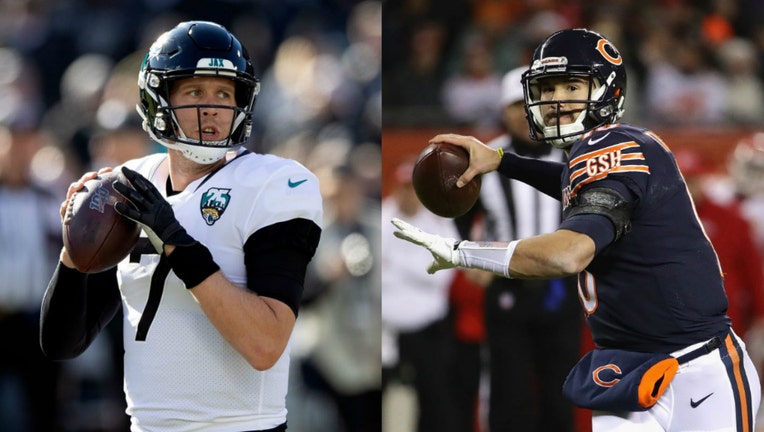 LAKE FOREST, Ill. - With his job up for grabs and his future with the Chicago Bears uncertain, quarterback Mitchell Trubisky is showing an edgier side. He’s being more vocal.

“I think it’s a combination of everything, just realizing this is the last year of my contract,” he said. “Being hurt last year and not playing up to my own expectations, I think going 8-8, having a quarterback competition, and just the desire to want to go out to continue to chase greatness.”

The Bears had big hopes for Trubisky when they traded up a spot with San Francisco to draft him with the No. 2 overall pick in 2017. They’re still waiting for him to deliver, and he’s running out of time.

They made that clear after last season when they vowed to bring in a quarterback to push him and traded for Super Bowl 52 MVP Nick Foles. The Bears also declined their fifth-year option on Trubisky for the 2021 season, meaning he is due to become a free agent at the end of the year.

It all adds up to this being a make-or-break season for Trubisky. And so far, running back and receiver Cordarrelle Patterson likes what he’s seeing.

“He actually looks like a whole new player this year, man,” Patterson said. “I just see it in his eyes. Each and every day, he’s got that fire on him. That’s what we need out of our quarterbacks. That competition. It brings the best out of everybody, so I’m excited. We’ll see what him and Nick can do competing for that job. It’s going to be a good year.”

Trubisky is being more assertive as he tries to hold off Foles and solidify his future with the Bears or another team.

That’s all up in the air after just about everything went wrong last season. The Bears tumbled from winning the NFC North in 2018 to missing the playoffs at 8-8.

Trubisky took a big step back after being picked to replace Jared Goff in the Pro Bowl after the 2018 season. He made too many errant throws and questionable decisions as his yards (3,138), completion rate (63.2%), touchdowns (17) and rating (83) all dropped from the previous year. The fact that Patrick Mahomes and Deshaun Watson — who were drafted later in 2017 — didn’t help.

Foles is also trying to bounce back after losing the starting job to Gardner Minshew in an injury-filled season with Jacksonville. Though he’s familiar with the system and has a history with Nagy in Philadelphia and Kansas City, the COVID-19 pandemic wiped out offseason activities and prevented him from practicing with the Bears.

He’s trying to get on the same page with the receivers, figure out how they run routes and where they want the ball thrown, as well as the coaches.

“There are a lot of similarities with this offense, but there are also a lot of differences,” Foles said. “That’s just sort of how it is. You want to know why the coach is calling the plays, and coaches have different coaching points everywhere I’ve been.

“Sometimes there are similar plays you run but each coach has different points that he makes on a play how he wants it run. So then it’s calibrated in your mind so that when you play, ‘OK, this is what we’re thinking here.’”

The Bears didn’t start practicing in pads until Monday, and the opener at Detroit on Sept. 13 is approaching fast. With no preseason games because of the pandemic, every decision and throw they make in practice is being evaluated.

The two quarterbacks are splitting time for now and alternating days in which they are first in the huddle. It was Trubisky on Monday, Foles on Tuesday.

NOTES: CB Artie Burns tore the anterior cruciate ligament in his left knee in practice, a person familiar with the situation said. The person spoke on the condition of anonymity because the team has not revealed the extent of the injury. Burns, competing with Kevin Toliver and second-round pick Jaylon Johnson for a starting job, was taken from the field on a cart. Drafted out of Miami by the Pittsburgh Steelers with the No. 25 pick in 2016, Burns fell out of the rotation last season and signed with Chicago in March.