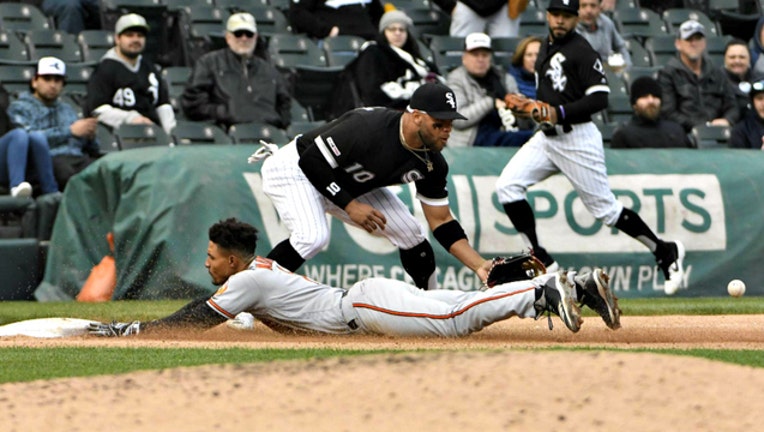 CHICAGO (AP) - CHICAGO (AP) - José Abreu played a big role for the Chicago White Sox on Wednesday even when the Baltimore Orioles pitched around the red-hot slugger.

Yonder Alonso hit a two-run single with two out in the ninth inning, and the White Sox topped the Orioles 7-6 to salvage a split of their doubleheader.

With two down and runners on second and third, Abreu was walked intentionally to get to Alonso, who lined a game-ending single into left field.

"My focus is to hit it somewhere where there's nobody there," said Alonso, who is batting just .183 through 27 games. "It was just a really grinding game, a grinding day.

"This game, it felt like we needed to win."

Abreu had four hits and six RBIs on the day, extending his hitting streak to 10 games. He hit a solo drive in Game 2 and a three-run single in the fourth that gave the White Sox a 5-4 lead.

"What a battle," manager Rick Renteria said "It was nice to get that win after the (first loss)."

Thyago Vieira (1-0) pitched two scoreless innings for the win, and then was returned to Triple-A Charlotte after the game.

Baltimore won the opener 5-4 on Jonathan Villar's tiebreaking sacrifice fly. Branden Kline (1-0) pitched two scoreless innings for the Orioles, and Mychal Givens got four outs for his second save in three chances.

The straight doubleheader was scheduled after Tuesday night's game was postponed by rain.

Baltimore had dropped four in a row before rallying in Game 1.

Richie Martin opened the eighth inning with a triple into the right-field corner off Kelvin Herrera (0-1). Villar then hit a fly ball to center, and Martin scored easily when Engel's throw landed up the third base line.

Givens struck out Abreu with a runner on first to close it out.

"We escaped there," manager Brandon Hyde said. "We just had a couple of innings defensively that we have not had, so that was disappointing, but I was happy with the way we came back and played well for the rest of the game."

Tim Anderson had two hits for Chicago in the second game, but he also committed two errors. Rio Ruiz scored from second on Anderson's wide throw on a possible double play in the seventh, giving Baltimore a 6-5 lead.

"It was a chilly day and a long doubleheader," Wilkerson said. "We did a good job of battling. Obviously we came up short there in the second game."

Chicago right-hander Iván Nova permitted five runs in 5 2/3 innings. He remains in search of his first win in his first season with the White Sox.

Evan Marshall pitched 1 1/3 perfect innings in relief of Carlos Rodón in his White Sox debut in the opener. Marshall was promoted from Triple-A Charlotte before the doubleheader.

Marshall went 4-7 with a 5.15 ERA in 101 games with Arizona, Seattle and Cleveland over parts of the previous five seasons.

Vieira was sent down to make room for Marshall, and then was added to the roster again to serve as the 26th player for the second game.

Orioles: OF Trey Mancini returned in the opener after missing two games with a bruised right index finger. He went 0 for 4 with three strikeouts, and then sat out the nightcap. ... Hyde said RHP Alex Cobb (lower back) continues to undergo therapy in Baltimore.

White Sox: RHP Lucas Giolito (left hamstring strain) will start Thursday in the opener of four-game series against Boston. ... RHP Michael Kopech, who underwent Tommy John surgery last September, was in Chicago for an examination. General manager Rick Hahn said last week the pitching prospect is on track to return at the start of spring training in 2020.