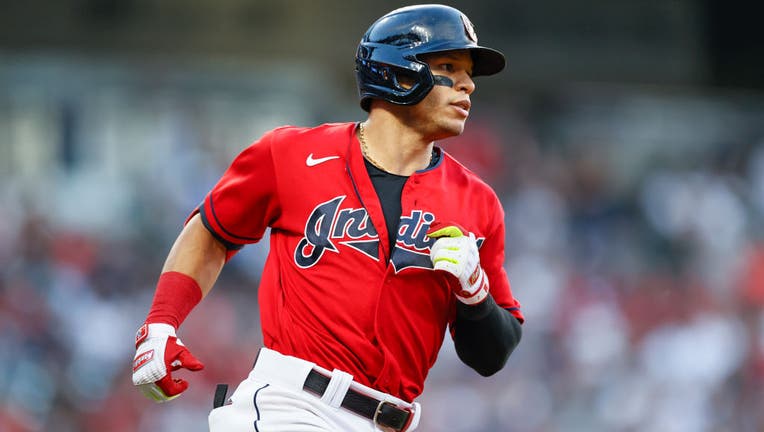 Cesar Hernandez #7 of the Cleveland Indians runs to first base against the Detroit Tigers during the fourth inning at Progressive Field on June 28, 2021 in Cleveland, Ohio. (Photo by Ron Schwane/Getty Images)

Cleveland traded second baseman Cesar Hernandez to the first-place White Sox on Thursday for minor league pitcher Konnor Pilkington — a move that signals the Indians are conceding the division.

"We made the trade that we felt made the most sense for us and this is the direction we went," Indians president of baseball operations Chris Antonetti said. "Just as we tried to be realistic in assessing where we are, we’re going to continue to do our best to win as many games as possible.

"But the reality is the White Sox are a number of games in front of us and we’re intent on improving. If they didn’t acquire Cesar, we were pretty confident they were going to acquire another talented player from another team."

The White Sox, who lead the Indians by 8 1/2 games and open a series with them Friday, have been in the market for a second baseman since starter Nick Madrigal suffered a season-ending hamstring tear on June 10.

The intra-division swap created an oddity. With the Indians playing this weekend in Chicago, the team agreed to transport Hernandez’s gear before they’ll face him for the first time.

"We’ve done a lot of unique trades and had some interesting circumstances around them," Antonetti said. "But I don’t think we’ve had that one before."

In Hernandez, Chicago is getting a Gold Glove defender who can bat leadoff and drive in runs for manager Tony La Russa. The 31-year-old Hernandez is hitting .231 in his second season with the Indians with a career-high 18 home runs and 47 RBIs in 96 games.

"Cesar Hernandez provides our club with a valuable combination of a power bat in the middle infield and Gold-Glove quality defense," Chicago general manager Rick Hahn said. "Adding a player like Cesar gives Tony a strong and proven option at second base for the stretch run of the season and hopefully into October."

Hernandez had been viewed as the player most likely to be dealt before Friday’s deadline because of the Indians’ depth with middle infielders. Antonetti said it’s possible the Indians could make more deals as they begin to look toward 2022.

Andrés Giménez, who was acquired from the Mets in the offseason as part of the Francisco Lindor deal, is ready at Triple-A, and Owen Miller, Tyler Freeman and Gabriel Arias are among the top infield prospects in Cleveland’s organization.

Antonetti said Miller, who was up earlier this season, will join the Indians in Chicago and take Hernandez’s spot. Giménez was in the mix, but he’s currently in the process of applying for permanent U.S. residency and can’t travel outside the country. The Indians will play a series at Toronto next week.

Cleveland is without reigning Cy Young winner Shane Bieber because of a shoulder issue and starter Aaron Civale, who was leading the league in wins earlier this season before hurting his finger against the Cubs.

Antonetti said the trade has no bearing on how the Indians will move forward with their two starters.

"I don’t think our time frames will be too affected by that," he said. "We’ll continue to be guided by what’s in Shane’s and Aaron’s best interests. And if that’s coming back to pitch this season, then great. We’ll welcome them back and hopefully they can help us win games.

"And if their timetables don’t dictate that, then they won’t pitch."

The 23-year-old Pilkington has pitched at Double-A Birmingham, where he went 4-4 with a 3.48 ERA in 14 starts. He did not pitch in 2020 because the minor league season was canceled by the COVID-19 pandemic.

"We think he’s got a chance to start," Antonetti said. "It’s a physical lefty with a four-pitch mix. He’s got a fastball that’s 90-93 (mph). His best secondary pitch at the moment is a changeup, but he also has a slider and a curveball. He’s got multiple weapons to attack hitters.

"Hopefully he can continue the success he’s had in Double-A and can be an option for us moving forward."

Pilkington was drafted in the third round by the White Sox in 2018.