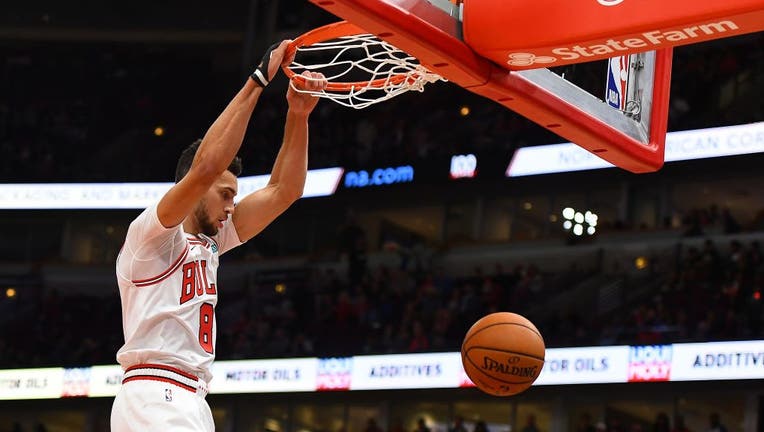 CHICAGO - Lauri Markkanen and Zach LaVine would love to showcase their skills before the home crowd when the All-Star Game returns to Chicago this season for the first time since Michael Jordan stole the spotlight in 1988.

It would mean the Bulls' promising young stars have taken their games to a higher level. And that would likely mean the team is starting to win again.

"Everything comes with winning," said Markkanen, entering his third season. "We haven't been to the playoffs, haven't won at home a lot of games. I know that's one thing that I know (ticks) both of us off. We want to get to that winning record first. Obviously, that comes from us playing well and the whole team playing well."

"If we're in that position where we're winning and we're playing the right way, we can make the playoffs," said LaVine, who averaged a career-high 23.7 points last season. "I don't think we have to validate to anybody. I know how we play on the court. I know, to be realistic, we're the main scouting report on the other team. I draw double-teams, he draws double-teams. I don't think it's as much validation; it's just goals you have for yourself and your team."

The Bulls open the season at Charlotte on Oct. 23.

The Bulls took a head-first dive into rebuilding when they acquired Markkanen and LaVine along with Kris Dunn in the 2017 draft-night deal that sent Jimmy Butler to Minnesota. Though they're a combined 49-115 the past two years, management believes they're ready to rise.

Markkanen, LaVine, Wendell Carter Jr. and Otto Porter Jr. are part of a core that has the front office thinking the team is positioned to make a jump coming off a 22-60 season that ranked among the worst in franchise history. The Bulls changed coaches early on, firing Fred Hoiberg and promoting Jim Boylen, and finished with their lowest win total since 2002 (21-61). A 9-32 mark at the United Center tied New York for the league's worst home record.

The Bulls brought in some competition at point guard after Dunn took a step back by drafting Coby White with the No. 7 overall pick and acquiring Tomas Satoransk from Washington. That was hardly a surprise after Dunn went from averaging 13.4 points to 11.3 in 46 games.

White helped North Carolina reach the Sweet 16 in his lone college season, averaging 16.1 points and 4.1 assists in 35 games. He became the first Tar Heel drafted in the opening round by the Bulls since they took Michael Jordan with the No. 3 pick in 1984. Satoransk set career highs by averaging 8.9 points, 5.0 assists and 3.5 rebounds in 80 games with Washington.

The Bulls got a veteran leader by signing Thaddeus Young to a $41 million, three-year contract. They expect the 31-year-old forward to help install a winning culture and contribute on the court. Entering his 13th season, Young has averaged 13.4 points and 6 rebounds with Philadelphia, Minnesota, Brooklyn and Indiana.

Markkanen was limited to 52 games due to an elbow injury and heart problem, while LaVine played in 63 games last year. Denzel Valentine is back after missing last season because of reconstructive left ankle surgery, and the 6-10 Carter Jr. had his promising rookie campaign end at 44 games due to a left thumb injury.

Boylen came into camp with a contract extension and an opportunity to put his stamp on the team right from the start after the longtime assistant landed his first NBA head coaching job early last year.

He wants the team to play faster and tighten up a defense that ranked among the worst. The Bulls finished near the bottom in rebounding, defensive rating and opponents' field-goal percentage. A healthy Carter down low should help. But Boylen also challenged LaVine and Markkanen to improve on defense. And he wants Markkanen, who averaged 18.7 points and 9 rebounds, to become more consistent on the glass.