Chicago - Arctic air came crashing in Wednesday on gusty winds. The coldest air mass of the season to descend upon us was accompanied by winds gusting between 40 to 50 mph.

The National Weather Service issued a rare "snow squall warning" for portions of Will County in Illinois along with parts of Lake and Porter counties in Indiana. A snow squall is defined as "an intense short-lived burst of heavy snowfall that leads to a quick reduction in visibilities and is often accompanied by gusty winds".

A persistent band of snow developed from about Morris to Monee and continued over the border into Indiana before ending northwest of Valparaiso. It was an anomalous radar return. The longest most intense snow showing up on Romeoville's radar yesterday. 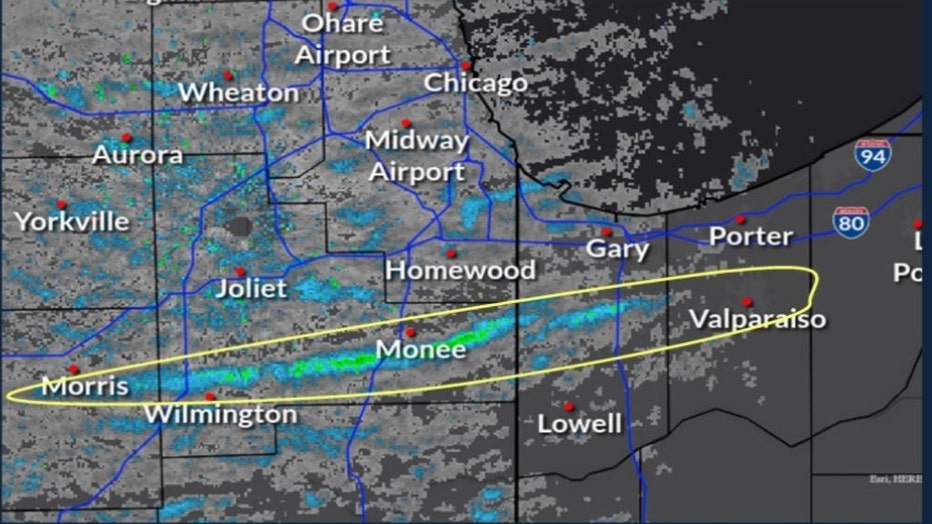 The National Weather Service called it "river-effect snow". The bitter cold air blowing over the relatively warmer water of the Illinois river produced this snow squall that created whiteout conditions. The blowing snow dropped visibilities down to zero. 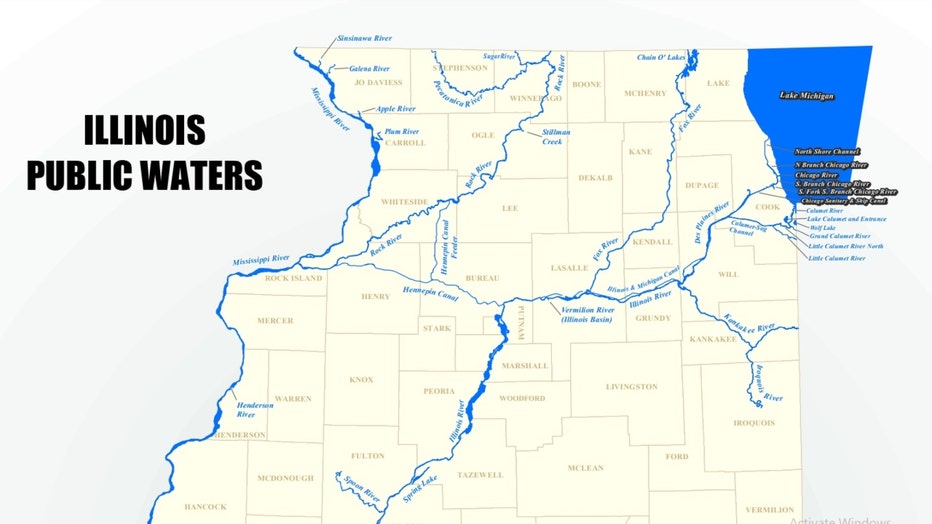 The Illinois river runs nearly due west to east in LaSalle and Grundy counties. That is just upwind from the band of snow that developed. Chicago's National Weather Service office commented on this unusual weather on Twitter:

It's caused by the same processes as lake effect snow with relatively cold air moving over a much warmer body of water for an extended length, except in this case, it's over a river and not a lake. It's fairly rare to see here in our area! 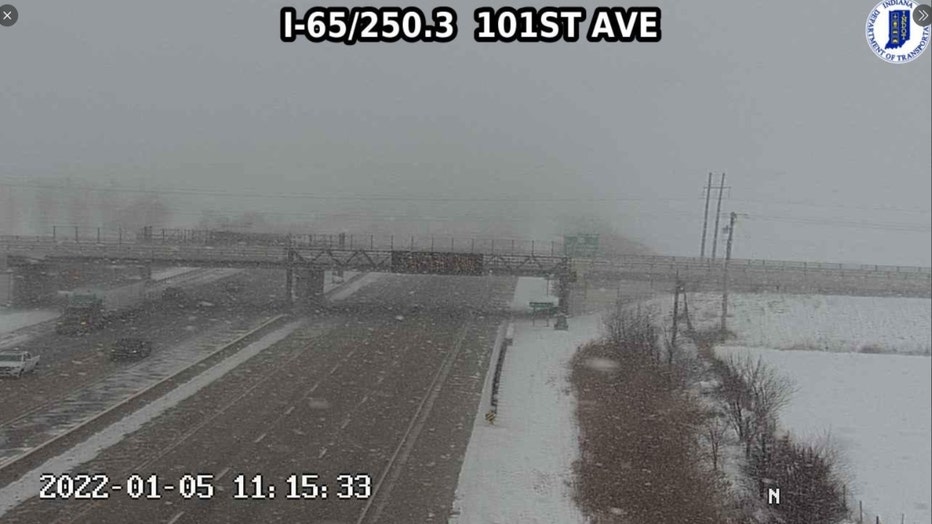 The photo above shows what it looked like during the snow squall warning along I-65 between Merrillville and Crown Point. A traffic camera caught this image that shows the dramatic drop in visibility. 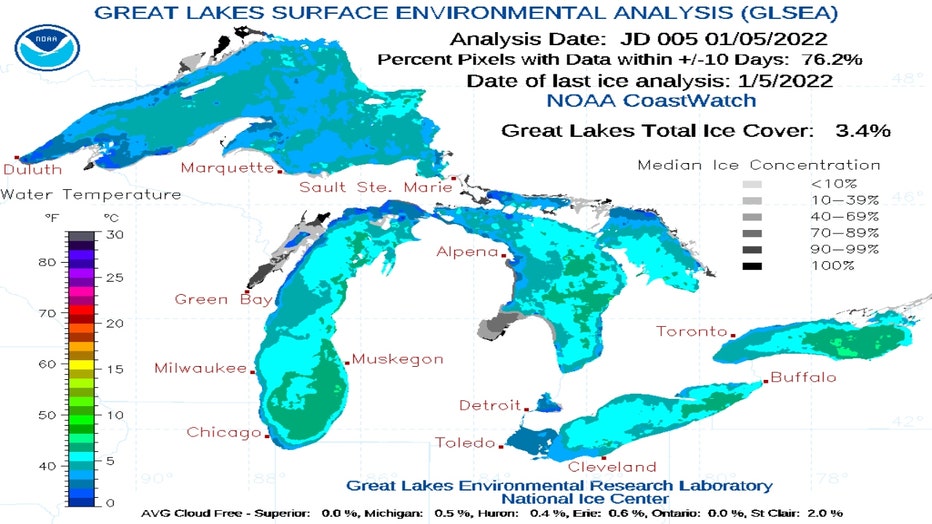 We may not see any more "river-effect" snow this winter but we will undoubtedly see some lake-effect snow. Lake Michigan is still wide open, relatively warm and ready for business. Just 3.4% of the Great Lakes was reporting ice cover as of Wednesday. It may seem like a small number but it is the most ice we have seen at this point since 2018. 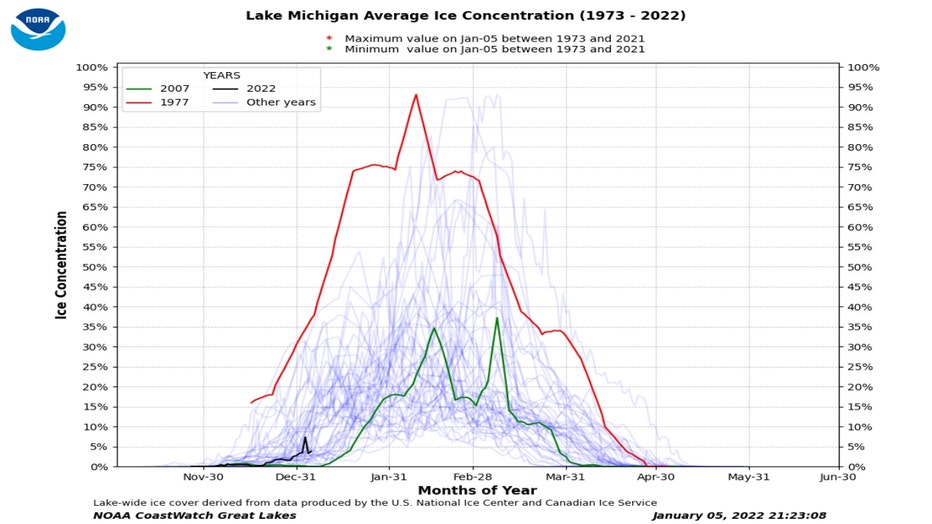 The above graphic compares the ice concentrations for Lake Michigan going back to 1973. The black line represents this year's concentration.  Most previous years by now have had more ice cover than we currently do. That will change with the Arctic air lingering through Friday and another round on the way early next week. 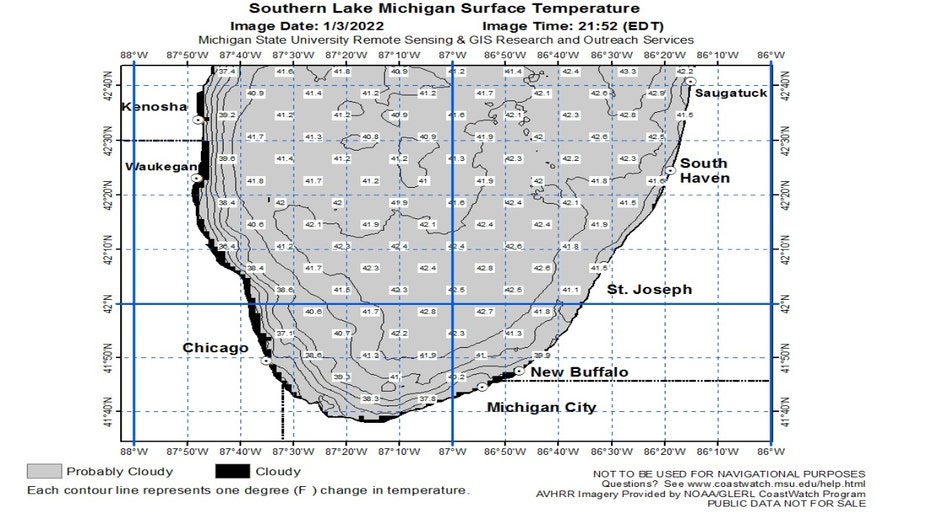 The water in Lake Michigan is fairly warm for this time of the year. Not surprising since we just came out of the 6th warmest December on record. The water temperature ranges from the middle 30s along the shoreline to the lower 40s further out into the lake.

The essential ingredients for lake-effect snow are cold air moving over a relatively warmer body of water. We need to be downwind of the flow of that cold air so a north, northeast wind is most conducive to seeing it here in Chicago but any wind with an easterly component can do provided the air moves over enough water.