CHICAGO - Still wondering where winter is these days? It is about to make a comeback.

We have mostly been spared from some of Chicago's worst winter elements to this point. The first three weeks of January ranked as the third warmest start to January on record. Temperatures for this month are running nearly 11 degrees above average. We've been saving a lot on salt as our snowfall deficit continues to lag well behind average. We have seen just 6.2 inches of snowfall so far compared to an average to date of 17.3 inches. That means we have seen just about a third of average snowfall thus far this winter of 2022-2023.

Chicago weather: Snow in the forecast

I recently posted about our "wimpy winter" getting even wimpier. The "Accumulated Winter Season Severity Index" or AWSSI (or "misery index") calculated by the Midwest Regional Climate Center still has our winter in the "mild" category. That is the least miserable of all the possible categories we could find our winter in. The categories in order from least miserable to most include mild, moderate, average, severe and extreme. 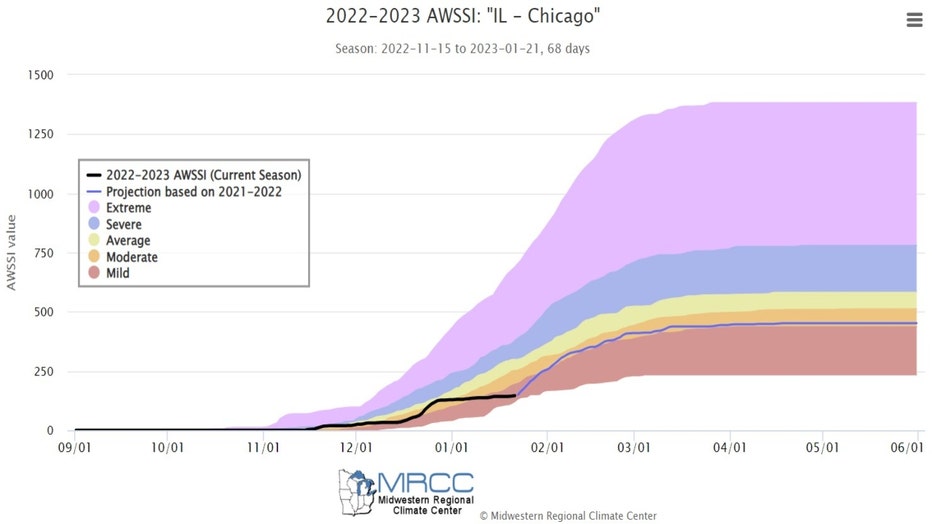 The black line on our winter index chart shows us how we got to this point and the blue line is a forecast for where we end up. The latest projection has us moving to just the next most miserable level, or from "mild" to "moderate". This will be subject to change for sure.

Our next round of sticking snow should begin Tuesday night and continue into at least early Wednesday. Models are steering the worst snow just to the south of the city, but we will probably have to break out our shovels. 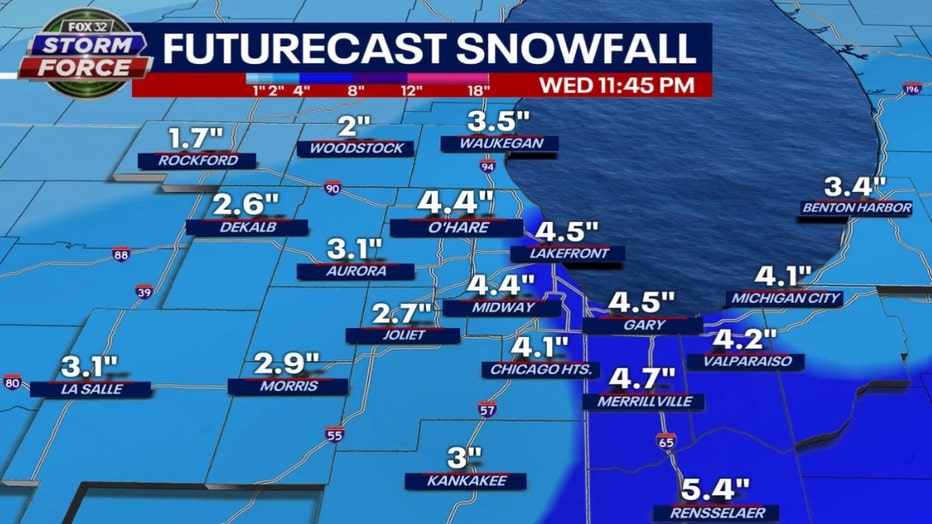 I have come to the point of my post where I have to issue a disclaimer. Forecasting snowfall amounts depends on a variety of factors so these numbers could change dramatically between now and Wednesday.

That being said, the GFS model squeezes out about 2 to 5 inches of new snow for the middle of the week. 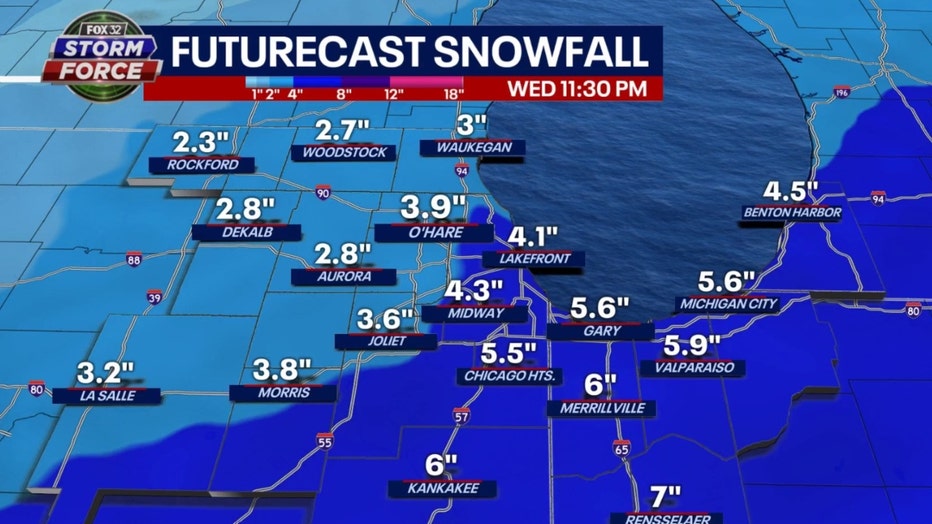 Our Fox model has similar snowfall amounts. The range with this model is between 2 to 6 inches. The one thing consistent between both models is they keep the swath of heavier snow south of the city.

More chances for sticking snow are coming. Some snow showers on Thursday and Friday could lay down a bit more snow but the next significant snowfall might be coming Saturday night into Sunday. The GFS model squeezes out a total of 6 to 10 inches of snow between Tuesday night through Sunday night when they are all added up. Stay tuned!

Our model is also hinting at the coldest temperatures since just before Christmas arriving next week. 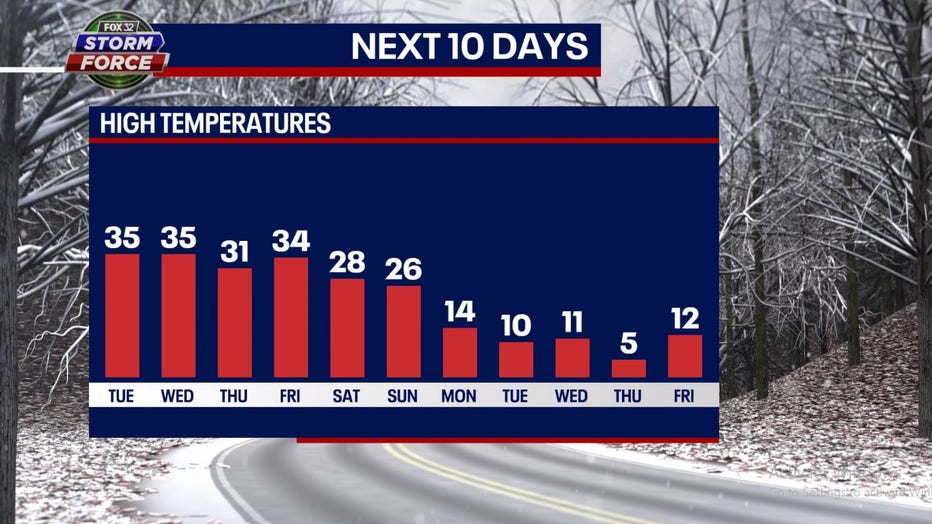 Monday should end up barely above average. That means it is the 28th straight day with above average temperatures. We will probably slip back to below average this weekend as temperatures tumble into the middle to upper 20s for highs. Our model suggest highs will fall into just the single digits a week from Thursday.

The Climate Prediction Center seems to back up this shift towards a colder pattern for the end of this month and the start to February. 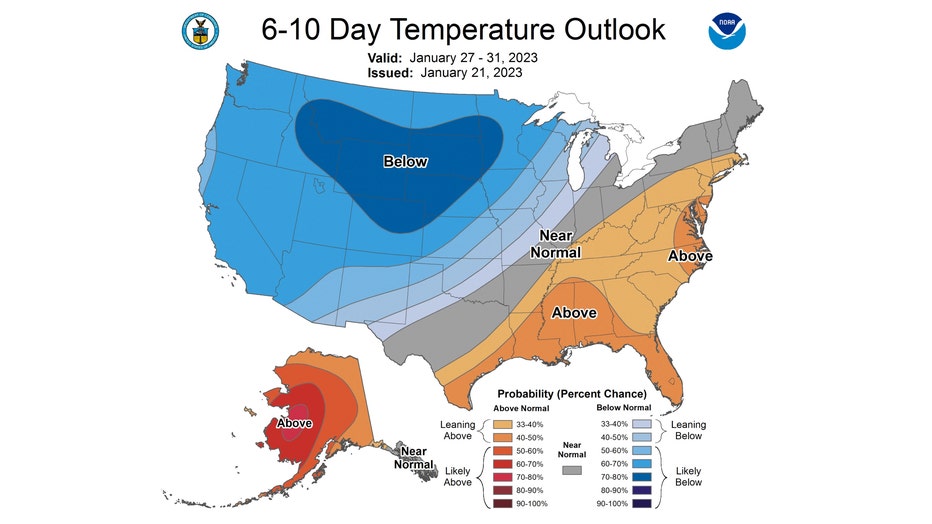 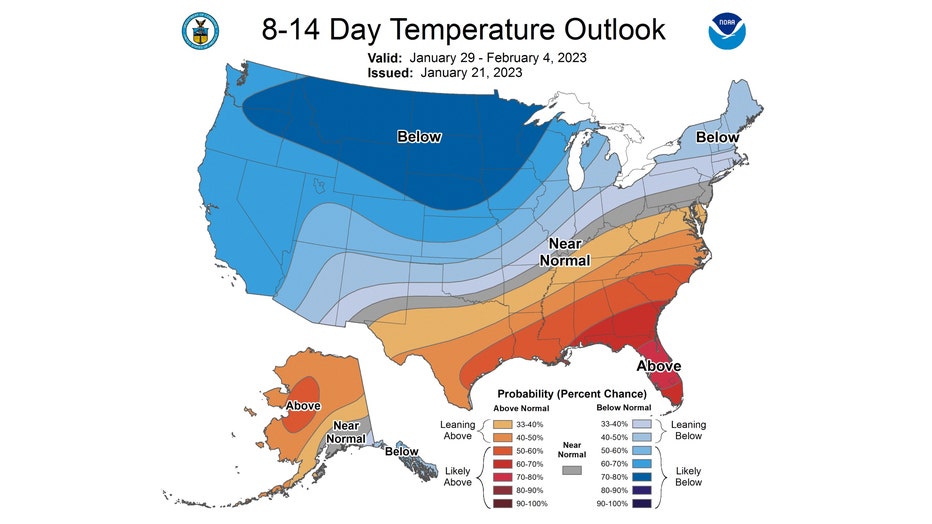 This even longer range outlook has us also "leaning below" average overall. This covers the period from Sunday through the following Saturday.

I think for most of us the phrase "all good things must come to an end" applies here.