CHICAGO - For those of you who don't like typical Chicago winter weather, you really can't complain. We are riding a remarkable streak of consecutive days with temperatures above average that stretches to 21 straight days Tuesday. It is no exaggeration to say it feels more like March than January so far this month. The start of 2023 is now running an incredible nearly 11 degrees above average.

Snowfall has been scant too. We have picked up just 4.7" of snow since the start of November last year. On average, we should have nearly 15" by now. In other words, we have seen less than a third of normal snowfall this winter thus far.

I posted a little over a week ago about our "wimpy winter" to that point. At that time the "Accumulated Winter Season Severity Index" or AWSSI (or "misery index") calculated by the Midwest Regional Climate Center had our winter in the "moderate" category. The categories in order from least miserable to most include mild, moderate, average, severe and extreme. We have now moved into the "mild" category, the least miserable of all the categories. 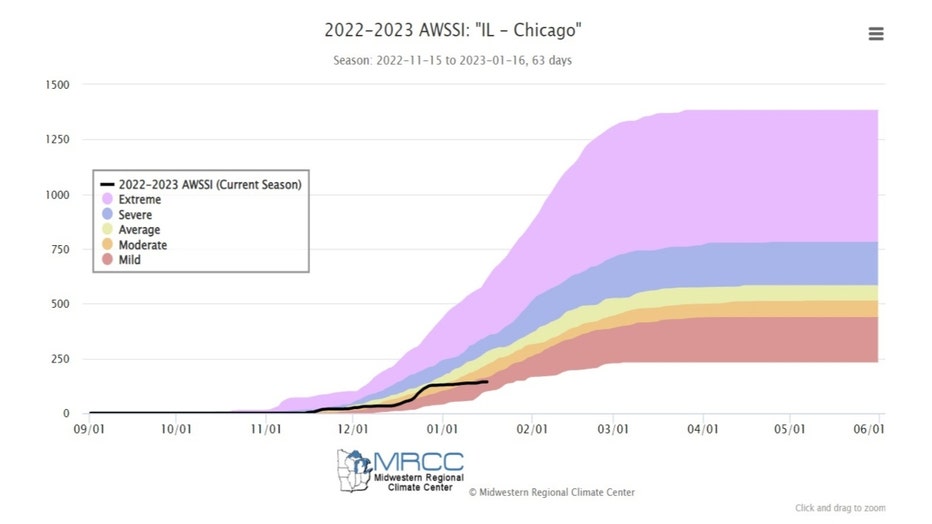 It now appears a pattern change could be coming that will bring back more typical winter weather. Let's start with snowfall. 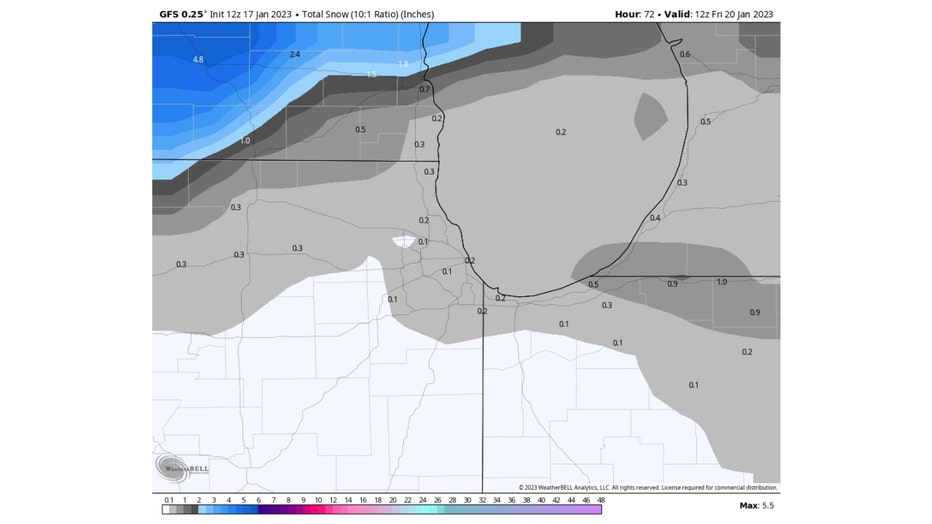 We have two main chances for some sticking snow over the next week or so. I will share some forecast model output but keep in mind these numbers will undoubtedly change and are not written in stone. Still, they support the notion that our odds of seeing some decent snow are increasing.

Our first chance comes later Wednesday into Thursday. The GFS model on squeezes out about a trace to a half inch of snow here. It appears the main swatch of sticking snow will miss us to the northwest. 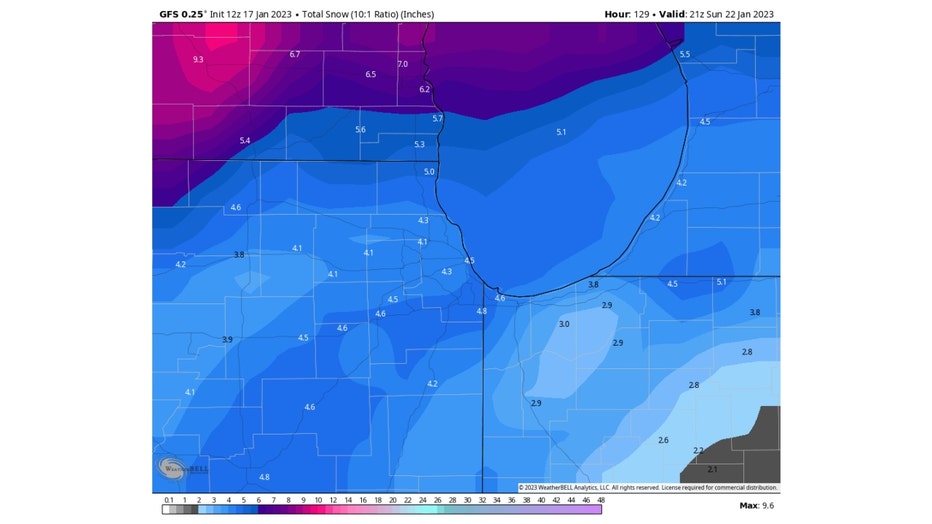 I extended the total snowfall accumulation forecast from the GFS model through early Sunday afternoon. It adds another four or five inches of snowfall to the forecast. The model is suggesting our snowfall potential is better with this second season. Still A LONG WAY OUT so stay tuned! 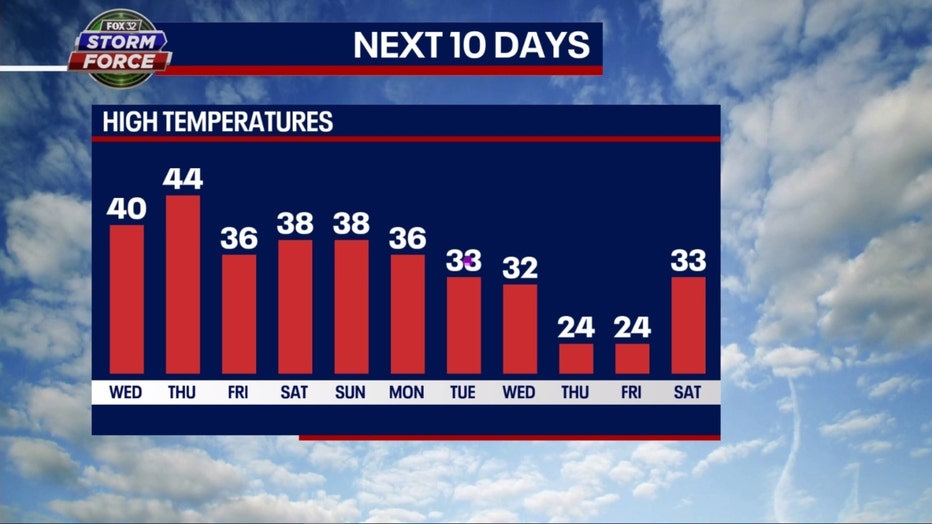 Our temperatures should fall Friday back closer to average and then slowly fall further early next week before dropping back below average by nearly 10 degrees towards the end of next week. This is a forecast from Fox 32's weather model.

The long-term forecasts from the Climate Prediction Center show a shift in our pattern too. The blob of blue that represents a forecast of colder than average temperatures, is expanding and moving towards us. 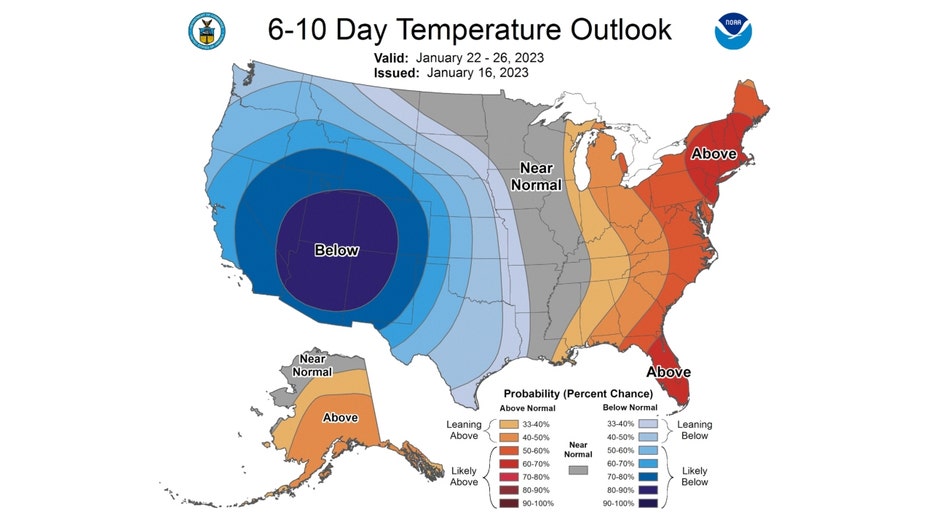 The 6-10 day temperature outlook has us forecast to be barely "leaning above" average overall from Sunday through the following Thursday. The average highs for this time of the year are around 31 degrees. 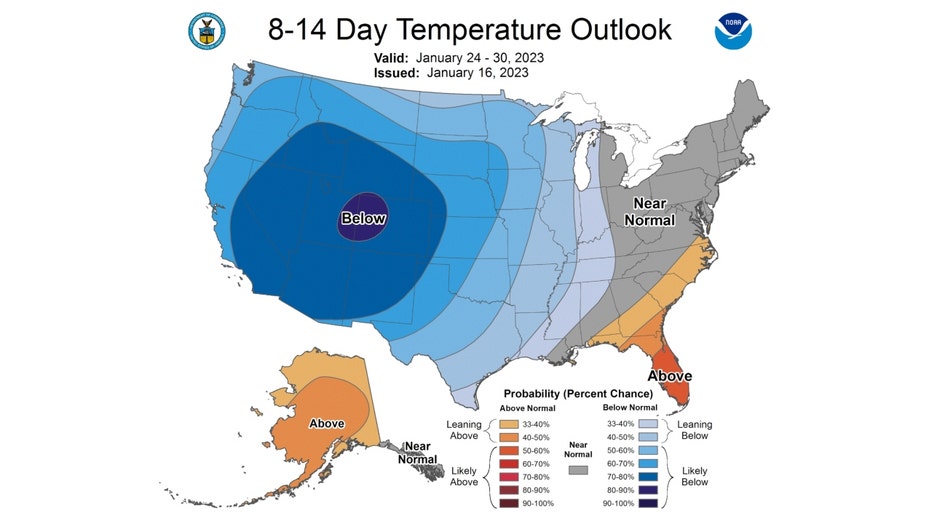 The 8-14 day temperature outlook has us feeling the blues. We are forecast to be "leaning below" average from next Tuesday through the following Monday. 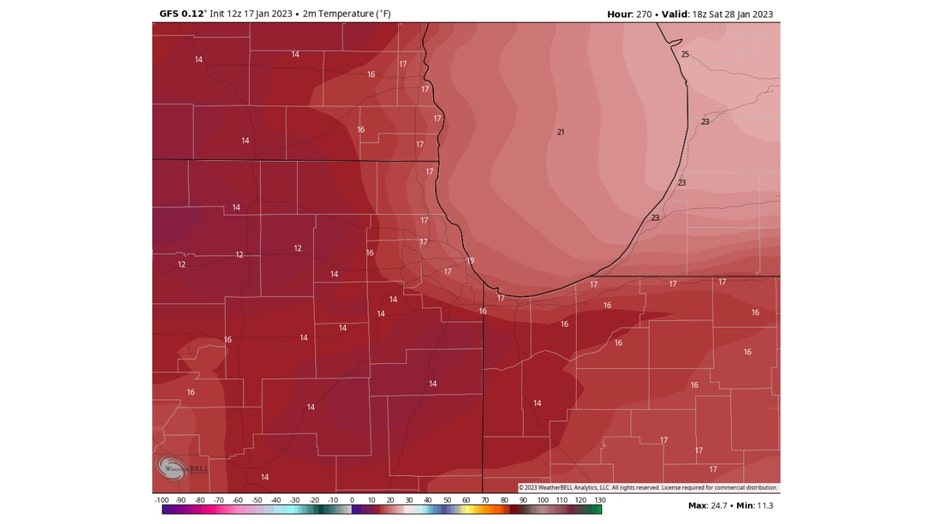 GFS Model Forecast Temperatures for the Afternoon of January 28th

There has been a lot of chatter on Twitter about a "sudden stratospheric warming" that could disrupt the Polar Vortex and send at least a chunk of it south towards us around the end of the month. The GFS model seems to corroborate this idea. I need to caution again that this is still several days away and will need to be watched, but the model suggests highs only hitting the middle teens on January 28th.

Is it too early for me to be done with winter?