Chicago - I don't believe in "jinxes" but I still get a bit nervous when I start to hear people say things like "this winter isn't so bad". We have passed the half-way point of winter! Last Friday, January 14th, was the 45th day of winter. We now have 43 days left to the season (including today). So far, so good unless you like your winters colder with a ton of snow. The Accumulated Winter Season Severity Index or winter "misery index" has us in the "mild" category at this point. That is the least severe category possible. We are on the cusp of the "moderate" category. The categories continue to get worse from there including "average", "severe" and finally "extreme". The index is based on "the intensity and persistence of cold weather, the amount of snow, and the amount and persistence of snow on the ground".  December saw just 1.9" of snow compared to an average of 7.6" for the month. Just 4 of 31 days in December were below average. The month ended up a whopping 7.6° above average. January has been a bit more harsh but nothing extreme. 8 of the first 16 days of the month have seen at least a trace of snow but when it is all added up, we come in a bit below average. 4.7" of snow has fallen this month which is just .6" below average to date. 11 of the first 16 days have featured below average temperatures with the month now running nearly 4° below average. 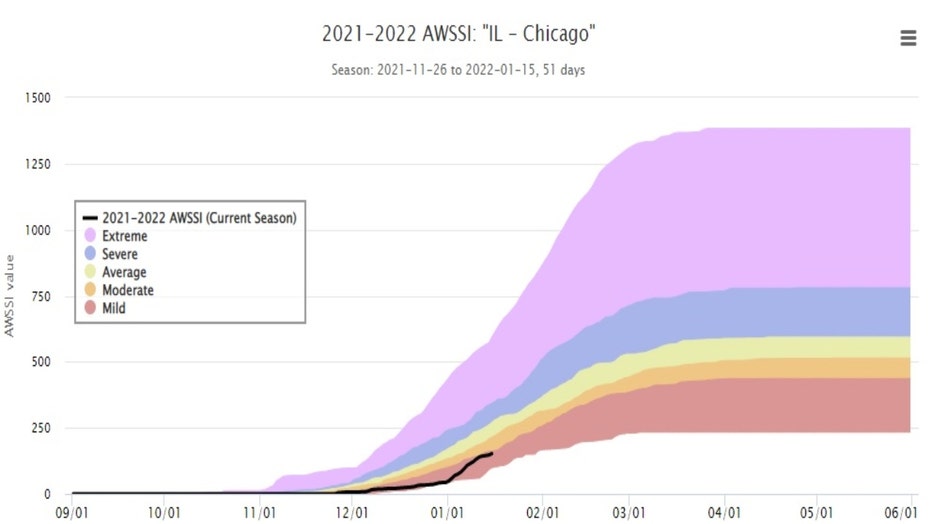 Looking longer range the start of the second half of winter looks to be a bit colder than average with probably less snowfall compared to average. The National Blend of Models daily high and low forecast goes out eleven days into the future. It suggests the second half of January will be colder than average overall. Just one day of the next eleven is forecast to be above average. Tuesday's high is expected to reach nearly 40° or 8° above the average for that date. The coldest day of then next eleven should be Thursday with highs only in the middle teens. 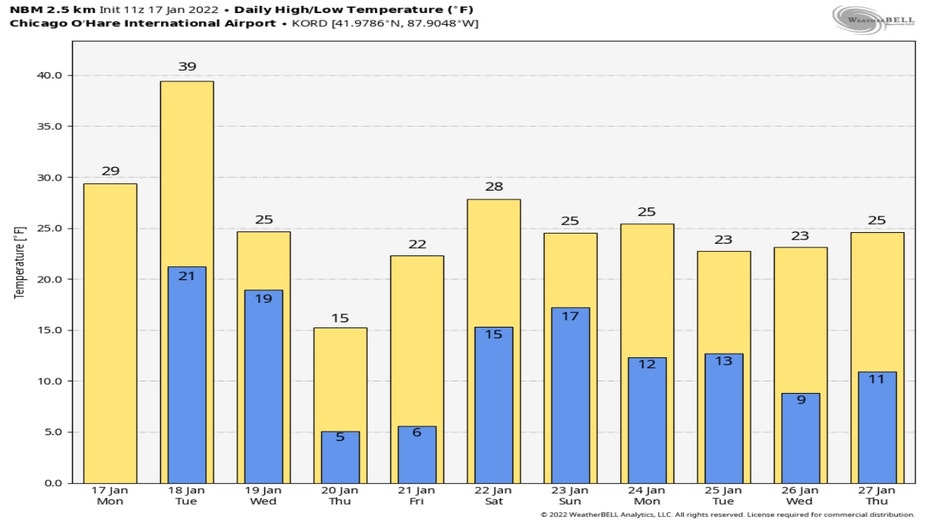 The 6-10 day temperature outlook favors us to be "likely below" average overall with the southeast having the highest probability of colder than average temperatures. This covers the period from Saturday through next Wednesday. 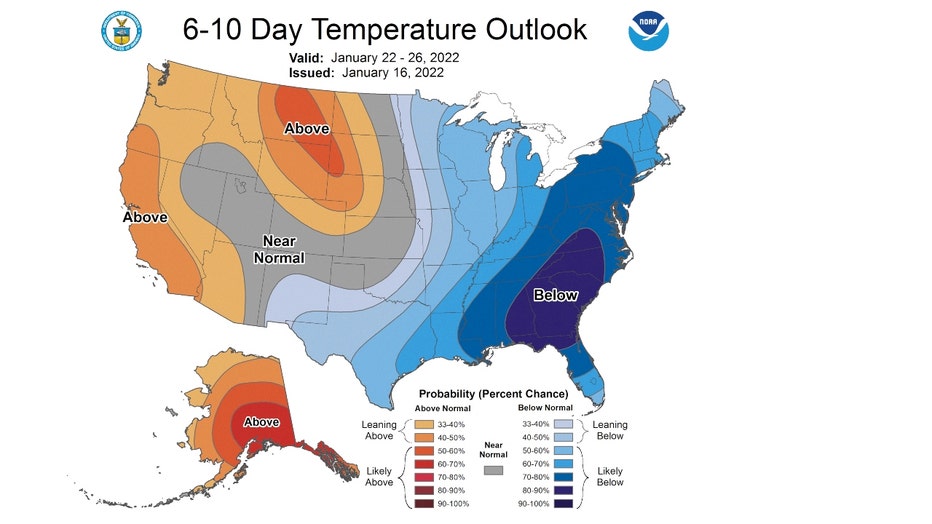 The 8-14 day outlook has "leaning below" average overall. This period covers most of next week. 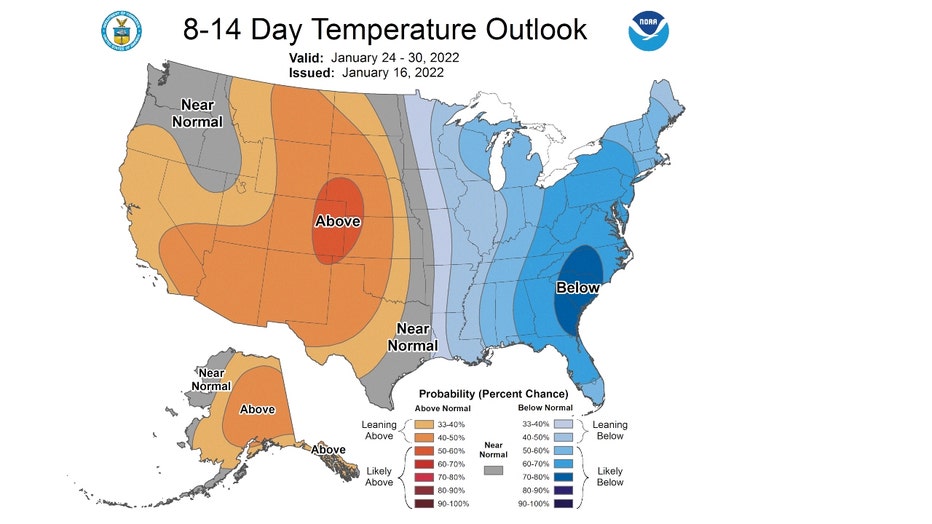 The Global Ensemble Forecast System looks even longer range. Its forecast extends all the way into the middle of February. It forecasts the Chicago area to be around -5° to -7° below average overall from now through Valentine's Day. 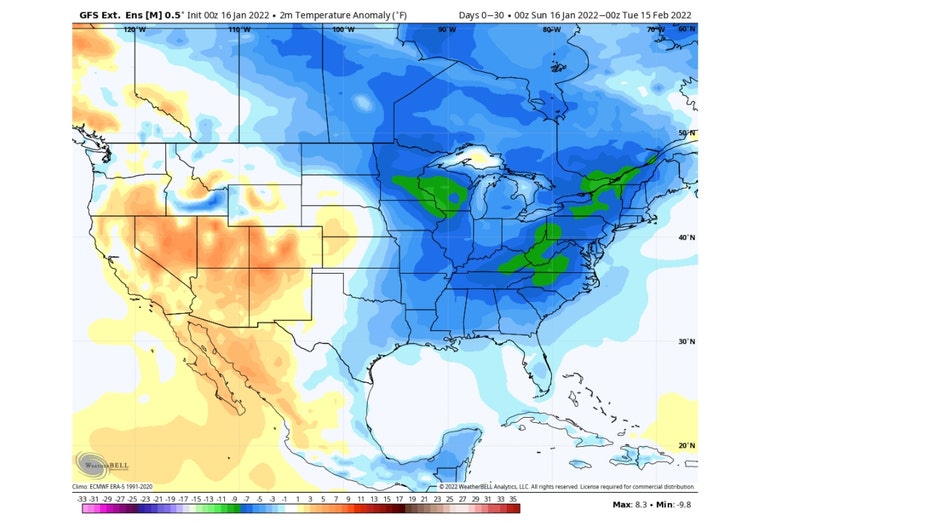 The long range outlooks for snowfall hint at a lack of the white stuff (compared to average) through the end of January. The 6-10 day precipitation outlook has a sliver of our area north of the city "leaning above" average but most of us are expected to be near normal overall from Saturday through the following Wednesday. 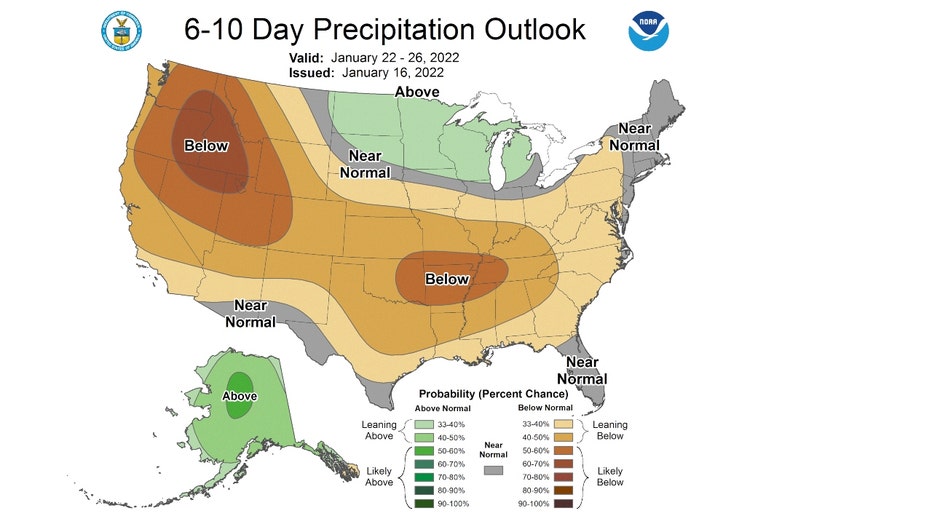 The longer range 8-14 day precipitation outlook has us "leaning below" average for precipitation for the period that covers most of next week. 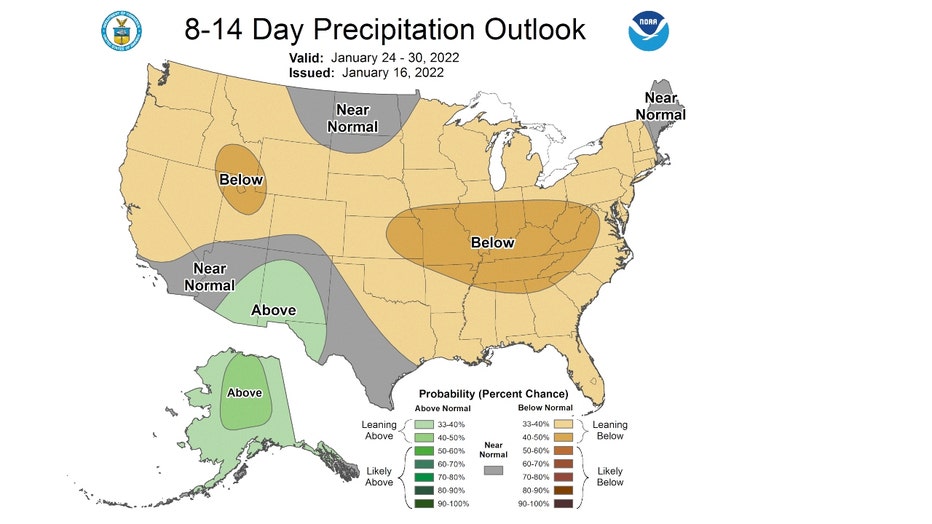 I will be watching the forecast for the second half of winter with interest. My winter forecast that I issued back at the start of December called for a warmer than average winter with more snowfall than average. The temperature portion of my forecast is working out. Even though January is colder than average, December was well above average so winter so far is running above average overall. The snowfall portion of my forecast isn't panning out yet. We have seen 6.6" of snow since December 1st which is 6.3" below average. We still have plenty of winter left so don't put away those snow shovels yet.