Up to 4 inches of snow will hit the Chicago area Friday evening before temperatures plummet to below-zero wind chills over the weekend, forecasters say.

CHICAGO - Flights at O’Hare International Airport were held up Friday as a winter storm moved through the Chicago area.

The FAA issued the ground stop at O’Hare, but Midway International Airport is not affected at this time, Aviation Department spokeswoman Karen Pride said.

According to the FAA, when a ground stop is issued, “flights that are destined to the affected airport are held at their departure point for the duration of the Ground Stop.”

Both airports reported hundreds of cancellations as snow fell across the area.

Up to 4 inches of snow will hit the Chicago area Friday evening before temperatures plummet to below-zero wind chills over the weekend, forecasters say.

Mark Strehl has your weather update!

“It will go from no snow to snowing pretty heavily,” Petr said. “Take it slow and give yourself enough time for where you need to go.” 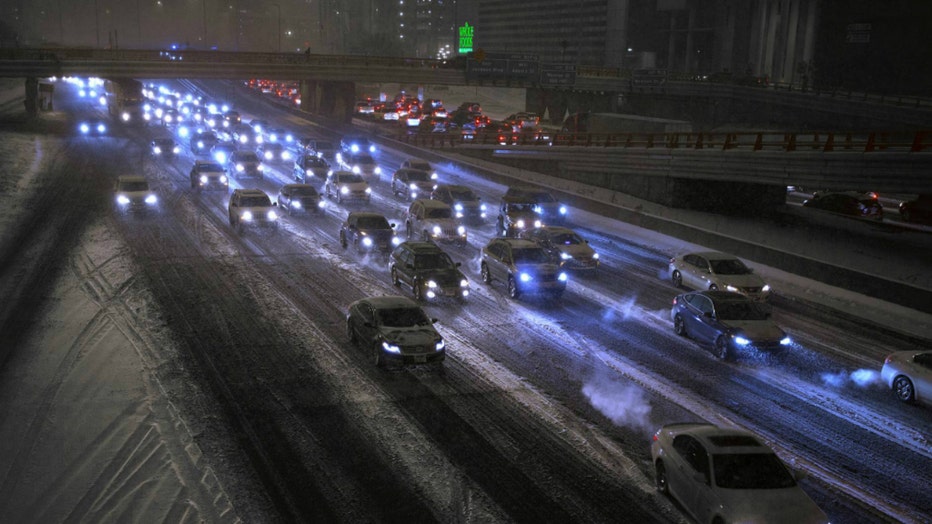 Traffic on I-90/94 in downtown Chicago grinds nearly to a halt as snow falls on Friday, Jan. 17, 2020. (Terrence Antonio James/Chicago Tribune/Tribune News Service via Getty Images)

About 9 or 10 p.m. Friday, snow will change to sleet or freezing rain as warmer air pushes through, he said. Saturday morning will see mostly rain showers.

But, later Saturday morning, the precipitation will change back to patchy snow showers as a cold front moves in, Petr said.

Wind gusts of 45 mph are expected in the morning and afternoon, he said. Temperatures will reach the upper 30s.

Cook County government is reminding residents that warming centers are available during the daytime for those without adequate heating in their homes.