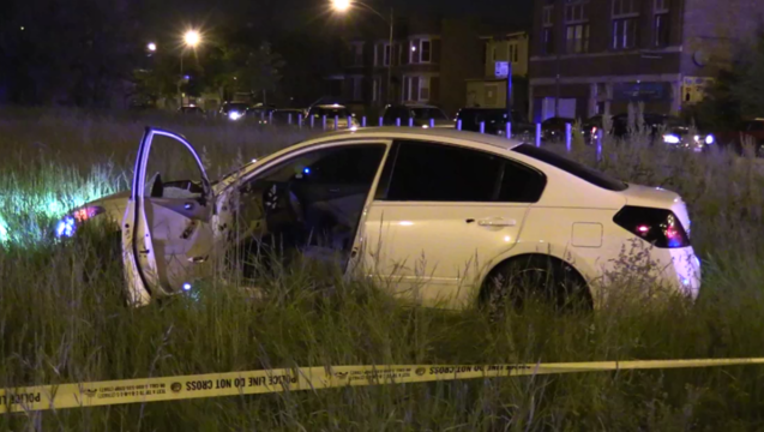 A 24-year-old woman was shot while sitting in a vehicle stopped at a red light in the 7100 block of South Wentworth late Monday. | Network Video Productions

Most recently, three men were injured in a South Shore neighborhood shooting.

The men, ages 21, 25 and 32, were sitting in a vehicle at 11:33 p.m. in the 1700 block of East 69th Street when someone walked up and opened fire, according to Chicago Police. The youngest man was shot in the leg, while the 25-year-old was shot in the arm. They were both taken in good condition to Northwestern Memorial Hospital. The oldest man suffered a graze wound to the neck and refused medical attention.

Twenty minutes earlier, a 24-year-old woman was shot and seriously wounded while driving in the Englewood neighborhood on the South Side. She was in a vehicle stopped at a stop light at 11:13 p.m. in the 7100 block of South Wentworth when shots rang out, police said. The woman, who was the only person in the vehicle, suffered gunshot wounds to the head and hand and was taken in serious condition to Advocate Christ Medical Center in Oak Lawn.

At 10:09 p.m., another South Shore neighborhood shooting left a 24-year-old man wounded on the South Side. He was standing outside in the 7000 block of South East End when he heard gunfire and realized he’d been shot, police said. The man suffered gunshot wounds to the hand and leg and later showed up at Little Company of Mary Hospital and Health Care Center in Evergreen Park, where his condition was stabilized.

Earlier Monday, a 16-year-old boy was shot in the East Side neighborhood. He was walking about 4:25 p.m. in the 9700 block of South Avenue L when a vehicle pulled up and someone inside shot him in the hip and buttocks, police said. The boy was taken to Advocate Trinity Hospital in serious condition.

About 15 minutes earlier, a 22-year-old man was shot in the Lawndale neighborhood on the West Side. He was walking about 4:10 p.m. in the 3900 block of West Lexington when he heard gunfire and realized he’d been shot in the leg, police said. He was taken to Mount Sinai Hospital, where his condition was stabilized.

More than 14 hours earlier Monday, a 50-year-old woman was shot in the Rogers Park neighborhood on the North Side. She told investigators she was walking in the 6400 block of North Magnolia about 2 a.m. when she heard gunfire and was shot in the left leg, police said. More than two hours later, the woman walked into Advocate Illinois Masonic Medical Center, where her condition was stabilized.

About 2:35 a.m., a 35-year-old man was standing on a front porch in the South Shore’s 7800 block of South Kingston, when someone in a vehicle nearby fired shots in his direction, police said. The man was shot in the left leg and was taken to Northwestern Memorial Hospital, where his condition was stabilized.

Monday’s first shooting happened about 1:30 a.m. in the Heart of Chicago neighborhood on the Lower West Side. A 20-year-old man and 30-year-old woman were standing outside in the 2300 block of South Leavitt when a red minivan drove by and someone inside fired shots, police said. The woman suffered a gunshot wound to the left leg and the man was shot in the left foot. Both were taken to Stroger Hospital, where their conditions were stabilized.