CHICAGO - Thirteen people were wounded in shootings across Chicago Thursday, including a teenager and an 8-year-old boy.

The child and a 27-year-old woman were shot in Altgeld Gardens on the Far South Side, Chicago police said. They were outside about 8:40 p.m. when someone walked up and shot at a nearby male in the 700 block of East 132nd Street.

One bullet went through the boy’s back, while another grazed him on the arm, police said. He was taken to Comer Children’s Hospital in good condition. The woman was taken to the University of Chicago Medical Center in fair condition with gunshot wounds to her abdomen and leg.

Boy, 8, among 2 shot on Chicago’s Far South Side

An 8-year-old boy and a 27-year-old woman were struck by stray bullets Thursday in Altgeld Gardens on the Far South Side.

In the early morning, a 17-year-old boy was shot in Roseland on the Far South Side.

About 2:30 a.m., he was standing on the sidewalk in the 200 block of West 115th Street when he heard shots and felt a pain, police said. He was struck in the left leg and taken to Christ Medical Center in Oak Lawn in good condition.

On Thursday afternoon, a man was grazed by gunfire in Fernwood on the South Side.

Two males approached the 34-year-old about 5:50 p.m. at a gas station in the 200 block of West 103rd Street, police said. Someone pulled out a gun and opened fire, grazing the man in the abdomen and thigh. He was taken to the University of Chicago Medical Center in good condition.

Just over an hour before that, a man was shot in Morgan Park on the Far South Side.

He was in a vehicle about 4:42 p.m. in the 1000 block of West 115th Street when he heard shots and felt pain, police said. The 35-year-old was taken to Christ Medical Center in Oak Lawn in serious condition with gunshot wounds to his arm and back. 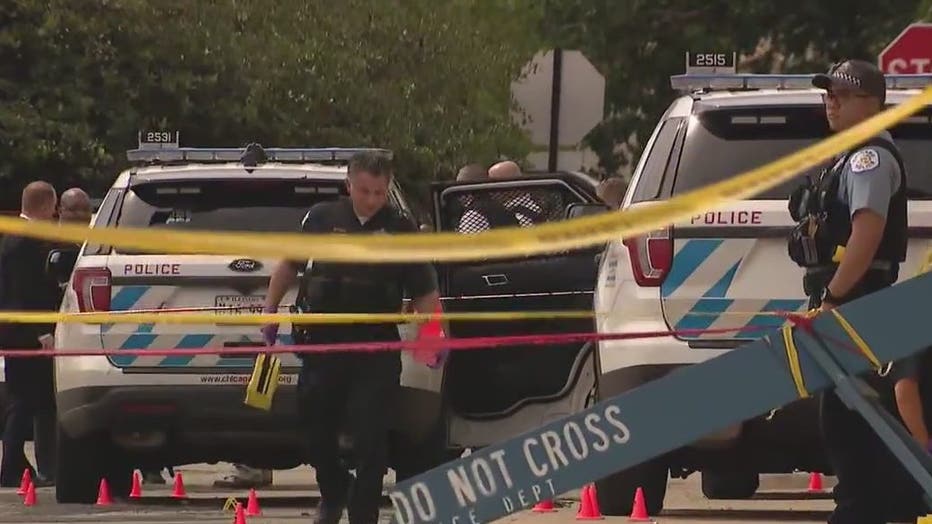 About 40 minutes earlier, another man was wounded in Grand Crossing on the South Side.

The 32-year-old was shot in the arm about 4 p.m. in the 7100 block of South Stony Island Avenue, according to police. He was taken to the University of Chicago Medical Center in good condition.

Earlier that morning, two men were shot in a drive-by in South Chicago.

Several hours before that, a gunshot victim was dropped off at a hospital in Lake View on the North Side.

About 2:40 a.m., the male was dropped off at Illinois Masonic Hospital with a gunshot wound to the chest, police said. He was listed in serious condition.

Minutes earlier, a 27-year-old man was wounded in a drive-by in West Pullman on the Far South Side.

About 2:35 a.m., he was standing in the 11900 block of South Eggleston Avenue when someone inside a passing white-colored sedan fired shots at him, police said. He was struck in the left leg and the left arm and taken to Christ Medical Center in Oak Lawn in fair condition.

Another man was shot during a robbery about an hour and a half before that in West Town.

The robber approached the 22-year-old about 1 a.m. as he walked in the 600 block of North Ada Street and announced a robbery, police said. The man struggled with the robber, who shot him in the hand before fleeing with the man’s backpack. He was taken to Stroger Hospital in fair condition.

She was outside with a group about 12:15 a.m. in the 7300 block of South Winchester Avenue when someone in a black sedan opened fire, striking her in the arm, police said. The woman was taken to Holy Cross Hospital in fair condition.

A carjacking suspect being led into a Chicago police station on Thursday shot three officers who then returned fire and shot him, authorities said.

Three Chicago police officers were also wounded in an exchange of gunfire Thursday morning at the 25th District police station on the Northwest Side.

Sources told the Sun-Times a carjacking suspect in a transport wagon shot the officers. In turn, he was shot multiple times.

One officer was in serious condition after being shot in the chin. He was taken to Illinois Masonic Medical Center, CPD Supt. David Brown told reporters outside that hospital.

Two officers suffered less serious wounds. One was shot in his protective vest, but the bullet didn’t penetrate; the other officer was wounded in the hip. They were taken to Loyola University Medical Center in Maywood, Brown said. Two other officers were taken to that hospital for chest pains, Brown added.

The prisoner’s condition was unknown; he was taken to Stroger Hospital. The shooting happened about 9:40 a.m., Brown said.

Wednesday’s shootings killed one person and wounded 10 others in Chicago.