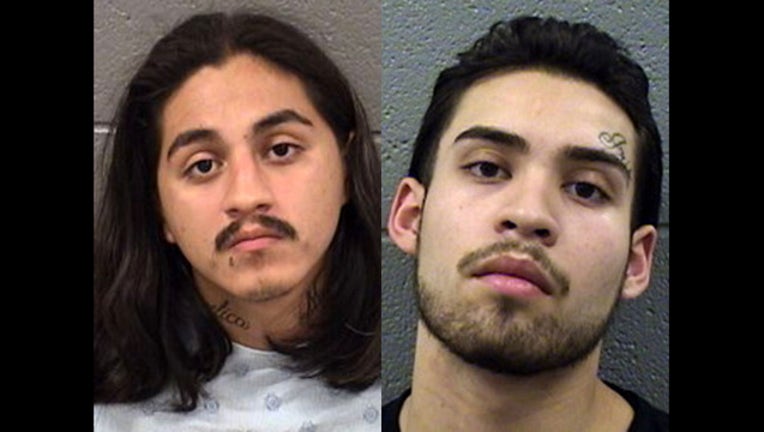 SUN-TIMES MEDIA WIRE - Two reputed gang members have been charged with attempted murder for allegedly shooting at a man and an undercover Chicago Police sergeant in the midst of an undercover sting operation on the Southwest Side this week, the Chicago Sun-Times reports.

Neither the officer nor the other man were injured about 9:30 a.m. Monday in the 6100 block of South Kolmar.

The undercover deal was part of an ongoing investigation of gun sales by Chicago Police and the FBI.

The man who was first targeted had just given 21-year-old Jose Guzman $1,500 in exchange for the three weapons they had discussed days before, Assistant Cook County State’s Attorney Lorraine Scaduto during two of the suspects’ bond hearings Wednesday.

Guzman had just left the man’s car to retrieve the guns, when Jose Gurumendi emerged from a nearby gangway and fired at the civilian three times, Scaduto said.

Officers conducting the surveillance then saw Guzman and Gurumendi flee and jump into the back of a waiting car. So they tried to box in the car at 61st Street, Scaduto said.

One officer even drew his gun, but the car drove around him and the others and sped away, Scaduto said.

The sergeant continued to pursue Guzman and Gurumendi in his undercover vehicle, Scaduto said.

In the 6300 block of South Keeler, Guzman allegedly pointed his gun out of the car and fired two shots toward the sergeant.

Guzman, who was wearing an orange construction vest, and Gurumendi jumped out of the car as it went south on Kenneth, Scaduto said.

Guzman was found hiding near a pool shortly after, Scaduto said.

Gurumendi, 21, was also arrested after he offered a witness $10 to not call police, Scaduto said.

A .380-caliber gun and a revolver were recovered Tuesday on one of the streets used in the chase, Scaduto said.

At least two other suspects were involved, authorities said.