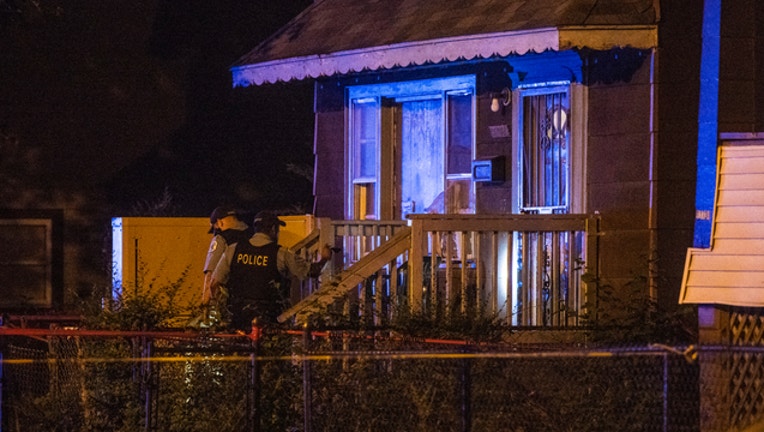 Police investigate the scene where two girls, 11 and 17, were shot Sunday night in the 11700 block of South Perry Street. | Tyler LaRiviere/Sun-Times

CHICAGO (SUN TIMES MEDIA WIRE) - Two people were killed and eight others were wounded Sunday in shootings across Chicago over 24 hours, including a man fatally shot in crossfire in Rogers Park on the North Side.

The 25-year-old was walking about 8:25 p.m. in the 7600 block of North Clark when he was caught in crossfire between two people, according to Chicago police.

He was struck in his abdomen and was taken to Saint Francis Hospital in Evanston, where was pronounced dead, police said. The Cook County medical examiner’s office did not immediately released details about the death.

Before dawn, a man was fatally shot in the West Pullman neighborhood on the Far South Side.

About 4:15 a.m., officers responded to the 900 block of West 129th Place and found 41-year-old Norris Anderson with a gunshot wound to his chest, according to police and the medical examiner’s office.

He was taken to Christ Medical Center in Oak Lawn, where he died, authorities said.

Responding officers saw a male suspect walk away from the scene of the shooting and get into a blue minivan, police said. They followed the suspect but lost sight of him when he exited the minivan and ran away.

In nonfatal shootings, an 11-year-old girl and a 17-year-old girl were shot in the West Pullman neighborhood on the Far South Side.

The girls were standing outside about 10:25 p.m. when a white vehicle drove by and someone fired shots in the 11700 block of South Perry, police said. The 11-year-old was shot in the chest and was taken to Stroger Hospital in serious condition.

The older girl was shot in the right hand and elbow and was taken to Roseland Community Hospital, according to police. She was transferred to Stroger Hospital, where her condition stabilized.

A woman at the scene of the shooting could be heard screaming “my baby got shot.”

Five minutes earlier, a 17-year-old boy was wounded in a Fuller Park drive-by attack on the South Side. The boy was standing outside about 10:20 p.m. when someone in a passing black car pulled out a gun and opened fire, according to police.

He was struck in the chest and was taken to a hospital, where his condition stabilized, police said.

About 10 p.m., a 41-year-old man was wounded in a shooting Sunday night in the Altgeld Gardens neighborhood on the Far South Side.

The shooting happened about 10 p.m. in the 800 block of East 132nd Street, according to police.

The man was approached by someone who asked him, “Where are you from?”, police said. The person then pulled out a handgun and fired shots.

He was struck in his abdomen and back, and was taken to the University of Chicago Medical Center in serious condition, according to police.

Earlier in the morning, a teen boy was critically wounded in a Grand Crossing neighborhood shooting on the South Side.

He was taken to University of Chicago Medical Center in critical condition, police said. Witnesses told police they heard shots but did not see where they came from.

About 4:30 a.m., a man was critically wounded in the Little Village neighborhood on the Southwest Side.

The 24-year-old was walking in the 2700 block of West 25th Street when someone shot him in the abdomen, according to police. He was critically wounded.

The first nonfatal shooting wounded two men in the Roseland neighborhood on the Far South Side. The shooting happened about 2:30 a.m. in the 10800 block of South Princeton Avenue, according to police.

A 20-year-old was shot twice in his back, and a 21-year-old was shot in his face and body, police said. They were taken to Christ Medical Center in Oak Lawn in serious condition. No one was able to provide details about the shooting.