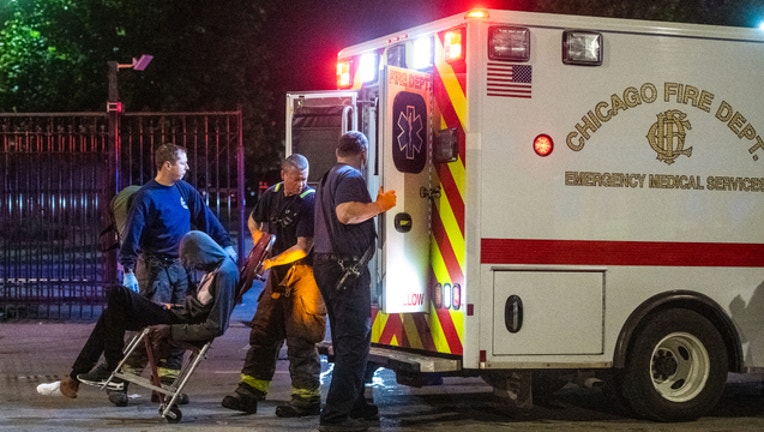 Chicago police on scene where four people including a pregnant woman, were shot, Friday morning, in the 6300 block of South King Drive, in the Parkway Gardens neighborhood. | Tyler LaRiviere/Sun-Times

On Sunday, a 28-year-old man was killed in Englewood.

The man was found about 3:54 a.m. in the 7300 block of South Oakley Avenue by officers responding to a ShotSpotter alert, Chicago police said. He was taken to Christ Medical Center in Oak Lawn with a gunshot wound to his neck and was later pronounced dead.

In Saturday's only fatal shooting, a 49-year-old woman was found with a gunshot wound to the head blocks away from Chicago State University.

Officers found Gloria Hentz about 1:59 a.m. outside a home in the 9700 block of South Dobson Avenue, police and the Cook County medical examiner's office said. She was taken to the University of Chicago Medical Center where she was later pronounced dead, authorities said. There aren't any witnesses to the shooting.

Two people died Friday in separate shootings. In the later incident, a 29-year-old man was killed in West Garfield Park.

Several males approached him about 10:11 p.m. as he was walking in the first block of North Kilbourn Avenue, police said. They fired shots and struck him in the back and upper body. The man died at Mount Sinai Hospital. Police said no witnesses have come forward, and the circumstances of the shooting are unknown.

Less than an hour earlier, a 27-year-old man was killed in Lawndale on the West Side.

Marvin Bennett was standing on a sidewalk about 9:20 p.m. in the 1500 block of South Christiana Avenue when someone unleashed gunfire, striking him in the head, police said. Bennett was pronounced dead at Mount Sinai Hospital.

Nonfatal shootings left three people wounded Sunday, including a 20-year-old man who was shot while driving in Garfield Park.

The man was eastbound about 8:54 p.m. in the 3900 block of West Jackson Boulevard when he heard shots and felt pain, police said. He kept driving a few blocks before calling police. He suffered a gunshot wound to the back and had his condition stabilized at Stroger Hospital.

A 19-year-old hurt in Lawndale was among Saturday's six people injured by gunfire.

About 6 p.m., he and a 56-year-old man were in the 3900 block of West Lexington Street when someone fired shots at them, police said.

The weekend's earliest shooting wounded a 23-year-old man in a South Loop alley.

He was behind a residential building about 5:35 p.m. in the 1600 block of South Michigan Avenue when a gunman approached him and fired shots, Chicago police said.

The man was shot in the knee and hand, and his condition was stabilized at Northwestern Memorial Hospital.