WASHINGTON - Saturday's election verdict isn’t the last step in selecting an American president. Under a system that’s been tweaked over two centuries, there is still a weekslong timeline during which the 538-member Electoral College picks the president.

A look at the key steps:

— When American citizens vote for a presidential candidate, they really are voting for electors in their state. Those electors in most cases are committed to support the voters' candidate of choice. The number of electors is equal to the number of electoral votes held by each state. State laws vary on how electors are selected but, generally, a slate of electors for each party's candidate is chosen at state party conventions or by a vote of a party’s central committee.

— After Election Day, states count and certify the results of the popular vote. When completed, each governor is required by law to prepare “as soon as practicable” documents known as “Certificates of Ascertainment” of the vote. The certificates list the electors' names and the number of votes cast for the winner and loser. The certificate, carrying the seal of each state, is sent to the archivist of the United States. 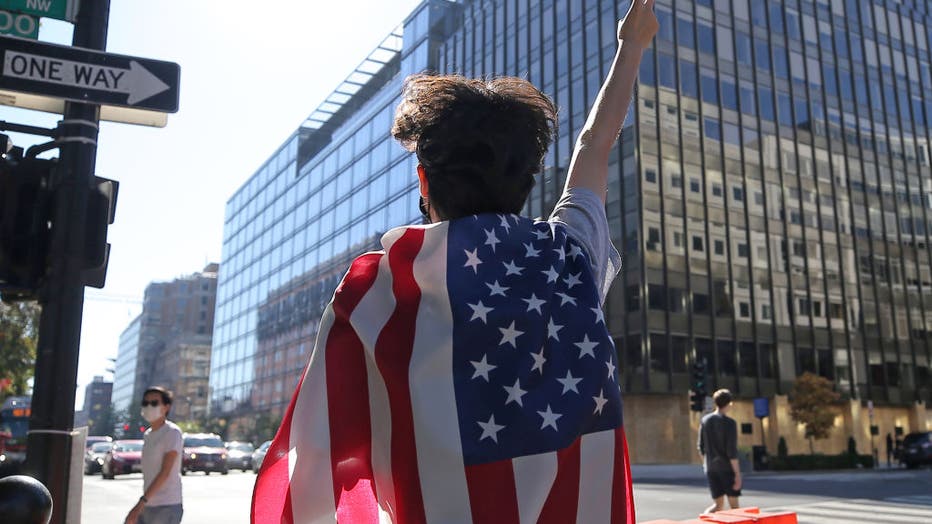 FILE - A man holds a US flag on his shoulders after the media announcement that Democratic Party nominee Joe Biden has won the 2020 US presidential election. (Yegor AleyevTASS via Getty Images)

— Dec. 8 is the deadline for resolving election disputes at the state level. All state recounts and court contests over presidential election results are to be completed by this date.

RELATED: In their own words: Joe Biden, Donald Trump issue statements after race is called

— Dec. 14: Electors vote by paper ballot in their respective states and the District of Columbia. Thirty-three states and D.C. have laws or party regulations requiring electors to vote the same way the popular vote goes in the state, and in some states, electors can even be replaced or subjected to penalties, according to the Congressional Research Service. The votes for president and vice president are counted and the electors sign six “Certificates of the Vote." The certificates, along with other official papers, are sent by registered mail to various officials, including the president of the Senate.

— Dec. 23: The certificates must be delivered to the designated officials. If they are not delivered, the law provides alternative avenues for getting the results to Washington.

— Jan. 6, 2021: The House and Senate hold a joint session to count the electoral votes. If one ticket has received 270 or more electoral votes, the president of the Senate, currently Vice President Mike Pence, announces the results.

RELATED: Who won the election? Joe Biden projected as winner of 2020 presidential race after claiming Pennsylvania

Members of Congress may object to returns from any state as they are announced. Objections must be made in writing by at least one member of the House and one in the Senate. If the objection meets certain requirements, each chamber meets separately to debate the objection for a maximum of two hours. Afterward, each chamber votes to accept or reject the objection. Back in joint session, the results of the respective votes are announced. Any objection to a state’s electoral vote has to be approved by both houses in order for any contested votes to be excluded.

If neither presidential candidate wins at least 270 electoral votes, the House decides the election, based on the 12th Amendment to the Constitution. If required, the House would elect the president through a majority vote.

— Jan. 20: The president-elect is sworn into office on Inauguration Day.