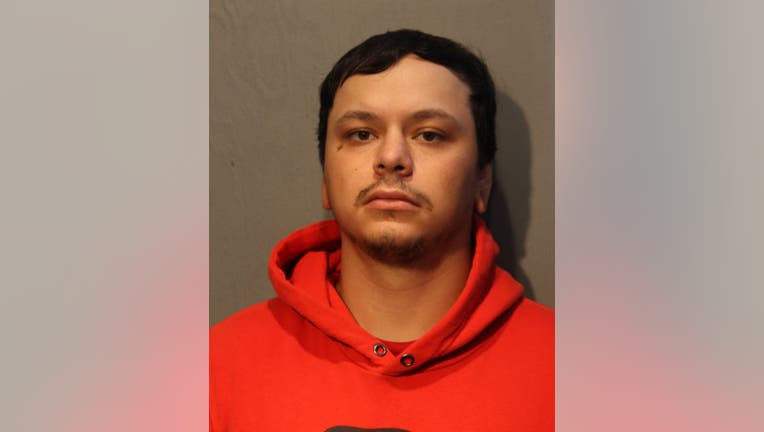 CHICAGO - A man accused of providing the gun that killed a 14-year-old girl in Back of the Yards allegedly confronted a fellow gang member weeks later, called him a snitch and shot him nine times.

Michael Aguirre, 26, was arrested Monday on the West Side on a murder charge for the June 2 slaying of Savanah Quintero. He’s also charged with attempted murder in the wounding a witness of the shooting.

Edgar Martinez, 17, has already been charged as the gunman in the killing of Quintero.

Martinez, Aguirre and another person had confronted the girl and her boyfriend as they walked their dog to a corner store at 48th and Wood streets. The three allegedly yelled gang slogans and asked about their affiliations.

As the couple left the store, the trio continued to harass them from across the street, prosecutors said.

After the girl said her mother belonged to a rival gang, Aguirre took a handgun from his fanny pack and handed it to Martinez, who fired twice at the couple, striking the 14-year-old girl in the head, prosecutors said. She died three days later.

Surveillance video shows the shooting as well as Aguirre passing the gun and later fleeing in a Chevy Tahoe, prosecutors said.

Aguirre sold the Tahoe two months later and, during the sale, tried to sell a semiautomatic handgun but the buyer declined to purchase it, prosecutors said.

On Aug. 29, Aguirre confronted a witness of the shooting, who was also a fellow gang member, as the man was leaving work in Roseland on the Far South Side, prosecutors said. Aguirre accused the man of "snitching" but the man denied it and said he was leaving to catch a bus back home.

On Wednesday, a 14-year-old Chicago girl who was walking her dog with her boyfriend was approached by suspects who asked if she was in a gang. The suspects then shot her in the head and ran away.

Aguirre continued to follow the man and confronted him again in the man’s neighborhood, prosecutors said. The man went down a side street but turned around and saw Aguirre pointing a gun at him, prosecutors said.

Aguirre opened fire and struck the man nine times, three times in his back, prosecutors said. The man spent a month in a hospital recovering from his wounds.

Aguirre has three children, a fiancee and has worked as a truck mechanic for the last two years, his attorney said.

Quintero’s murder was believed to be linked to an ongoing conflict between a long-entrenched gang and one that is relatively new to the area, the Sun-Times has reported.

At the time of the shootings, Aguirre was on bond for a pending drug delivery case in Will County.