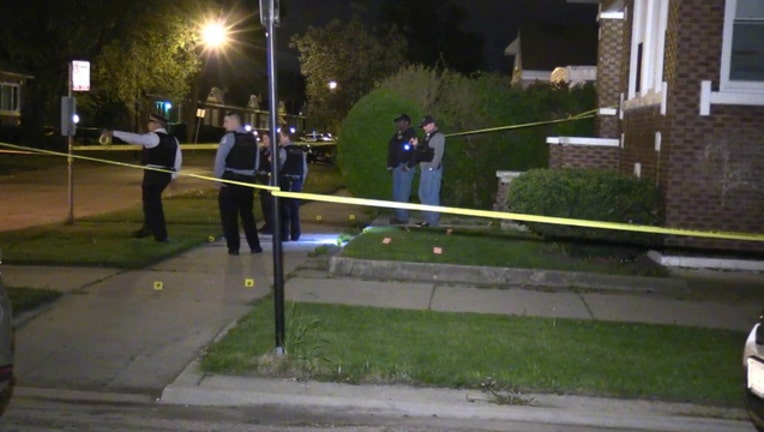 Police investigate after a woman was shot Tuesday night in the Gresham neighborhood. | Network Video Productions

CHICAGO (SUN TIMES WIRE) - Four men were killed and at least 13 other people were wounded in South and West side shootings Tuesday.

Most recently, a man was killed and another man wounded in a drive-by shooting late Tuesday in the South Side Pilsen neighborhood.

The men, ages 43 and 35, were standing on the sidewalk near South Halsted and West 18th streets at 11:40 p.m. when a male suspect fired shots from a silver-colored SUV, according to Chicago Police.

The 43-year-old, identified as Jesus Juarez, was shot in the chest and pronounced dead at the scene at 12 a.m., according to police and the Cook County medical examiner’s office. He lived in the 5400 block of South Luna.

The 35-year-old was shot in the left knee and taken to Stroger Hospital, where his condition was stabilized, police said.

About 9:10 p.m., another man was shot to death in the Chicago Lawn neighborhood, police said.

Jeremy Parker, 21, was standing in the street in the 7400 block of South Maplewood about 9:05 p.m. when someone in a passing vehicle shot him in the chest, authorities said. Parker, of the 7900 block of South Damen, was pronounced dead at the scene at 9:40 p.m.

Timothy Hill was standing in the back yard of a home in the 600 block of East Bowen Avenue when another male walked up and opened fire, authorities said. He suffered multiple gunshot wounds and was taken to Stroger Hospital, where he was pronounced dead at 12:14 a.m. Wednesday, according to the medical examiner’s office. Hill lived in the 500 block of East 40th Street.

The men were sitting on a front porch in the 4900 block of West Monroe at 1:52 p.m. when someone walked up and opened fire, according to police.

Antonio White, 29, was shot twice in the chest and taken to Stroger Hospital, where he was pronounced dead at 2:37 p.m., according to police and the medical examiner’s office. White’s home address wasn’t known Tuesday night.

The other man, an 18-year-old, was shot in the back and right leg and taken in serious condition to Stroger, police said.

The most recent nonfatal shooting was reported at 11:25 p.m. in the South Side Gresham neighborhood.

A 30-year-old woman was standing on the street in the 8800 block of South Laflin when she heard shots and realized she’d been hit, according to police. She suffered a graze wound to the back and was taken to Advocate Christ Medical Center in Oak Lawn, where her condition was stabilized.

About 10 minutes before that, a man was beaten and shot in the Marquette Park neighborhood on the Southwest Side. The 27-year-old was walking on the sidewalk in the 6300 block of South Artesian at 11:15 p.m. when several males started beating him, police said. During the attack, he was shot in the right shoulder. He was taken to Holy Cross Hospital, where his condition was stabilized.

Another male was shot about 10:35 p.m. in the Chatham neighborhood. The victim, whose exact age was not immediately known, was shot in the foot in the 8200 block of South Maryland, police said. He refused medical attention and additional details were not available late Tuesday.

About 90 minutes earlier, a woman was shot in the Greater Grand Crossing neighborhood on the South Side. The 22-year-old woman was in a vehicle in the 7000 block of South Wabash about 9:05 p.m. when a male on the sidewalk shot her in the left knee, police said. She was taken to the University of Chicago Medical Center, where her condition stabilized.

Two men, both thought to be in their 20s, were outside on a porch in the 6800 block of South Throop Street just before 6 p.m. when two males walked up and shot them, according to police. One of the victims suffered gunshot wounds to both legs and shoulder, and the other was shot in the left leg and abdomen, police said. They were both taken to Advocate Christ Medical Center in Oak Lawn in serious condition.

A man was shot in the West Pullman neighborhood on the Far South Side Tuesday night. The 31-year-old was walking in the 12100 block of South Emerald shortly before 6 p.m. when someone in a passing vehicle shot him in the back, police said. He was taken to Advocate Christ Medical Center, where he was listed in serious condition.

A man was shot in the leg Thursday afternoon in the Grand Boulevard neighborhood on the South Side. The shooting happened around 1:30 p.m. in the 5100 block of South Prairie, according to police. The 41-year-old was shot in the leg and taken to Stroger Hospital in good condition.

Tuesday’s first non-fatal shooting was reported about 11 a.m. A 41-year-old man was shot in the leg in the 4200 block of West Iowa, police said. He was taken to Mount Sinai Hospital, where his condition stabilized.