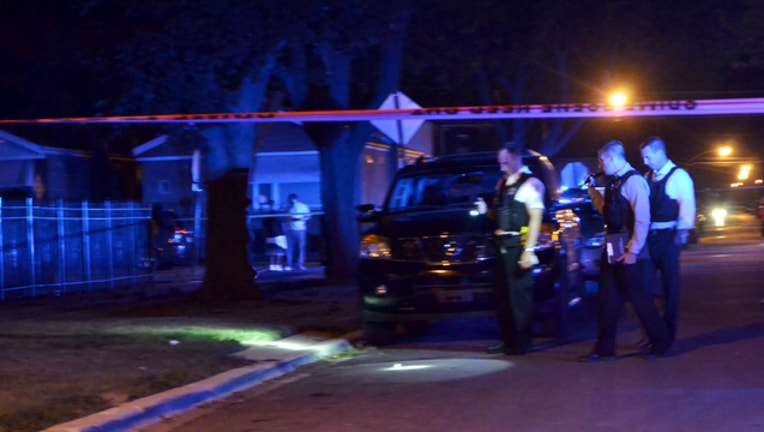 The first fatal shooting of the day left one man dead and another man critically wounded in the Washington Heights neighborhood on the Far South Side.

The two were standing on the sidewalk when they heard shots and felt pain about 9:45 p.m. in the 10500 block of South Peoria, according to Chicago police.

A 37-year-old man suffered multiple gunshot wounds to his body and a 41-year-old man was shot in the back, police said. They were both taken to Christ Medical Center in Oak Lawn, where the younger man was pronounced dead and the older man was listed in critical condition.

About 3:40 a.m., two people were killed and one was wounded when a vehicle they were in was shot at and crashed in the West Garfield Park neighborhood on the West Side.

Five people were traveling in the vehicle when someone fired shots into the vehicle, causing it to crash and strike a pillar in the 4300 block of West Lake, according to police.

Both were taken to Mount Sinai Hospital where they were pronounced dead, police said.

A 19-year-old man was shot in the chest and was in serious condition at Stroger Hospital, police said.

The other two people in the vehicle were not wounded.

The first fatal shooting of the day happened about 12:43 a.m. in the Fuller Park neighborhood on the South Side.

Labriel Lee was sitting in the front seat of a vehicle when someone walked up and spoke with him before firing shots in the 5200 block of South Wells, according to police and the Cook County Medical Examiner’s Office.

Lee suffered a gunshot wound to the head and was taken to the University of Chicago Medical Center, where he was pronounced dead at 3 a.m., authorities said. He lived in the Englewood neighborhood.

The shooter, who had a concealed carry permit, was taken into custody, police said.

The most recent non-fatal shooting happened about 2:20 p.m. in the West Garfield Park neighborhood.

Two men were standing on a corner in the 4500 block of West Wilcox when someone in a passing dark-colored vehicle fired shots, according to police.

An 18-year-old man was shot in the foot and a 21-year-old man suffered graze wounds to his back and leg, police said. Both got themselves to Mount Sinai Hospital, where they were listed in good condition.

About ten minutes earlier, a man was shot on the Far South Side.

The 21-year-old was shot in the leg while he rode a bike in the 13100 block of South Langley, according to police.

He was taken to a Roseland Community Hospital in good condition. A person of interest was taken into custody and was being questioned by detectives, police said.

At 10:17 a.m., a man was shot and seriously wounded in the East Chatham neighborhood on the South Side.

The 31-year-old was shot in the back and thigh when someone walked up and opened fire in the 800 block of East 80th Street, according to police.

He was taken to University of Chicago Medical Center, where he was in serious condition, police said.

The first non-fatal shooting of the day happened about 2 a.m., when a woman was shot in the head while fleeing what was believed to be an attempted robbery in the Englewood neighborhood on the South Side.

The 31-year-old was driving with two passengers when they stopped to talk to a male they didn’t know. Worried that they were about to be robbed, the woman drove away. The male fired shots at her vehicle as she drove off, striking her in the head in the 7300 block of South Union, according to police.

She was taken to the University of Chicago where she was in critical condition, police said.

On Tuesday, two people were killed and four others were wounded in shootings on the South Side and West Side.