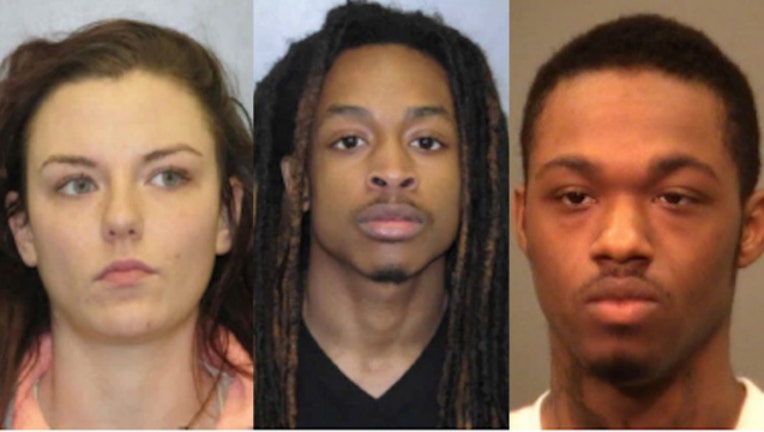 JOLIET (Sun-Times Media Wire) - A third person has been charged in the fatal shooting last week in a restaurant’s parking lot in southwest suburban Joliet.

Christopher C. Parker, 23, of Chicago, was ordered held on $5 million bail by a Will County judge on charges of first-degree murder, robbery and armed robbery in connection to the slaying of Gregory G. Brown Jr., according to Joliet police and court records.

Two other suspects, Bobbie J. Ollom, 23, and her 20-year-old boyfriend, Joshua T. Anderson, were arrested last week in Iowa and are facing the same charges, police said. Anderson is a Chicago resident, while Ollom lives in Seneca.

Police released a video last week showing Brown with a woman, later identified as Ollom, inside the restaurant’s lobby shortly before the shooting.

Parker and Anderson are accused of luring Brown to Ollom’s car with the intent of robbing him about 10 p.m. on April 30, police said. During the robbery, someone shot Brown in the head inside the car and dumped his body in the parking lot of the Denny’s, 2531 Plainfield Road.

The trio then drove off, eventually leaving Ollom’s vehicle in Chicago, police said. Ollom and Anderson got another vehicle and drove to Iowa.

Investigators learned that they might be staying with one of Ollom’s relatives near Burlington, Iowa, police said. Burlington police arrested them during a traffic stop on May 3.

They are both being held at the Des Moines Correctional Facility awaiting extradition to Illinois, police said.

Parker was taken into custody by Joliet police on Tuesday, police said. He remains in custody at the Will County Adult Detention Facility and is due back in court on May 30.