One person was killed and nine others were wounded in mass shootings less than 24 hours apart so far this Memorial Day weekend.

CHICAGO - Chicago experienced its most violent Memorial Day weekend in five years — 9 killed, 42 wounded — despite stepped up police patrols and a focus on neighborhood programs that city officials hoped would provide peaceful alternatives.

About half of those shot were on the West Side, most of them in a single police district, the 11th, where there were two mass shootings on Sunday. On the South Side, at least 14 people were shot. And downtown, where there has been a spike in shootings all year, four people were hit by gunfire.

The weekend was the most violent since 2017, when seven people were killed and 45 people were wounded, according to Chicago police data. The year before, 69 people had been shot over the long holiday weekend.

This past weekend’s toll is sharply higher than last year, when three people were killed and 34 others were wounded.

The Chicago Police Department canceled days off over the weekend, but Police Supt. David Brown was vague last Friday about the numbers of additional police officers assigned to work.

At the same news conference, Mayor Lori Lightfoot said weekend programs in 15 high-crime neighborhoods — including music-and-game-filled "kickbacks" with DJs — would be held later into the night to fill gaps pinpointed in conversations with young people in those neighborhoods.

On Saturday, faith leaders led a march for peace down Michigan Avenue. "There will be no silence till we end the violence," a group of about 50 people chanted as they marched down the Mag Mile to Millennium Park.

Many of the weekend shootings occurred in neighborhoods long troubled by gun violence. 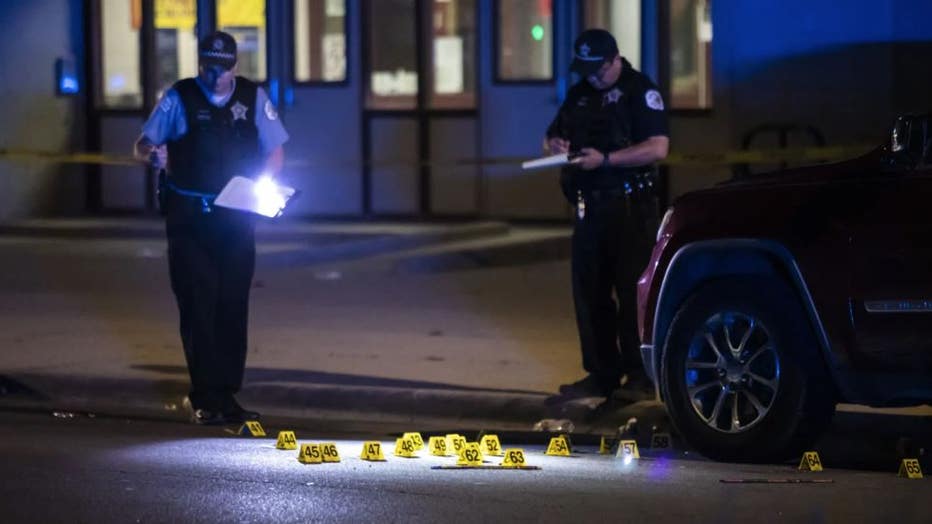 Police work the scene where five people were shot near an elementary school May 29, 2022 on the West Side. | Ashlee Rezin/Sun-Times

Other fatal shootings since 5 p.m. Friday: