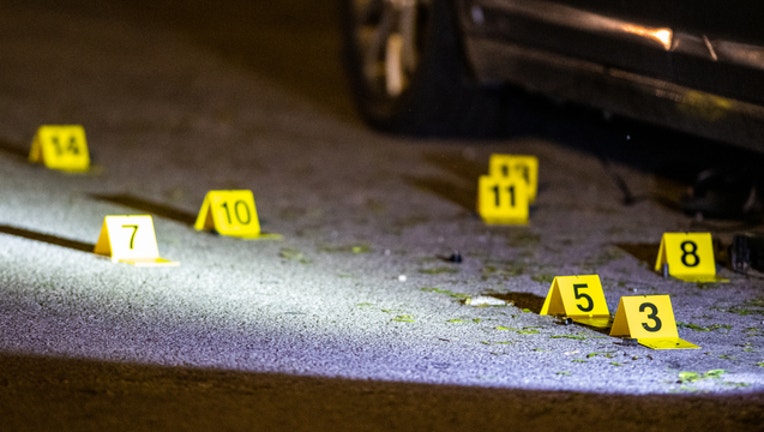 Chicago Police investigate the scene where a man was shot, Monday morning, in the 4400 block of South Princeton, in the Fuller Park neighborhood. | Tyler LaRiviere/Sun-Times

CHICAGO (SUN TIMES MEDIA WIRE) - Eight people were shot Monday in Chicago, including a man who was killed in Fifth City on the West Side.

Officers responding to a call of shots fired at 3:06 p.m. found the 30-year-old on the street with a gunshot wound to the back of his head in the 3400 block of West Congress Parkway, according to Chicago police. He was dead at the scene.

The Cook County medical examiner’s office has not released details about the fatality. Area North detectives are investigating.

In Monday’s latest shooting, a 15-year-old boy was shot in Roseland on the South Side.

The boy was walking about 11:38 p.m. in the 10400 block of South State Street when someone walked up and shot at him, police said.

The boy was struck in the leg and took himself to Roseland Community Hospital where his condition was stabilized, police said. Area South detectives are investigating.

Just after 11 p.m., two men were wounded in a drive-by in Wrightwood on the South Side.

The men were in an alley in the 2800 block of West 87th Street when someone inside a passing black sedan fired shots at them, police said.

A few hours earlier, a man was shot and wounded while delivering food in Bridgeport on the South Side.

The 20-year-old was dropping off food to a home in the 900 block of West 32nd Place at 7 p.m. when a gunman approached him and began firing, police said.

The man was struck in the arm and taken to Stroger Hospital in good condition, police said. Area Central detectives are investigating.

Monday morning, a woman with a concealed-carry license shot a man who tried to enter her home through a window Monday in Gresham on the South Side.

The 20-year-old man was trying to help an acquaintance who was locked out of her home at 8:41 a.m. in the 8900 block of South Lowe, according to police.

While he was trying to get in through the window, a 34-year-old woman inside the home shot him, police said. The woman, who lives at the home with the man’s friend, called 911 to report the shooting.

The man ran away and later showed up with gunshot wounds to his left shoulder and left knee at Little Company of Mary Hospital in Evergreen Park, police said. He was transferred to Christ Medical Center in Oak Lawn, where his condition was stabilized.

Area South detectives are questioning the man and the woman who shot him.

In Grand Crossing, a woman was wounded in a shooting while “soliciting” inside of a red Toyota sedan.

About 3:50 a.m., the 27-year-old was inside the car in the 7300 block of South Drexel Avenue when she started arguing with the male occupant, police said. The male pepper sprayed her and fired shots.

She didn’t recall if she was outside or inside the vehicle when she was struck in the leg, police said. She was taken to the University of Chicago Medical Center in good condition.

No arrests have been made as Area Central detectives are investigating.

In Monday’s first reported shooting, a 37-year-old man was shot inside a vehicle in Fuller Park on the South Side.

He was sitting in his parked car about 2:10 a.m. in the 4400 block of South Princeton Avenue when someone in a copper-colored vehicle opened fire, Chicago police said.

The man was taken to the University of Chicago Medical Center with gunshot wounds to the shoulder, stomach and leg, police said. His condition was stabilized.

Monday’s shootings follow a violent weekend in which 52 people were shot and 10 killed.