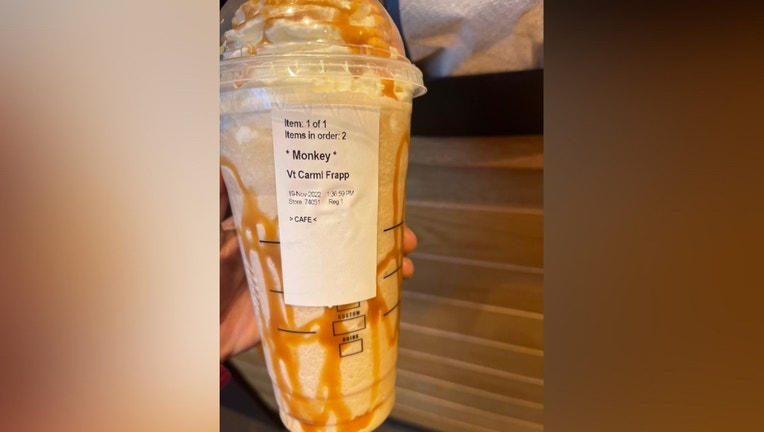 ANNAPOLIS, Md. - A Starbuck employee is suspended, and an investigation is underway after a Maryland woman reported that the word "monkey" was printed as the customer's name on her cup.

Monique Pugh said the incident happened on November 19 at a Starbucks store in Annapolis Mall.

According to Pugh, she was the only Black woman in line at the time that the label was printed.

After the incident, Pugh says she alerted the baristas to the word printed as her name. In response, she says, one of the baristas offered a nonchalant response saying it was a mistake.

Pugh then asked for a refund, and left the store to call Starbuck's customer service.

She says the store's general manager called her back, and offered her an apology along with a free drink and sandwich, which she declined.

A Starbuck employee is suspended, and an investigation is underway after a Maryland woman reported that the word "monkey" was printed as the customer's name on her cup.

In response, FOX 5 reached out to Starbucks about the incident for a statement.

The company says they are working with the store, which is a licensee location owned by Impeccable Brands, to investigate the matter.

You can read the full statement below:

"We want everyone in our stores – including both Starbucks operated and those operated by our licensees – to treat each other with dignity and respect. We do not tolerate behavior that is disrespectful or makes a customer feel unwelcome. We are aware of the incident that took place at a store operated by our licensee Impeccable Brands in Annapolis, MD, and we are working closely with their leadership team as they quickly conduct the investigation with their employee(s) and take any necessary action as a result."

The company also adds that they are taking steps to ensure offensive words cannot be printed on future order labels.

FOX 5 also reached out to Impeccable Brands about the incident. The store's ownership says the barista involved in the incident, who Pugh identified as a woman named Tina, has been suspended pending a further investigation

The statement says that the word was printed as a mistake, but they are working to make sure it does not happen again.

You can read the full statement below:

"As a licensee of Starbucks, we are committed to upholding the mission and values of the Starbucks brand in our customer interactions and business operations. We are aware of the regrettable incident that took place at our store in Annapolis, Maryland. We have suspended the employee involved in this incident pending further investigation, and have communicated our deepest apologies to the customer for this negative interaction. We believe, following our initial investigation, that the label was made in error. However, this is not the warm and welcoming experience we want to create for our customers and we are actively working to ensure this does not happen again. We are exploring other opportunities to better train our staff in understanding cultural and racial sensitivities, to ensure all future interactions are welcoming and inclusive."

Pugh says the incident left her "traumatized, saddened, and disappointed," and she also raised concern about how Starbuck trains its employees.

"To learn that the barista Tina who referred to me as a "monkey" completed the racial bias training which implies that she was aware of her actions and the consequences that will follow," Pugh says. "I would like to see this matter addressed promptly, and I want the racial discrimination to stop."