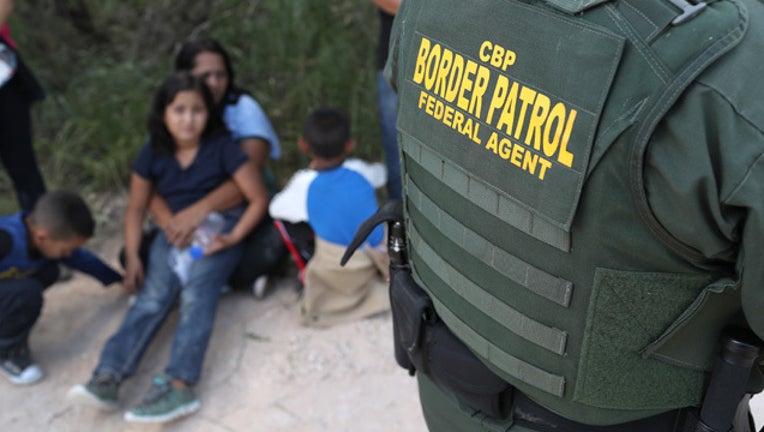 Asylum seekers wait as U.S. Border Patrol agents take them into custody on June 12, 2018 near McAllen, Texas. The families were then sent to a U.S. Customs and Border Protection processing center for possible separation (John Moore/Getty)

MIAMI (AP) - The office of Florida Gov. Ron DeSantis said Sunday that President Donald Trump told him he didn't approve and wouldn't authorize to fly hundreds of immigrants from the Mexican border to South Florida on a weekly basis.

The governor' spokeswoman Helen Ferre said DeSantis spoke with Trump on Saturday, two days after local officials reacted with alarm to a U.S. Border Patrol notification that 1,000 migrants could be sent to Palm Beach and Broward counties starting in about two weeks.

Despite the acknowledgment by acting Homeland Security Secretary Kevin McAleenan on Sunday that federal officials notified local officials of the possibility that migrants would be flown, Trump later blamed the media for "false reporting."

"There are no plans to send migrants to northern or Coastal Border facilities, including Florida," he said. "...Our country is FULL, will not, and cannot, take you in!"

After the plan was attacked by local leaders last week, federal officials initially said the flights were only being considered and nothing was happening immediately.

On Sunday, McAleenan said that Florida and other cities in the interior were no longer in consideration. He appeared on CBS' "Face the Nation" and said the plan "wasn't going to be an effective use of government resources."

"We looked at it from a planning perspective. We do have stations in Florida ... they are very small stations, they have a few agents that are busy patrolling their areas," he said. He added that the decision to take the sectors of Miami, Detroit and Buffalo off the table was made Saturday by John Sanders, acting commissioner of U.S. Customs and Border Protection. The agency's Miami sector includes all South Florida.

"We had to look at all options," he said.

The government has run out of space to process migrants who have been arriving at the Texas border. McAleenan said there are currently 16,000 people in custody at Border Patrol stations and ports of entry. The government began flying hundreds of migrants from Texas to San Diego, to distribute the workload at Border Patrol facilities more evenly.

Once migrants are processed, they are released and given a court date in a city where they plan to reside, often with family members, which could be anywhere in the U.S.

DeSantis apparently had been caught off guard and said such flights would amount to "dumping" migrants on Florida. He appeared upset that Florida was even a consideration, especially after he recently signed a bill banning sanctuary cities and pledging to help federal immigration authorities.

Trump and DeSantis are close. The president endorsed DeSantis, which propelled him from underdog to winner in last year's governor's race.

Palm Beach County Sheriff Ric Bradshaw, one of the first officials to publicly denounce the plan, suggested in an audio message shared via Twitter on Saturday that that the quick reactions with alarm from local officials and federal lawmakers who represent Florida made federal officials change their mind.

"Because of everybody's efforts, we were able to stop what it appeared to be a crisis for our communities."