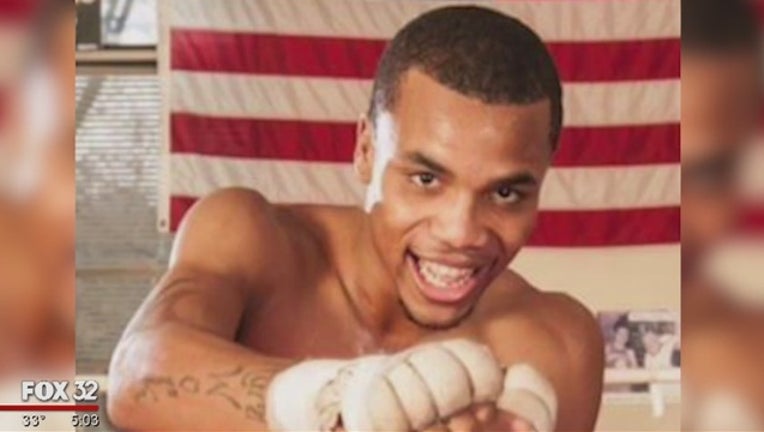 CHICAGO (Sun-Times Media Wire) - The man who helped mold him into a 20-0 professional boxer said “he was going to be a world champion.”

Instead, 25-year-old Ed “Bad Boy” Brown is the latest victim of Chicago’s violence, the Chicago Sun-Times is reporting. The child of Garfield Park who wore a Chicago flag uniform whenever he left town to fight was gunned down early Saturday within half a mile of his home, according to police and his co-manager, Mike Cericola.

Brown was sitting in a parked vehicle with a 19-year-old woman about 1:10 a.m. in the 3200 block of West Warren Boulevard when a silver vehicle pulled up and someone inside shot at them, police said. Brown was shot in the head, and the woman was shot in the left leg. Both were taken to Mount Sinai Hospital.

Brown was initially put on life support at the hospital, but was pronounced dead at 4:04 p.m. Sunday, according to the Cook County medical examiner’s office. He lived in the 500 block of South Lavergne.

The woman, his cousin, was listed in good condition, authorities said.

Brown lost his mother in the notorious E2 Chicago nightclub stampede, Cericola said, and his father was imprisoned around the same time. So it fell to Brown’s grandmother to raise him — along with Chicago’s park district and boxing community. The result was a sweet kid who unleashed his anger, and power, only when the bell rang. Eventually, Brown’s talent in the boxing ring caught the attention of Las Vegas’ Cameron Dunkin, who managed the super light weight along with Cericola.

Cericola said the boxing ring is often “the scariest place” for people, but it was the “safest” for Brown. He also said the fighter who grew up on the West Side was “done” with any gang involvement.

Brown was returning home from a gym early Saturday when he was shot, according to Cericola. Brown felt he needed to go to the gym to run, the manager said, because he didn’t feel safe running on the streets. Cericola added, “you can’t walk down the streets, let alone run.”

“You can’t sit on your porch, no matter who you are, especially on the west side of Chicago,” Cericola said. “You can’t take your garbage out. You can’t do anything.”