Pittsburgh's mayor and fire chief were among those who spoke to reporters on Jan. 28, 2022, to provide an update on a bridge collapse near the city's Frick Park.

PITTSBURGH - A bridge with multiple vehicles on it collapsed early Friday in Pittsburgh, Pennsylvania, causing several "minor" injuries and occurring hours ahead of a visit from President Joe Biden to discuss the country’s need for updated infrastructure.

The collapse of the Forbes Avenue Bridge was reported at 6:39 a.m. over Fern Hollow Creek in Frick Park, city officials said, asking all to "avoid the area." Five vehicles were on the two-lane bridge at the time, as well as a commuter bus.

Photos from the scene showed the bus upright on a section of the collapsed bridge. There was also a car upside down in front of the bus. 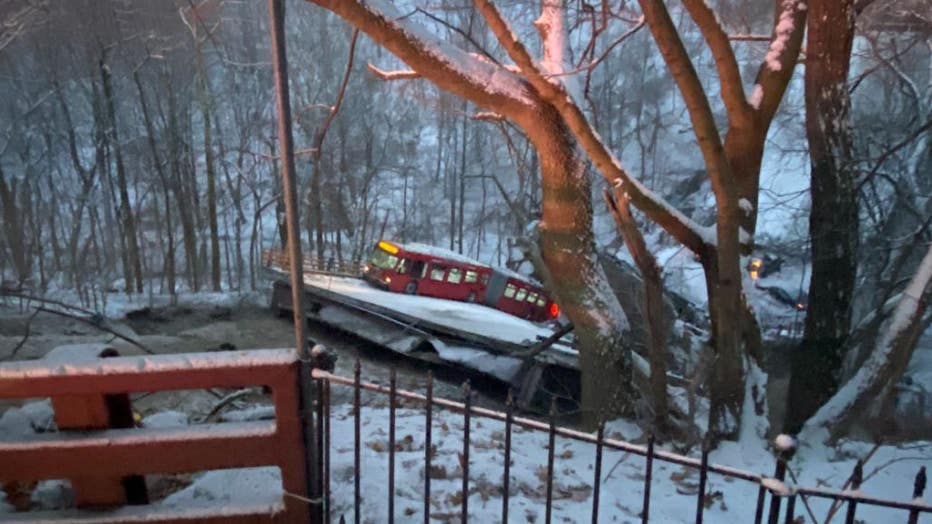 A commuter bus is pictured on the collapsed bridge in Pittsburgh, Pennsylvania, on Jan. 28, 2022. (Credit: Greg Barnhisel)

Rescuers had to rappel some 100 to 150 feet while others formed a human chain to help reach occupants of the bus, Pittsburgh Bureau of Fire Chief Darryl Jones said.

Ten people suffered "minor injuries," which mostly included first responders who were checked for exhaustion or because of the cold and snowy weather, officials said. Three people were taken to area hospitals, Jones said. None of the injuries were life-threatening.

A two-part, elongated Port Authority of Allegheny County bus was on the bridge when it collapsed, with two passengers aboard in addition to the driver, said Adam Brandolph, spokesperson for the transit agency. All three were taken off safely.

The bus had seven or eight cameras and any footage they captured of the collapse will be part of the investigation.

Authorities also said a natural gas line was cut in the collapse, prompting several families to briefly evacuate from their homes while crews worked to fix the leak.

Witnesses said the loud noise from the collapse was followed by a hissing sound and the smell of natural gas.

"The first sound was much more intense, and kind of a rumbling, which I guess was the structure, the deck hitting the ground," Ken Doyno, a resident who lives four houses away, told the Associated Press. "I mean, the whole house rattled at that point." 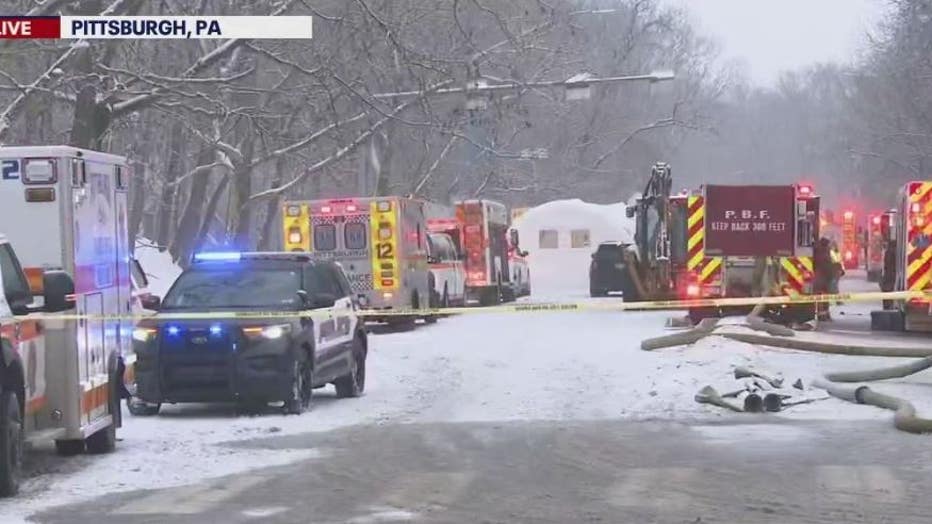 The scene outside of a bridge collapse in Pittsburgh, Pennsylvania, on Jan. 28, 2022. (Credit: KDKA-TV)

The bridge is an important artery that leads to the Squirrel Hill and Oakland neighborhoods and a popular route toward downtown Pittsburgh. Several neighbors said a weather-prompted two-hour school delay may have prevented a far worse human tragedy.

Biden had been already scheduled to visit the city on Friday afternoon to discuss the $1 trillion infrastructure bill that includes bridge maintenance. Following the collapse, Pittsburgh Mayor Ed Gainey called the new law "critical" to the city and state at large.

"We need it," Gainey told reporters. "We could have had some serious injuries... At the end of the day, this is critical that we have this funding." 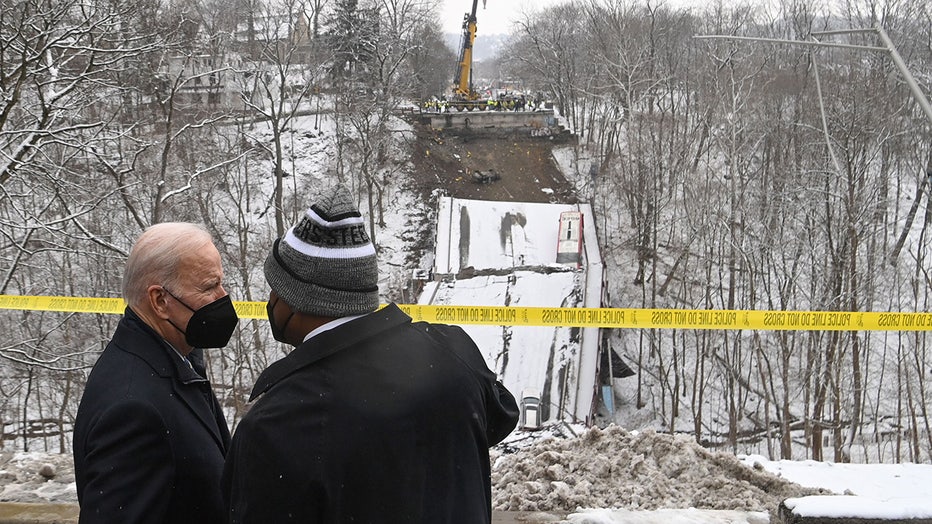 Biden later stopped at the scene of the bridge collapse during his visit. He shook hands with law enforcement at a command post and looked over a barrier to examine the damage.

"The idea that we’ve been so far behind on infrastructure for so many years, it’s mind-boggling," the president said.

The steel bridge, which was built in 1970, carries about 14,500 vehicles a day, according to a 2005 estimate. Wasserman said the most recent inspection occurred in September but the report was not immediately available.