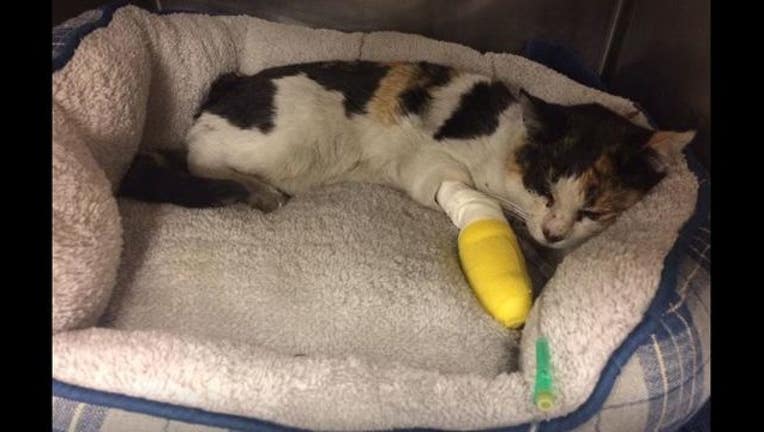 SANTA ROSA, Calif. (KTVU) - A 23-year-old woman was heartbroken when she had to leave her beloved cat "Kitty" behind in the fires.

Ohndrea Elliot tells KTVU her mom called her around 11 p.m. and said there was a fire starting in Calistoga.

Elliot woke up her roommates and they started packing up overnight bags and their three dogs. They thought the house would get smoky, but they expected to return the next day.

As Elliot was packing up she started to smell smoke and saw an ominous glow in the distant mountains. The wind was gusting as they frantically packed up their cars.

As her roommate was loading her car, a tree crashed onto it. They made the quick decision to leave the car running in the middle of the street.

"We had to get out of there. The sky was bright red and it all happened so fast," she said.

As they were leaving she saw Kitty, her 10-year-old calico cat, run across the street. "I felt horrible. It broke my heart. We had everyone else safe except Kitty. And she was the last thing I saw as we were leaving. She was running for her life."

The day after Elliot learned the home was burned along with her belongings; she began the search for Kitty. She didn't have any photos since they were lost in the fire but she began posting on social media. Elliot says, "I knew she was out there, she's tough and so smart!"

Elliot got in contact with the Sonoma Humane Society who sent her a photo of the scorched calico cat. Elliot says when she opened the photo and saw it was Kitty, "I broke down really hard. I couldn't breathe."

She learned Kitty had burnt paws and fur. Veterinarians at Sonoma Humane Society are trying to heal Kitty's padding on her paws and she's on pain medication while she recovers in a heated bed. "They have taken such good care of her. And they didn't ask for money. They did it without question. They are so busy with so many animals. I'm just so thankful."

Elliot was unaware that one of our KTVU crews had crossed paths with Kitty during our fire coverage. Our KTVU video showed a near lifeless cat with singed whiskers in the arms of a worried man. KTVU reporter Brooks Jarosz was en route to a story but stopped to try to help. He tried to look up the phone number of a veterinarian on his phone, but cell towers were down. The men gave Kitty water and a sheriff’s deputy drove up to help.

When Elliot watched the scene in our YouTube video she said she couldn’t stop crying. "Please if you find out who the neighbor was before I do, please tell me! I want to give him a big hug and thank him for holding her and keeping her so safe.”

Elliot is now finding comfort in visiting Kitty at the shelter. Kitty is getting plenty of TLC as Elliot takes one day at a time.