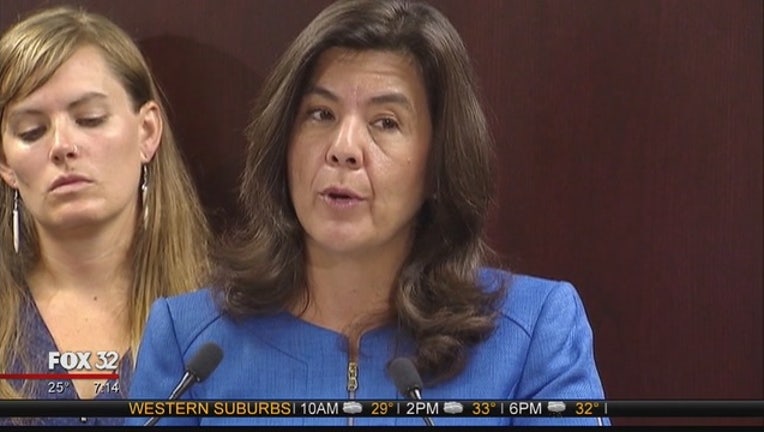 CHICAGO (AP) — In what has seemed an almost daily occurrence on the campaign trail, protesters have blocked streets and buildings to call for the resignation of the Chicago area's top prosecutor, who took a year to charge a white police officer in the death of a black teenager shot 16 times.

Anita Alvarez's handling of the Laquan McDonald's shooting — captured on a dashcam video that went viral — dominates ads, debates and demonstrations, but other scrutiny has dogged her two terms. Her opponents and other critics also claim the Cook County state's attorney lacked compassion in addressing the area's troubled history of wrongful convictions and was reluctant to embrace reforms to keep people out of jail.

Her primary re-election has become a race that questions the role of an urban prosecutor with two Democratic challengers picking apart her record.

Alvarez casts herself as a reformer who can win without establishment backing. She has defended delaying murder charges in McDonald's death, saying the investigation was complex despite graphic video evidence. She also fought back by touting vacated wrongful convictions and recent shifts prosecuting low-level offenders.

"The citizens of all of Cook County ... really need a prosecutor who is experienced and someone who is independent of politics," she said. "That's what I have been for the past eight years."

Her challengers in next week's primary dispute that. Former prosecutor Donna More says Alvarez favors police too often. Kim Foxx, a former aide to the county board president, says the office should be open to more community involvement to build trust.

Alvarez was elected state's attorney in 2008 after a legal career in the office. The first woman and the first Hispanic person elected to the post, she defeated five male primary candidates, pitching herself as tough on crime and a protective mother. She has won praise from victims groups for elevating their concerns. Alvarez also leads in fundraising and in one major poll .

But her leadership has been marked by stumbles, including on national airwaves. Critics highlight her suggesting in a "60 Minutes" interview that another man's DNA in a 1991 rape and murder case, where five men were wrongly convicted, could have been placed after death.

"It strikes me as showing that she has trouble looking critically at her own office and her own prosecution," said Katherine Levine, a professor at New York University's law school.

Alvarez says the 2012 broadcast distorted her comments and that the theory was used at trial before her involvement. She defends her office, saying its integrity unit has vacated 14 convictions.

Chicago-area attorney Kathleen Zellner, who works on such cases and donated to both Alvarez and Foxx's campaigns, praises the unit's responsiveness on the tedious work.

"She has kept it going," Zellner said.

Others argue it's not enough in a county that has led the nation in wrongful convictions. By comparison, Brooklyn District Attorney Ken Thompson vacated over 10 convictions his first year in office.

Another criticism is Alvarez has lagged in embracing alternative prosecuting and sentencing for low-level offenders, a sensitive issue as Cook County's overcrowded jail is the largest of its kind nationwide and disproportionately black.

Alvarez said her office increased such diversion programs from eight to 32, including one that allows less-serious drug offenders to enter a program before indictment if they follow strict rules. Alvarez also shifted last year on low-level drug offenders saying her office would stop prosecuting people arrested for less serious pot possession.

But top Democrats, including Foxx's former boss, Cook County Board President Toni Preckwinkle, said Alvarez was late to the game on taking that step.

Critics also questioned the timing, less than a month before the March 15 primary, of Alvarez's announcement that she'd pursue legislation that includes eliminating mandatory minimum sentences for some drug offenses.

For now, Alvarez fights backlash over the McDonald case and others by saying she tackles tough cases, citing nearly 100 police officers her office prosecuted.

"It's not her fault that this became such a hot topic nationally, but when it was her time to stand up, she didn't," said Michael Helfand, a Chicago criminal attorney. "You can't predict what's going to be the hot button thing you're going to get judged by."