Video has been released of a shooting in the Loop that left one man seriously wounded in a shootout with Chicago police Wednesday night.

CHICAGO - A man charged with attempted murder of a Chicago cop in a shootout in the Loop is being held without bail.

According to prosecutors, a CPD officer, who was on patrol, saw a vehicle being driven by 20-year-old Noel Centeno near Columbus and Lower Wacker Drive at about 8:48 p.m. Wednesday.

Officers had been alerted that the vehicle allegedly driven by Centeno was stolen in a carjacking.

CPD officers positioned their vehicle in from of the car driven by Centano, blocking its path, prosecutors said.

Centeno then allegedly reversed his car, striking a vehicle located behind him.

An officer, who was in full uniform, approached the suspect vehicle on the front passenger side, and was heard on body camera telling the occupants to show their hands, prosecutors said.

That is when Perez allegedly fired a handgun at the officer.

Smoke could be seen on camera emanating from the gunshot, prosecutors said.

The officer who was shot at grabbed his right shoulder and fell to the ground. Prosecutors said he was not struck by gunfire, though he may have been struck by the glass shards from the window Perez allegedly fired through.

Video from the officer's body camera allegedly showed the passenger window being blown out by Perez's gunshot.

Additional officers then fired multiple shots at Perez. He was struck in the chest, arm and leg and transported to a local hospital.

It was a hectic 24 hours in the Loop between a bomb squad investigation Thursday afternoon, and a police shooting Wednesday night.

The officer who was shot at was taken to an area hospital for eye damage from the window shards.

Another officer was also taken to the hospital for a rapid heart rate.

Prosecutors said Perez's weapon, a Glock 9mm with an extended clip and laser sight, was recovered at the scene.

Prosecutors also say a 9mm casing was recovered from the vehicle.

The headstamp from the casing allegedly matched Perez's gun and none of the officers.

A chrome revolver with a brown handle was also recovered near Sanchez, prosecutors said.

Centeno addressed the court Friday and said that he found the vehicle that the three suspects were in during the time of the shooting on Howard Street in Skokie with keys in it.

He denied carjacking anyone, prosecutors said.

Sanchez also addressed the court and said that Centeno backed up the car and then the police started shooting. He said that he didn't know anything about the car.

When police asked Sanchez about the revolver found near him in the car, he said the gun was his. 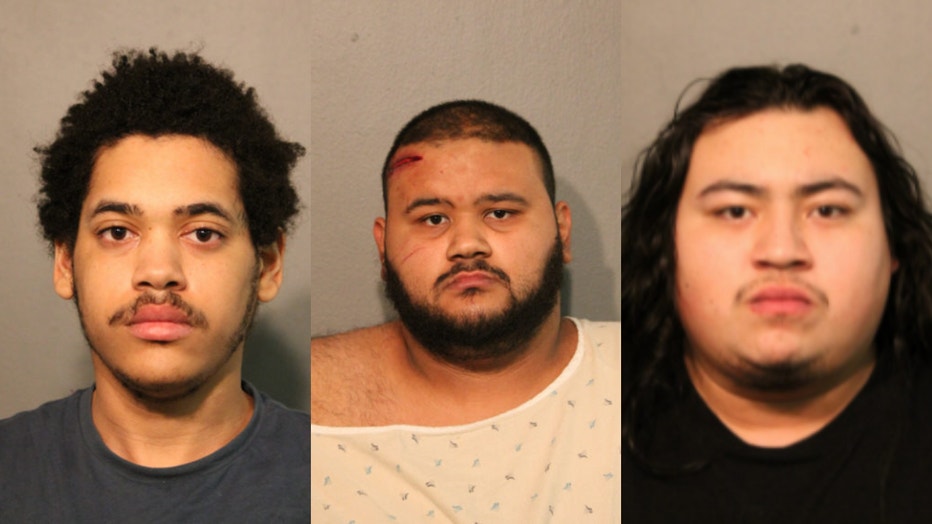 On Jan. 18, a no bail warrant was issued for Centeno.

He also has an adjudication of delinquency for armed robbery from 2018 and was sentenced to probation.

Perez was previously charged with misdemeanor of criminal damage to property in 2016.

Sanchez was previously charged with obstructing identification in 2019. He also has an adjudication of delinquency for aggravated battery in 2018. That case was closed.