Supt. Eddie Johnson sits down with FOX 32 after announcing his retirement

CHICAGO - Chicago Police Superintendent Eddie Johnson announced Thursday that he's retiring after more than three years as the city's top cop, a post he took over during one of the most violent chapters in the city's history and amid public outcry over the release of a video showing an officer shooting a black teen 16 times.

During a news conference in which Johnson announced his retirement, Mayor Lori Lightfoot said he'd agreed to serve through the end of the year. A successor hasn't yet been named, but according to the Chicago Tribune, former LAPD chief Charlie Beck will be named the interim top cop for the city.

"These stars can sometimes feel like you're carrying the weight of the world," said Johnson, whose uniform includes four stars on each shoulder. "This job has taken its toll, taken a toll on my health, my family, my friends."

Johnson, who joined the force as a patrolman in 1988, signaled earlier in the week that he was mulling retirement because he wanted to spend more time with family. He said the decision would have nothing to do with an investigation into a recent incident in which he was found asleep behind the wheel of his SUV at a stop sign and his admission to Lightfoot that he'd had a "couple of drinks with dinner" that night.

He also has come under withering ridicule from President Donald Trump, both on Twitter and in a recent Chicago speech that Johnson boycotted to a national conference of police chiefs in which Trump called the city a haven for criminals.

President Donald Trump is criticizing Chicago Police Superintendent Eddie Johnson for declining to attend a conference of police chiefs from around the country.

Johnson said none of that contributed to his decision to step down. He said the toll his job took on his family came into focus when he saw the pain on the faces of widows of officers who were killed this year, and in October when he went on his first family vacation since becoming chief.

"I saw how they missed me in that kind of setting ... and that's pretty much what did it," he said. "I can't keep punishing them."

Johnson, a native Chicagoan, held just about every rank in his more than three decades career on the force. He was named superintendent in 2016 by then-Mayor Rahm Emanuel, who had fired Superintendent Garry McCarthy after the release of the now-infamous video of Officer Jason Van Dyke fatally shooting 17-year-old Laquan McDonald. Johnson, then the interim chief, hadn't even applied, but Emanuel eschewed the recommendations of the police board and chose him.

An African American who spent his early childhood living in one of the city's most notorious public housing projects, the soft-spoken Johnson was a popular choice with the rank-and-file who felt they could trust him far more than McCarthy, a brash outsider who spent the bulk of his career in New York.

Chicago Police Superintendent Eddie Johnson says he's retiring after more than 30 years with the department, saying this is "the only home I've ever known."

Johnson inherited a department that was in the midst of what seemed like a running gun battle on the streets as rival gangs and drug dealers shot it out for control of the streets. By the end of his first year on the job, the city saw thousands of shooting incidents, the number of dead totaled nearly 800 - or 300 more than just the year before.

The next year things improved, but the street warfare had become a national media story and even the reports that the number of homicides had dropped to 664 all seemed to include the reminder that the number was higher than the combined total of homicides of New York and Los Angeles.

And he had to contend with Trump, who repeatedly pointed to the gun violence in the city in his campaign and into his presidency to claim that the bloodshed could be halted if the city allowed its police officers to crack down on crime. At one point, Johnson called Trump on his claim that an officer told him that gun violence could be solved "in a week," publicly telling the president if he has such a plan, he should share it.

Lightfoot praised Johnson Thursday for his willingness to implement reforms that make the city safer. She also noted how he stood up to the Trump administration by refusing to cooperate with federal agents' efforts to capture immigrants living in the country illegally, and more recently by boycotting the president's speech to a police chiefs convention.

"The superintendent stood tall and refused to stand on the stage with a president who has villainized our city's values (and) repeatedly lied about or progress on violent crime and about the superintendent personally," Lightfoot said.

Johnson set out to beef up his force, presiding over an effort to hire more officers that has increased the size of the force by about 1,000. Under his leadership, the city also dramatically expanded the use of high-tech crime-fighting technology that allows officers to know almost immediately where shots are coming from, install scores more surveillance cameras and embark on the largest rollout of police body cameras in the United States. 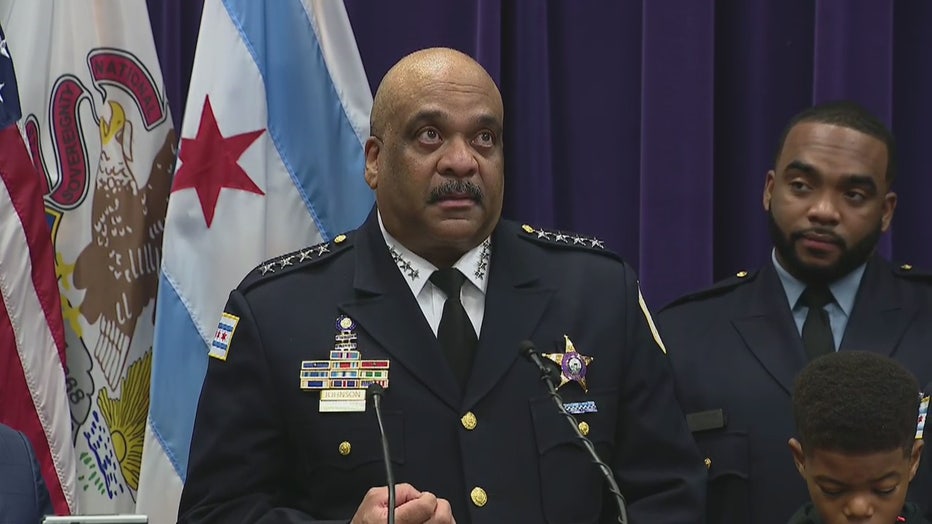 As the McDonald case was advancing in court, Johnson also looked for ways to restore public confidence that had been shattered by the shooting and allegations that Van Dyke's supervisors and fellow officers had made a concerted effort to keep secret what happened that night in October 2014.

The McDonald shooting and the arrest of Van Dyke - the first police officer to be criminally charged in an on-duty shooting in decades - shined a light on a police force where officers are rarely disciplined for misconduct or officer-involved shootings.

In a blistering report, the U.S. Justice Department found a long history in the department of racial bias and excessive force by officers. That led to wholesale changes in the way offices are investigated and last year the implementation of a federal consent decree that calls for more community policing, better officer training and a requirement that officers fill out paperwork every time they point a gun at someone, even if they don't fire.

Johnson's willingness to show his human side helped him weather difficult times and endeared him to both his department and the city. He became emotional when he faced the press to talk about the shooting death of a longtime commander, and close friend, Paul Bauer. He showed his anger when he announced the arrest of actor Jussie Smollett, casting what he said was Smollett's staged racist attack as an attack on the city itself. And he had the city rooting for him when he had a kidney transplant.