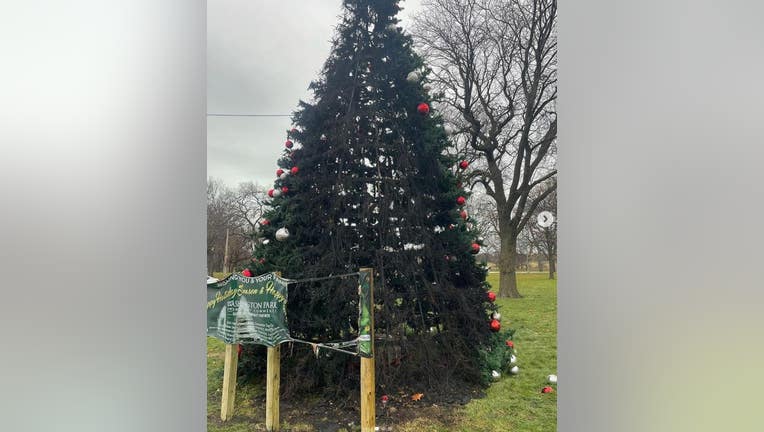 CHICAGO - Four volunteers were robbed while putting up Christmas decorations in Chicago, and a tree that had been decorated by the group went up in flames.

The volunteers were with "My Block, My Hood, My City" and the tree had just been lit up in a festive ceremony on Saturday night.

The women told investigators they were decorating a fence on Saturday afternoon in Bronzeville when a group of people got out of a white SUV and took their wallets and purses, then took off.

The Christmas tree installed at Washington Park by "My Block, My Hood, My City" caught fire overnight. This is the second year in a row the group's tree has been burned.

"My Block, My Hood, My City" said in a statement: "It’s unfortunate that an event that was supposed to bring the community together resulted in the burning of a beautiful tree. While it is a setback it’s not going to stop us from beautifying the community through the holiday season. I want to thank our volunteers for coming out. We were still able to decorate over 200 homes along King Drive."

The group plans to have volunteers decorating more homes next weekend.

Another event held on the city’s South Side on Saturday was sponsored by the Washington Park Chamber of Commerce in collaboration with "My Block, My Hood, My City." Three hundred people decorated Washington Park, adding ribbons, garland and so much more. Some volunteers went door to door. Nate Rodgers reports.