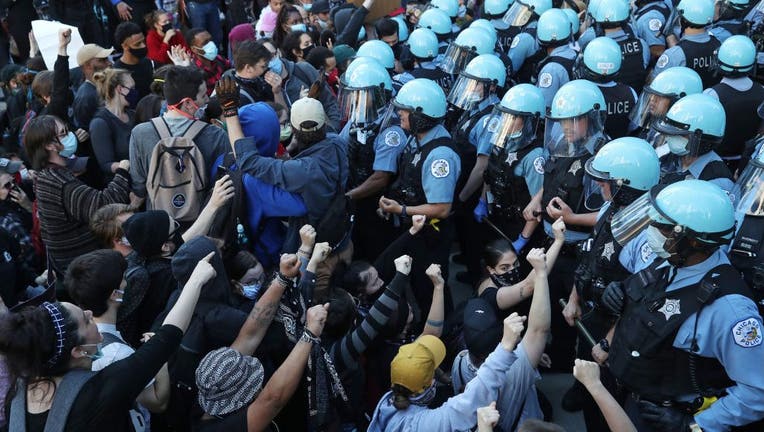 Police officers guarding the Trump International Hotel & Tower hold back protesters during a rally and march to remember the May 25 killing of George Floyd by a Minneapolis police officer, in the Loop Saturday, May 30, 2020, in Chicago. (John J.

CHICAGO - Complaints against Chicago police officers rose to record levels amid protests throughout the city following the death of George Floyd in Minneapolis, city data shows.

About 900 complaints were filed between the first day of protests on May 26 until June 29, the last day records were available, the Chicago Sun-Times reported.

There were 99 complaints on June 4, the most of any day in the last 13 years, according to the newspaper’s review of public information.

Chicago police spokesman Luis Agostini said in a statement that “during the period of civil unrest, enforcement action was appropriately taken when individuals were violating the law and participating in criminal acts.”

But civil rights groups and attorneys representing organizers of the protests say many videos taken during protests show officers using force against protesters who weren’t breaking the law.

A total of 413 complaints were identified to be directly related to the protests between May 29 and June 5, 55% of which were for excessive force, 22% for improper searches and 11% for verbal abuse, according to a recent report by the Civilian Office of Police Accountability.

Chicago activists say complaints filed with COPA, which investigates police misconduct, and the police department’s Bureau of Internal Affairs likely don’t represent the actual number of alleged incidents in June. Some allegations have led to investigations of Chicago officers.

“I think it’s evidence that there was a level of (police) brutality that people experienced at a historic, alarming rate,” said Aislinn Pulley, a founder of Black Lives Matter Chicago.

Floyd, a Black man, died after a white officer pressed his knee into Floyd’s neck in Minneapolis. His death sparked protests worldwide against racial injustice and police brutality.

Activists said that a teenager was punched in the mouth by a police officer during a protest at the Christopher Columbus statue in Grant Park on Friday night. Video shows Miracle Boyd, 18, being hit in the face, knocking out teeth. Fellow activists told Fox 32 News that she was there filming encounters to keep police accountable. They said that the officer who hit her had wanted her to stop recording.

Following the death of Floyd and the resulting protests, COPA said it formed a specialized team of investigative personnel and began reviewing and responding to complaints in real time.

“While we have witnessed officers exercising restraint and professionalism during tense and at times violent confrontations we have also witnessed uses of force which appear excessive,” COPA spokesman Ephraim Eaddy said.