'We love y'all': Founder of group robbed while decorating homes shows compassion towards suspects

A weekend event that was meant to spread hope was dimmed when four volunteers were robbed Saturday night while putting up Christmas decorations in Bronzeville on the South Side.

CHICAGO - A weekend event that was meant to spread hope was dimmed when four volunteers were robbed Saturday night while putting up Christmas decorations in Bronzeville on the South Side.

The volunteers with My Block, My Hood, My City were hanging Christmas lights at a home near 48th Street and Martin Luther King Drive when multiple suspects approached them and demanded their belongings.

The suspects fled in a white SUV with a purse, wallet and fanny pack.

A Christmas tree the group had installed in Washington Park was also lit on fire. It was the second year in a row the group's tree had been burned.

The founder of MBMHMC, Jahmal Cole, said on Monday the goal of the Be A Part of Light initiative is to bring joy and Christmas cheer by hanging lights and decorations on a 12-mile stretch of King Drive.

"That's the point of Be Apart of Light, it's to interrupt trauma that exists on King Drive," Cole said. "There's no holiday lights, it's only helicopter lights and people ordering their food through bulletproof glass. That's not inspiring. So we got to hang holiday lights and interrupt all that trauma and inspire hope." 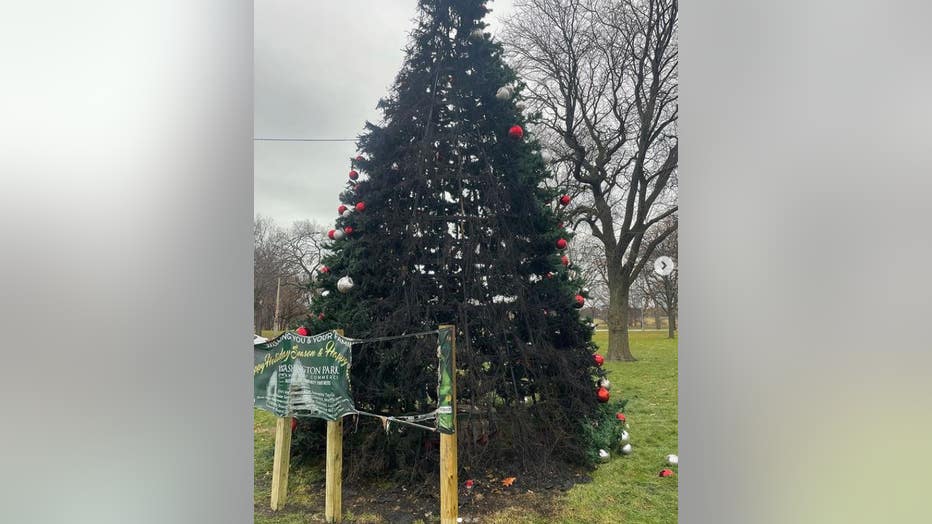 Cole said the robbery and vandalism hasn't deterred the group of its mission to decorate 500 homes on King Drive.

Volunteers will continue decorating more homes next weekend along King Drive and Cole said the group plans to replace the tree that was burned.

Cole also expressed compassion for the suspects and asked them to take time to evaluate what motivates them in life.

"I would just say this man, if you out there burning down trees, you got the time to write down some goals for yourself, you know what I mean? Like, what are your goals, what moves you, what are you passionate about," Cole said.

"We're not the enemy. Whoever done that, we love y'all. Ya'll probably don't hear that enough. But I just feel like you know you need to work on your goals. You don't tear up where you sleep at, that's crazy."

Cole said anyone who wants to help support the group's holiday initiative can visit ForMyBlock.org for more details.

"If you want to support our cause, just go to ForMyBlock.org and we have an Amazon wish list. You can support with garland, lights, ribbons, bows or gifts for students and we appreciate that," Cole said.

No suspects were in custody, according to Cole.