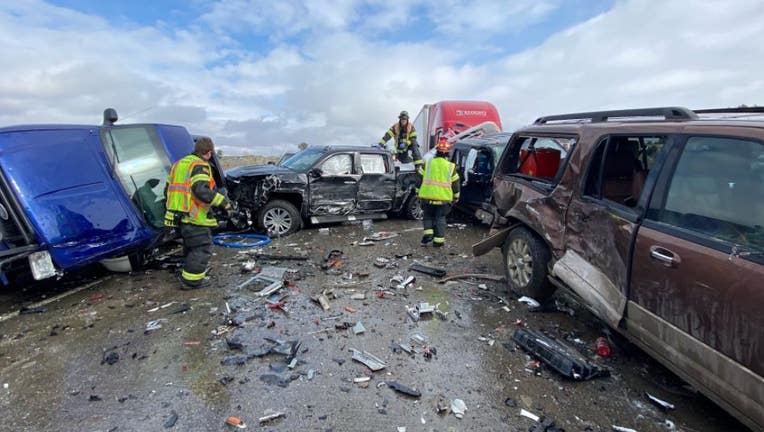 BILLINGS, Montana - Dozens of vehicles crashed into each other Saturday on an icy interstate highway bridge over the Yellowstone River outside Billings, Montana, making the span appear like a wrecking yard with mashed cars and trucks.

The pileup involved about 30 vehicles, the Montana Highway Patrol said on Twitter. No fatalities were reported but two people were critically injured, the highway patrol said. It blamed ice on the bridge as a cause for the wreck which closed Interstate 90 for a time.

First responders found the two injured people under the bridge; they had jumped off to avoid being hit.

A Billings city bus was sent to the scene to transport several travelers whose vehicles were wrecked or were pinned by other crashed vehicles, and transported them to an events center.

"It was like bumper cars," Bella Contreraz told the newspaper. She said she slammed on her brakes when she saw vehicles stopped ahead of her. An oncoming semi truck struck her vehicle, pinning it to the side of the bridge. Another driver, she said, helped her escape by prying open her door.

Billings streets were tied up with traffic as drivers sought alternate routes.

Dealing with the snow is proving to be very tricky for homeowners.