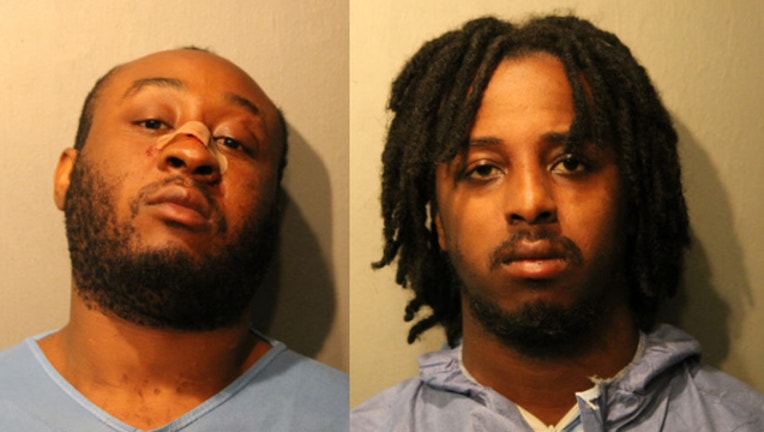 CHICAGO (SUN TIMES MEDIA WIRE) - Two men have been charged in connection with a shooting that left two people dead and three injured Sunday at the ABLA public housing community on the Near West Side.

Martez Cox, 27, had chased Covens to a vehicle and shot at him, grazing him in the nose, about 6 a.m. in the 1300 block of West Hastings, according to Chicago police and the Cook County medical examiner’s office. Covens then returned fire, hitting the Cox the neck.

Another man, 28-year-old Antonio Green, also suffered a gunshot wound through his right arm and into his torso, police and the medical examiner’s office said. Both men were taken to Stroger Hospital, where they were pronounced dead.

Two women who were sitting in a black sedan were shot as well, and both are in good condition at Mount Sinai Hospital. One woman, 31, had been struck in the hip and the other, 25, was hit in the left arm.

Responding officers arrived at the scene to find Covens and Wilkins inside a vehicle with security guards pointing guns at them, police said. Covens was taken into custody and brought to Stroger Hospital to be treated for his graze wound.

Police said the charge against Covens stems from the fact that his gunshots hit the sedan with the women inside. He was not charged with murder because he was firing in self-defense.

Wilkins was charged after multiple handguns were recovered from inside the vehicle he was driving, police said. Both men are scheduled to appear in bond court on Tuesday.

Police believe the incident is related to a shooting that happened about 1:30 a.m. earlier Sunday morning on the same block, in which one man was killed and a woman was wounded, Chicago police spokesman Anthony Guglielmi said. Prior to that shooting, officers had visited that block several times throughout the night to disperse a group of hundreds of people that were gathered outside.

Chicago Police Superintendent Eddie Johnson is meeting with command staff and Chicago Housing Authority officials Sunday to discuss the private security patrols that are assigned to the complex, Guglielmi said.