CHICAGO - After enjoying a "beautiful afternoon" at the Garfield Park Conservatory, Linda Mensch and a longtime friend walked out with a brightly painted pot from the gift shop.

Her friend offered to carry the heavy pot, and Mensch followed a few feet behind as they walked through the crosswalk in front of the West Side conservatory. A black van barreled past and hit Mensch, the driver getting out briefly before speeding away.

Mensch, 70, died at the hospital, her death mourned by musicians and artists and others she helped as a lawyer.

That was a week ago and there has been no arrest, despite considerable evidence provided by witnesses and a police surveillance camera.

At least three witnesses said they saw the driver as he got out, including the friend who gave a description to investigators. Police have the van’s license plate number and the name of the owner. The camera caught the hit-and run.

Police have released images of a black 2007 GMC Savana cargo van, along with a plate number, but no description of the driver.

Mensch’s daughter Jessica Heyman, a public defender in New York City, said the family has received no updates from police. A spokesman for the department would only say the investigation was continuing and no one was in custody.

"It’s a little disappointing," Heyman said. "I’m assuming that they’ve taken it seriously, but they haven’t really been in touch to keep us updated at all." 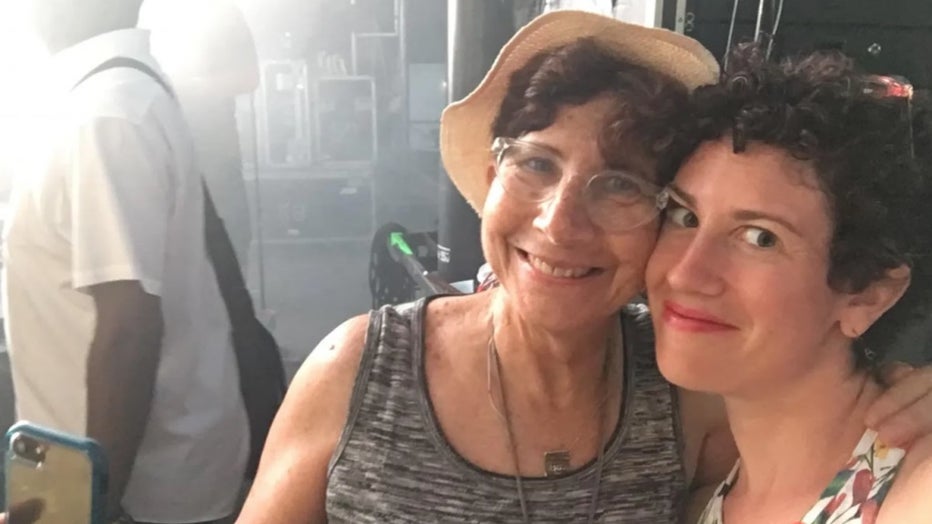 Linda Mensch, pictured with daughter Jessica Heyman, was killed in a hit and run crash August 26, 2021 outside the Garfield Park Conservatory. | Provided by Lynn Orman Weiss

‘An endless zest for life’

Heyman said she will remember her mother as a powerful, kind and generous woman who had "an endless zest for life" and a deep appreciation of the arts and music.

"She just gave great advice," Heyman said. "She always made everything seem easy. She knew the right person to talk to to make whatever it is you want to have happened happen."

Mensch grew up in New York and came to Chicago decades ago to begin a long career as an entertainment lawyer.

"She wanted to uplift young people and people in the music industry — she was very passionate about artists’ rights and she loved, loved finding new music," said Lynn Orman Weiss, Mensch’s longtime colleague and friend.

In the 1990s, Mensch became president of the Chicago Chapter of the Recording Academy and tapped Orman Weiss to serve as vice president. The pair went to about 25 Grammy Awards shows together.

Mensch began hosting a Grammy party in California before the ceremony for Chicago-based nominees.

"She was a life force," Orman Weiss said. "And just a very humble human being. With everything she did in life and all of the people that she helped, she never wanted accolades."

Mensch worked closely with a number of acclaimed artists, including Ella Jenkins, Honeyboy Edwards and the group the Ohio Players. A member of that group, James "Diamond" Williams, recently told Wiess that it was Mensch who helped the band secure their contract with Mercury Records back in the early 1970s. Mensch also briefly represented R. Kelly but resigned in 2018.

‘We had a continuous vision’

Mensch served as a president of Lawyers of the Creative Arts, a group that provides free legal services for artists and entertainers.

"We just had a continuous vision that we could make Chicago and the rest of the world a better place through the arts and through helping one another," Orman Weiss said.

For over a decade, Mensch served as a board member at "A Safe Haven," an organization dedicated to preventing homelessness in the city.

"She was busy in her personal life and at the same time not too busy to help other people," Abe Thompson, a friend and fellow board member said.

Thompson could not remember exactly when he met Mensch — it was too long ago — but said she was like family, someone he was "proud to know and love."

Many couldn’t believe Mensch was 70 when she died, her daughter said, because "she was ageless in her energy."

Heyman said police stopped by the family’s home the night of the crash to notify them of Mensch’s death, and returned the next day to conduct a photo array with her friend who witnessed the accident.

"I was going to try and call over, but as far as I know I don’t even see a card in the house to figure out who to contact," Heyman said.

"We’ve also gotten a lot of comments from both the Garfield Park Conservatory board and the officers that were at the scene that this is an area that has a lot of hit-and-runs and a lot of unsafe driving," she said.

"It was the main entrance to the conservatory, like the main door," Heyman added. "To have no markings there whatsoever to tell cars they are supposed to be slowing down (and) watch out for pedestrians, seems very confusing to me."