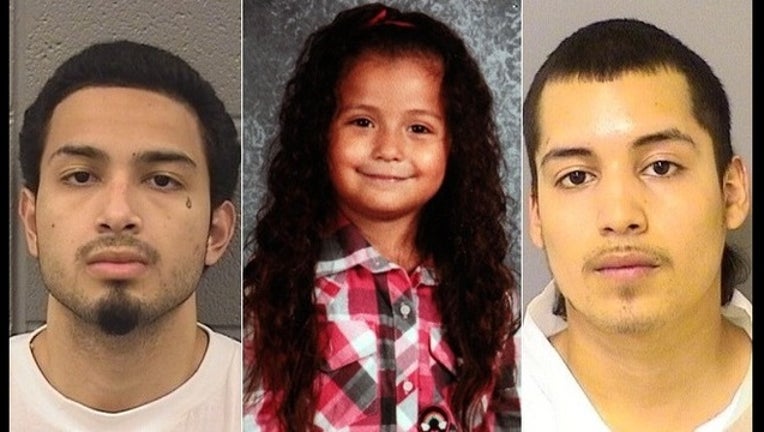 CHICAGO (STMW) - Two Latin Kings gang members convicted of murdering a 6-year-old girl as she sat with her family on their porch  in the Southwest Side Little Village neighborhood were sentenced Monday to more than 50 years in prison.

Luis Hernandez, 19; and Juan Barraza, 21, were found guilty in May of the March 17, 2012, slaying of Aliyah Shell, who was caught in the crossfire of a gang turf war, according to Cook County prosecutors.

Judge Stanley Sacks sentenced Hernandez to 65 years and Barraza to 50.

The afternoon of the shooting, Barraza was driving a pickup with Hernandez inside when they pulled up to a home they thought belonged to rival Two-Six gang members in the 3100 block of South Springfield, prosecutors said.

Hernandez got out of the truck, yelled  “TSK”—for “Two-Six Killer”—and “What’s up, b——?” before opening fire, prosecutors said at his trial. He later confessed he saw Aliyah and a 2-year-old on the porch but fired anyway, prosecutors said.

Aliyah was hit several times in the abdomen. She later died at Mount Sinai Medical Center.

Barraza drove them away, but he and Hernandez were arrested shortly after the shooting.

The gun was recovered at the scene and Aliyah’s family members identified both men, prosecutors said.