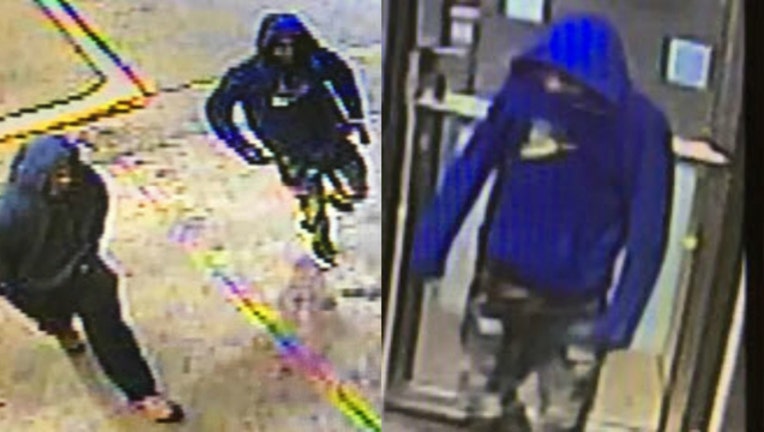 At 7:39 p.m., a man entered the Mobil station at 103rd and Pulaski, pulled out a black handgun and demanded cash, according to Oak Lawn police. Surveillance video showed a second male suspect waiting outside as a lookout.

The first suspect was described as a black man between 25 and 30, 150-175 pounds and wearing a blue hooded sweatshirt and tattered, partially bleached blue jeans, police said. The second suspect was described as a black male between 5-foot-5 and 5-foot-10, 150-175 pounds and wearing a dark hooded sweatshirt, blue jeans and tan shoes or boots.

Minutes later, at 7:47 p.m., officers responded to a robbery at the Payless shoe store in the 6300 block of West 95th Street, police said.

A man and woman entered the store and pretended to shop before approaching the counter, police said. The man threatened the clerk and demanded cash from the register.

The man was described as Middle Eastern or Hispanic, between 20 and 25, 6-foot and 180-200 pounds with short hair and a beard, police said. He was wearing a gray hooded sweatshirt and black gloves.

The woman was described as black, between 20 and 25, 5-foot-2 to 5-foot-5 and 125-145 pounds with shoulder-length curly hair and a skinny build, police said. She was wearing a black hooded sweatshirt, black leggings and black combat boots.

Anyone with information about the robberies should call Oak Lawn police at (708) 422-8292.