New details were released in court Wednesday, which outlined Robert Crimo III's actions the day of the attack.

HIGHLAND PARK, Ill. - Authorities in Lake County have released a photo that shows the gun that was found inside the suspected Highland Park parade shooter's vehicle after he was arrested Monday.

The weapon found in the vehicle was different from the firearm used in the parade shooting. The gun that was used to shoot dozens of people on the Fourth of July was a Smith & Wesson M&P15 semiautomatic rifle, which, according to the manufacturer, is an AR-15 style weapon whose initials stand for military and police.

A Lake County prosecutor identified the make and model of the firearm at a court hearing Wednesday for Robert E. Crimo III, 21, who was ordered held without bail on murder charges.

Police said they recovered the M&P15 rifle in downtown Highland Park and the other rifle in the car that Crimo was stopped in hours later on U.S. 41. 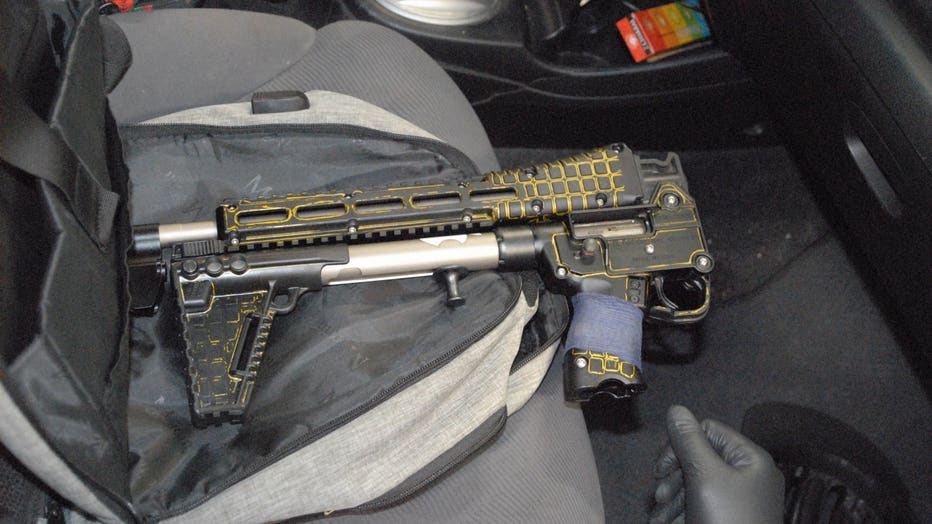 Seven people were killed and dozens more wounded in the rooftop massacre Monday morning as bands played and floats rolled along the downtown streets of the idyllic north suburb.

In charging Crimo, authorities said he fired a 30-round magazine, then fired two more. In all, police found 83 shell casings.

On Tuesday, the Illinois State Police revealed that Crimo had obtained a state firearm owner’s identification card when he was 19 after his father gave him the adult consent he needed.

The state police approved Crimo’s card in December 2020 even though months earlier police had visited his house after getting a report that he threatened to kill himself and his family.

The Highland Park police seized knives from the home, but Crimo’s father said they were his weapons, and the knives were returned, the state police said.

Afterward, the state police got a "clear and present danger" report from the Highland Park Police Department about Crimo’s involvement in the September 2019 incident, but he wasn’t arrested, no order of protection was filed against him, and no "mental health prohibitor" reports were sent to the state police, according to the agency.

According to the state police, that combination of factors meant there was an "insufficient basis" to deny Crimo’s request for a FOID card.

On Wednesday, attorney Steve Greenberg, representing Crimo’s parents, said the father’s decision to consent to his son getting a FOID card was "no different than signing up your kid for driver’s ed."

But Greenberg said Crimo’s father, former Highland Park restaurant owner and onetime mayoral candidate Bob Crimo Jr., "knew something happened, and police took the knives, and he went and got them."

But Greenberg said the father should in no way be blamed for the killings.

"No one thought there was any issue, including the police," Greenberg said. "I think everybody across the board missed whatever warning signs were there — the police, the teachers, the friends, the family, everybody."

On the day of the shootings, before Greenberg was hired to represent Crimo’s family, he tweeted, "This is my hometown where I grew up and raised my kids. WTF is wrong with people. No one needs these high powered weapons!!!!!"

On Wednesday, he defended his tweet, saying "nobody should be able to buy these weapons."

But he said Crimo’s parents "never helped him to buy a single weapon. They just consented to him getting a card."

Greenberg said Crimo renewed his FOID card when he turned 21 "without any parental consent."

The use of a semiautomatic rifle in the Independence Day mass shootings has renewed calls from Vice President Kamala Harris and other Democratic Party leaders for Congress to pass a new ban on semiautomatic rifles, citing their use in numerous killings in recent years including the Uvalde, Texas, school massacre.

The 1994 Public Safety and Recreational Firearms Use Protection Act, commonly referred to as the federal assault weapons ban, was allowed to expire in 2004 under a "sunset" provision during President George W. Bush’s administration.