Speaking after the government issued the jobs report, President Joe Biden said it showed that his $1.9 trillion financial rescue package — which included $1,400 checks to most adults — was already boosting the economy.

WASHINGTON (AP) - America’s employers unleashed a burst of hiring in March, adding 916,000 jobs in a sign that a sustained recovery from the pandemic recession is taking hold as vaccinations accelerate, stimulus checks flow through the economy and businesses increasingly reopen.

The March increase — the most since August — was nearly double February’s gain of 468,000, the Labor Department said Friday. The unemployment rate declined from 6.2% to 6%.

Even with last month’s robust increase, the economy remains more than 8 million jobs short of the number it had before the pandemic erupted a little over a year ago. But with the recovery widely expected to strengthen, many forecasters predict enough hiring in the coming months to recover nearly all those lost jobs by year’s end.

Regaining all those jobs, though, will be a daunting task.

"We can rejoice in these numbers, but we still have a lot of work to do," said Jane Oates, president of WorkingNation and a former Labor Department official. "There are millions of workers we need to get back into jobs."

Bond investors sent yields higher, a sign that financial markets are optimistic about a solid recovery that could produce higher prices for some goods and services. The yield on the 10-year U.S. Treasury note rose from 1.68% to 1.71%. Stock markets are closed for Good Friday.

The brightening outlook for the labor market follows a year of epic job losses, waves of coronavirus infections and small business closures. Numerous signs suggest that the economy is improving. Consumer confidence in March reached its highest level since the pandemic intensified.

A survey found that manufacturing grew in March at its fastest pace since 1983. And vaccinations are increasingly being administered, although new confirmed infections have risen from lower levels in recent weeks.

Speaking after the government issued the jobs report, President Joe Biden said it showed that his $1.9 trillion financial rescue package — which included $1,400 checks to most adults — was already boosting the economy. Biden argued, though, that further assistance in the form of the infrastructure package his administration unveiled this week, was needed to sustain the gains. 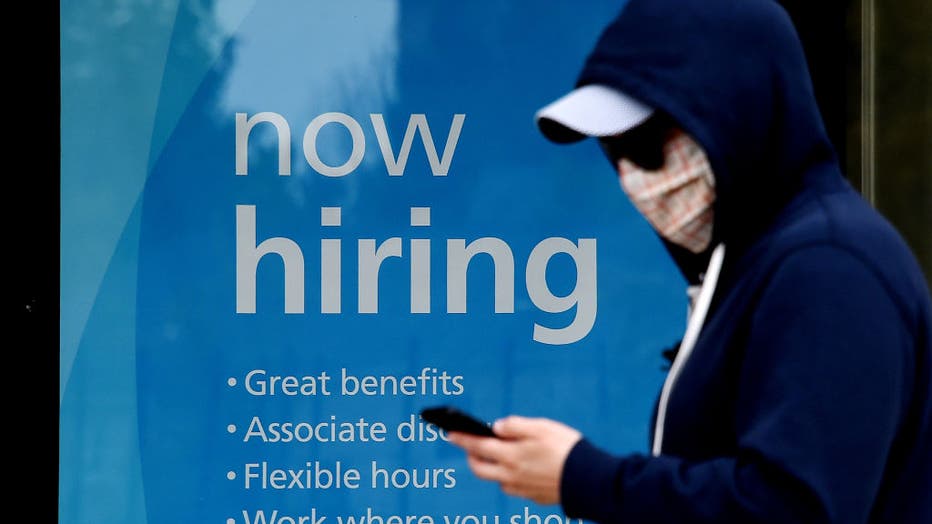 A man wearing a face mask walks past a sign "Now Hiring" in front of a store amid the coronavirus pandemic on May 14, 2020 in Arlington, Virginia. (Photo by OLIVIER DOULIERY/AFP via Getty Images)

"The fight’s far from over," the president said in televised remarks. "The progress we’ve worked so hard to achieve can be reversed."

Yet many Republican lawmakers have already pointed to the burgeoning economy as evidence that further government support isn't needed.

Last month, hiring strengthened across the economy. Restaurants, hotels and bars — the sector most damaged by the virus — added 216,000 jobs. Construction companies, aided by better weather after severe storms in February, gained 110,000.

Manufacturers added 53,000. And professional and business services, which include such well-paying fields as engineering and architecture, gained 66,000.

The pandemic recession inflicted job losses disproportionately on racial minorities and lower-income workers. Wealthier and well-educated workers have been far less likely to lose jobs, in large part because of a greater ability to work from home. Much of the hiring now occurring at bars, restaurants and other areas of the hospitality industry is helping to close that gap, though there's still a long way to go.

Last month, in an encouraging sign, about 500,000 women returned to the workforce and found jobs, in part a reflection of school re-openings around the country. Women disproportionately quit jobs or stopped looking for work during the pandemic, in many cases because they had to care for children attending school online from home. A reversal of that trend will be important as employers seek to rapidly rehire.

Friday's jobs report pointed to some challenges ahead. The number of people who have been out of work for six months or more — who tend to face a particularly hard time finding a job — increased. They now constitute more than 40% of the unemployed.

And the number of people who say they've permanently lost their jobs barely declined in March. Many of the people who did find jobs last month had been classified as temporarily unemployed.

But optimism is rising, in part because the $1,400 checks in Biden’s economic relief plan have sharply increased consumer spending, according to Bank of America’s tracking of its debit and credit cards. Spending jumped 23% in the third week of March compared with pre-pandemic levels, the bank said.

Spending had begun to rise in March even before the stimulus checks arrived as viral case counts have tumbled from their heights in January. Americans are increasingly willing to venture out from home to travel and eat out, though not yet at their pre-pandemic pace. Roughly 1.5 million people traveled through airports on March 28, according to the Transportation Services Administration. That was roughly eight times the figure of a year ago, although it was still down sharply from 2.5 million on the same day in 2019.

Hiring is increasing in higher-paying industries such as information technology and finance — a sign of growing confidence in the recovery. Businesses typically add such jobs only when they feel sure their customer demand will be sustained.

One high-tech company that's expanding its workforce is Olive, a healthcare artificial intelligence company based in Columbus, Ohio, that links up disparate billing and insurance systems. The 600-person company has 90 open positions, including jobs for software engineers, product managers and financial analysts.

Olive has decided to continue remote work even after the pandemic has been controlled, said Sean Lane, the CEO. Productivity has increased since the company went remote, allowing him to recruit from nearly anywhere in the country. The company now has employees in 40 states.

President Biden delivered remarks on Wednesday and stressed the time is now to act on his infrastructure plan. Biden said that he plans to raise the corporate tax rate and eliminate deductions that corporations are receiving for off-shore jobs.

"Our customers ... are eager to adopt several new technologies we are rolling out this year," Lane said. "We are confident in our growth plans."

Still, the surge of hiring last month raises an important question: Can it continue at the same pace? Besides the 8.4 million fewer jobs that now exist in the U.S. economy than just before the virus struck, an additional 2 million or so jobs would have been added in the past year under normal circumstances. That means the U.S. economy still needs roughly 11.5 million more jobs to regain something close to full health.

Louise Sheiner, a senior fellow at the Brookings Institution and formerly an economist at the Federal Reserve, has estimated that hiring could average between 700,000 and 1 million a month for the rest of the year, if the economy expands at the 6.5% pace that the Fed and many economists expect. That would leave total job growth for 2021 at somewhere between 7 million and 10 million.

In part, her forecast is based on the fact that the pandemic recession has deeply hurt labor-intensive parts of the economy, from hotels and restaurants to health care and the entertainment industry. A recovery in those sectors, even a partial one, would require significantly more hiring. In addition, Sheiner said, higher consumer spending, fueled by stimulus checks and pent-up savings, should drive job growth in other industries.