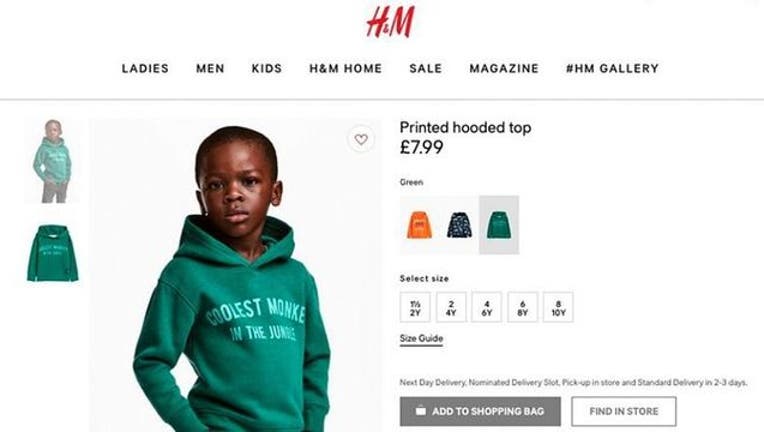 An ad featuring a black child in a hooded sweatshirt reading "Coolest Monkey in the Jungle" has caused outrage on social media. (H&M UK)

FOX NEWS - H&M was forced to offer an apology on Monday after posting an online advertisement featuring a black child modeling a sweatshirt reading “Coolest Monkey in the Jungle.”

“We sincerely apologize for offending people with this image of a printed hooded top. The image has been removed from all online channels and the product will not be for sale in the United States,” wrote H&M in a statement obtained by Fox News. “We believe in diversity and inclusion in all that we do and will be reviewing all our internal policies accordingly to avoid any future issues.”

Outrage over the ad bubbled up on Sunday, after social media users noticed that H&M’s U.K. website was advertising this particular hooded sweatshirt using a young black child, while other sweatshirts from the same line were advertised on white models.

Social media users on Twitter soon began accusing the brand of racism, and even profiting from any resulting online backlash this incident may cause. One woman, who said she had worked for H&M, claimed the Sweden-based retailer is sometimes “clueless” to issues of “racism, cultural & social challenges.”