Some Texas residents are being slammed with electric bills of more than $10,000 after a historic winter storm. Credit: Akilah Scott-Amos via Storyful

SPRING, Texas - After unusual icy weather left millions of Texans without power, some are facing another crisis: Sky-high electricity bills.

Some Texas residents are being slammed with electric bills of more than $10,000 after a historic winter storm wreaked havoc on the state’s electric grid, prompting an investigation into power failures that impacted millions.

Akilah Scott-Amos, a 43-year-old resident of Spring, Texas, was one of those unfortunate residents. In a February 17 live stream, she asked for help after being charged with abnormally high electric bills.

In the live stream, Scott-Amos explains she’s been a customer with wholesale electric provider Griddy since 2018, but her daily payments skyrocketed after the storm that began on February 14.

She begins the video by documenting her daily Griddy statements from February 10 to February 20. Her daily statements started as $1.64 on February 10 and jumped to $1,089.72 by February 19, according to screenshots provided by Scott-Amos.

On February 20, her daily statement was down to $5.24, but she had already racked up a balance over $11,000 as the high daily charges compiled on top of each other.

Scott-Amos’s Griddy bill for the month of February in 2021. (Akilah Scott-Amos via Storyful)

Scott-Amos said Griddy warned her to switch electric providers on February 13, but she wasn’t able to make the change immediately. She said she switched to TXU Energy but wasn’t able to switch over officially until February 22.

In her Facebook live stream, Scott-Amos also said Griddy advised her to turn off her power completely and go to a hotel. But Scott-Amos said it wasn’t viable advice. She said she was concerned to leave her home unattended during the disaster, and her family also includes two children and a dog.

Griddy said on February 18 that its high prices were a result of the Public Utility Commission of Texas (PUCT) directing the Electric Reliability Council of Texas (ERCOT) to change its pricing "until the grid could manage the outage situation after being ravaged by the freezing winter storm."

The price change of $9/kWh was "approximately 300x higher than the normal wholesale price," according to Griddy. "That is gouging. And that is taking advantage of people. We’re in a pandemic, and not only that, now it’s a natural disaster," Scott-Amos said of her high bills.

On February 19, Griddy said that it is "seeking customer relief" and communicating with ERCOT and PUCT. The company also said it will credit customers "dollar-for-dollar" on any relief received. 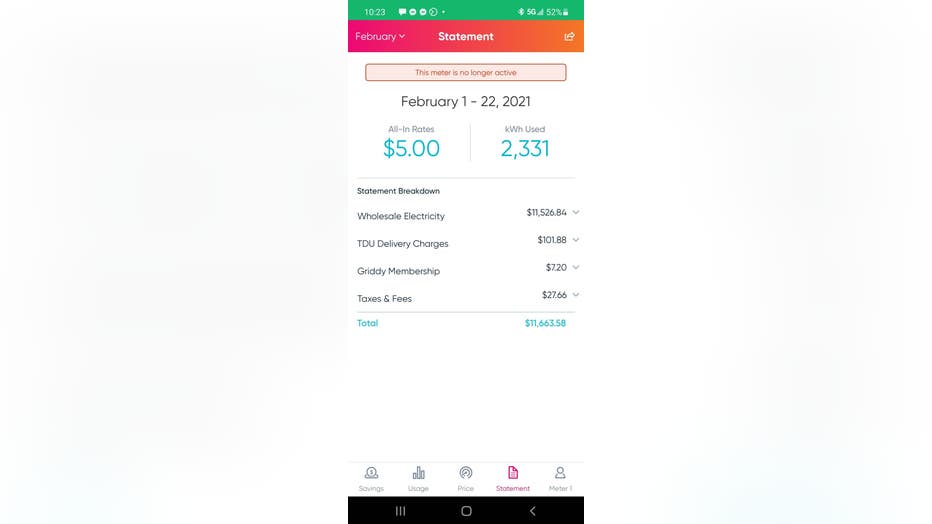 Scott-Amos’s outstanding Griddy bill after the winter storm. The screenshot, taken on February 22, also shows that Scott-Amos’s meter was no longer in service. (Akilah Scott-Amos via Storyful)

Storyful had contacted Griddy directly but did not hear back by the time of writing. Storyful did receive an automated email reply referring Griddy customers to the company’s Deferred Payment Plan, which requires customers to pay their total balance in five equal monthly installments. The plan also prohibits customers from switching providers until the Griddy balance is paid.

Scott-Amos said she won’t be using the Deferred Payment Plan for her outstanding balance of $11,048.75. "I am not doing the deferred billing plan because that feels like saying this is okay and it’s not. I am waiting to see what relief will be offered," Scott-Amos told Storyful.

Storyful contributed to this article