The 56-year-old governor said was eligible for the vaccine as a government worker and stepped up at the mass vaccination site on the Illinois State Fairgrounds to set an example.

"I’m deeply grateful that so many of our residents have embraced this life-saving protections, but I also want Illinoisans to know, especially those who may not yet feel confident enough to get vaccinated, that I’m not asking you to do anything that I wouldn’t do myself," Pritzker said.

"Look, I’m not a doctor, but I trust doctors and ... these vaccines offer us all the fastest way back to normal life," he added.

Pritzker received the more recently approved Johnson & Johnson vaccine, which requires only one shot. The Pfizer and Moderna vaccines require a second dose several weeks after the first. 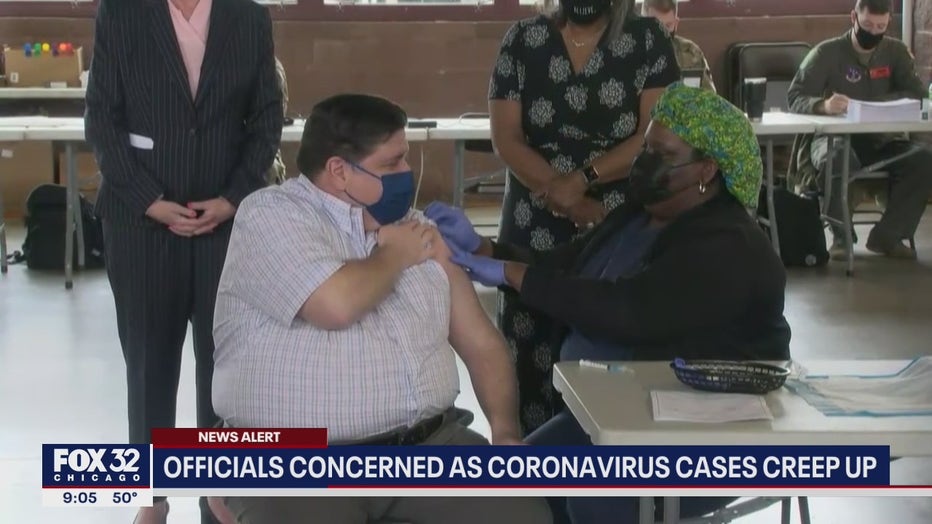 Coronavirus case numbers have been creeping up in Illinois in the last week after plummeting in recent months. State and national experts have warned against complacency, which could lead to yet another surge, particularly with new variants spreading across the country.

Officials reported 2,793 new cases on Wednesday with 20 additional deaths. That adds to a total death toll of 21,136 among 1.23 million confirmed or probable cases. The seven-day test positivity rate is 3.1%, up one-half of 1% from the previous week.

With an adjustment in data collection, the number of shots administered jumped 4% in a day. The Illinois Department of Public Health discovered about 100,000 doses not uploaded into statewide totals because only partial information had been added about recipients. Software coding was adjusted to accept those reports, and pharmacies have been reminded to fully complete vaccination reports.

The average number of doses administered daily in the past week is nearly 98,000.

Further details on how shots would be distributed to eligible students in the nation’s third-largest district were not released. Starting April 12, Illinois will allow anyone age 16 and older to get COVID-19 vaccines, but Chicago has had its own timeline.

The district and Chicago Teachers Union are negotiating plans to reopen high schools, which have been closed for a year amid the pandemic. School officials said all employees have been offered vaccines, but district data on how many have accepted shots is incomplete.