A big construction project at JB Pritzker’s Wisconsin horse farm has some questioning whether the governor is honoring the spirit of his own stay-at-home order.

CHICAGO - A big construction project at Gov. JB Pritzker’s Wisconsin horse farm has some questioning whether the governor is honoring the spirit of his own stay-at-home order.

FOX 32 wandered over the Wisconsin border into Kenosha County and found more than 20 construction workers -- nearly all from Illinois -- helping build a massive new home and several outbuildings on Pritzker's horse farm. 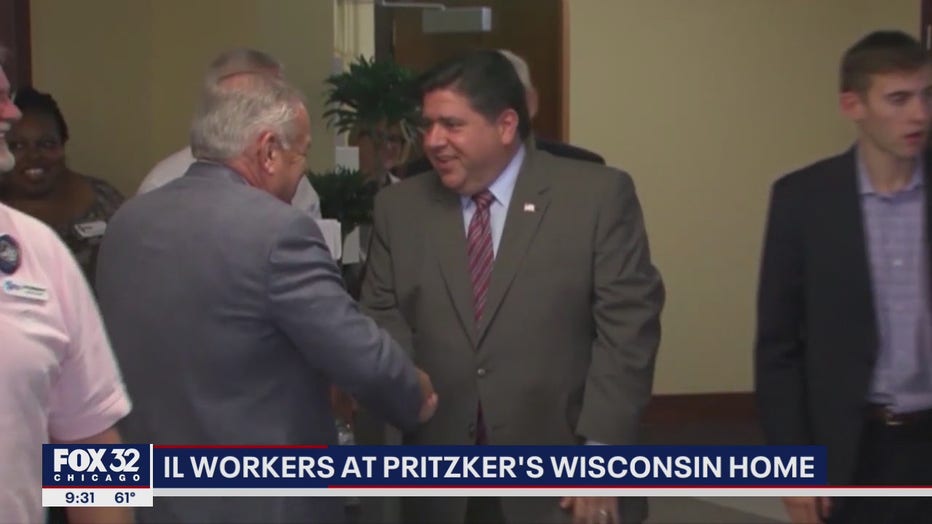 We did not get a warm welcome.

"Anything better to do?" one woman asked.

"Which is just really stupid," the woman responded.

"Cause he's doing a great job, don't you think?" the woman said.

Pritzker has been generally praised for his handling of the COVID-19 crisis, which includes an appeal to limit travel.

But when FOX 32 obtained the permits for the 7,000 square-foot, $2.5-million project, we found a lot of people would be traveling from Illinois to build it.

All but one of the listed contractors is based in Chicago or its suburbs, and we saw cars and construction vehicles with Illinois plates leaving the project and turning south into the Land of Lincoln.

That frustrates neighbors who live just on the other side of the border.

"Just crazy. I drive by all the time and there's at least 20, 30 trucks a day working on this place. Which is great, Keep people working. But you don't want your Illinois residents working. I really don't understand that,” Mike Wendricks said.

The governor's horse farm made news last week when Republicans raised questions about his wife and daughter traveling to Wisconsin during the shutdown.

One Republican critic of the stay-at-home order says the traveling construction workers smacks of hypocrisy.

"He's saying they don't want to have any unnecessary travel,” said state Rep. John Cabello of Rockford. "It seems as though he has one set of rules for himself while everybody else has to abide by his stay-at-home order."

In Wisconsin, there are virtually no limitations on public accommodations after its Republican Supreme Court struck down their governor’s stay-at-home order.